Shipwreck Found in Lake Michigan: The Sinking of the L.R. Doty as Covered in 19th-Century Newspapers 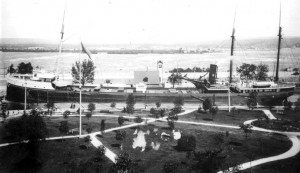 On June 24, the Associated Press (AP) distributed an article about the recent discovery of the L.R. Doty, a steamship that sank in Lake Michigan in 1898.  The article begins:

A great wooden steamship that sank more than a century ago in a violent Lake Michigan storm has been found off the Milwaukee-area shoreline, and divers say the intact vessel appears to have been perfectly preserved by the cold fresh waters.  "Finding the 300-foot-long L.R. Doty was important because it was the largest wooden ship that remained unaccounted for," said Brendon Baillod, the president of the Wisconsin Underwater Archaeology Association.

When the L.R. Doty sank on October 27, 1898, the reports about its demise were numerous.  A brief article in the October 28, 1898 issue of the Dallas Morning News only listed the names of the captain, the chief engineer, and the first mate. 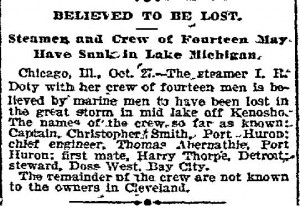 On the same day, an article in the Idaho Daily Statesman provided additional information about debris and wreckage spotted by the tug boat Prodigy, about 25 miles off shore from Kenosha, Wisconsin 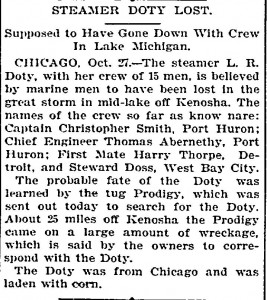 The L.R. Doty was not the only ship to sink in the Great Lakes during the 1898 season.  As was reported in the December 26, 1898 issue of the Duluth News Tribune, 569 individuals lost their lives to maritime accidents in the freshwater seas on the Canada-U.S. border.  Lake Michigan recorded the largest number of losses. 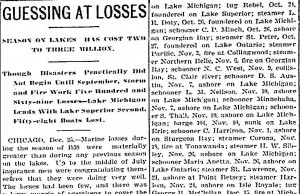