The Short-Lived Republic of West Florida: A Tale of Deception and Intrigue

The Short-Lived Republic of West Florida: A Tale of Deception and Intrigue 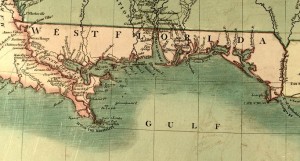 This year marks the 200th anniversary of the Republic of West Florida, which existed from September 23 to December 10, 1810. The history of West Florida is a tale of deception and intrigue. The territory changed hands frequently, passing from France to Great Britain and then to Spain. Spain hoped to encourage settlement in West Florida and offered huge grants of land to immigrants. West Florida soon became home to an eclectic mix of settlers and scoundrels. Colonists who had opposed the American Revolution found sanctuary in West Florida. So did American land speculators, criminals and army deserters. Although the population was largely Anglo-American, West Florida remained loyal to Spain. In 1804, the inhabitants of West Florida had helped to quell an uprising instigated by three American brothers. 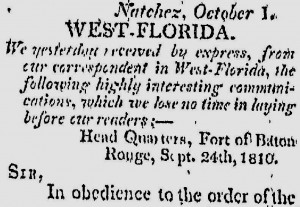 In 1808, however, Napoleon Bonaparte deposed King Ferdinand VII of Spain and placed his brother Joseph on the throne. Colonists had no loyalty to Bonaparte. On July 25, 1810, a group of West Florida settlers organized a convention to discuss their grievances with the Spanish government and work for reform. Although the governor of Florida had sanctioned the convention, he refused to implement any of the suggested reforms. 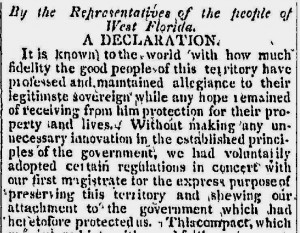 In the early morning hours of September 23, 1810, a group of armed settlers led by Philemon Thomas attacked the Spanish fort at Baton Rouge. After a brief skirmish, the attackers took control of the fort. Three days later, the Republic of West Florida declared its independence. The declaration perfectly suited President James Madison. Madison, like his predecessor Thomas Jefferson, had long hoped to acquire West Florida for the United States. Madison believed that West Florida, as a former French possession, belonged to the United States as part of the Louisiana Purchase. Spain vigorously denied this claim, and attempts by the United States to purchase West Florida failed. On October 27, 1810, Madison issued a proclamation annexing West Florida. He ordered troops into West Florida, ostensibly to keep it from falling into the hands of Great Britain. The United States military fully occupied the territory on December 10. Spain and its ally Great Britain were too occupied with war in Europe to contest the American action. 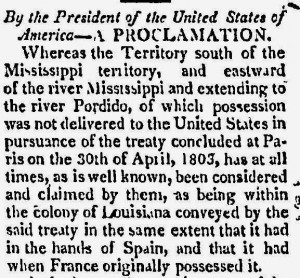 Madison’s actions were very controversial. He had sent military forces into the territory of a friendly nation without the consent of Congress. This was technically an act of war. Many suspected that Madison had encouraged the revolution in West Florida. The fact that West Florida’s president Fulwar Skipwith had been American diplomat to France and political ally of both Jefferson and Madison seemed to indicate this was the case. In 1811, the western part of West Florida was attached to the Territory of Orleans, which became the State of Louisiana in 1812. The eastern sections became part of present day Mississippi and Alabama.
Tags
Filed under