By the middle of the 19th century many countries had signed treaties for the abolition of the slave trade. Included in the June release of Afro-Americana Imprints, 1535-1922: From the Library Company of Philadelphia are treaties between Great Britain and several other countries, namely Venezuela, Haiti, Chile, Ecuador, Belgium, and, finally, the United States. The sentiment behind the changing international political atmosphere was shared by many, but, as seen in additional highlights from this release, was also slow to spread and remained far from universal.

Treaty between Her Majesty and the Republick of Venezuela, for the Abolition of the Slave Trade (1840) 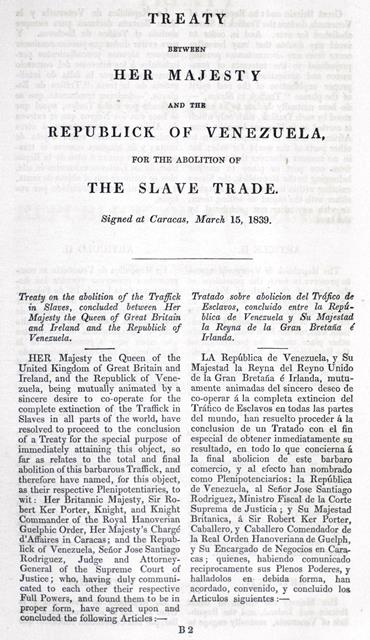 Convention between Her Majesty and the Republick of Hayti...for the More Effectual Suppression of the Slave Trade (1841) 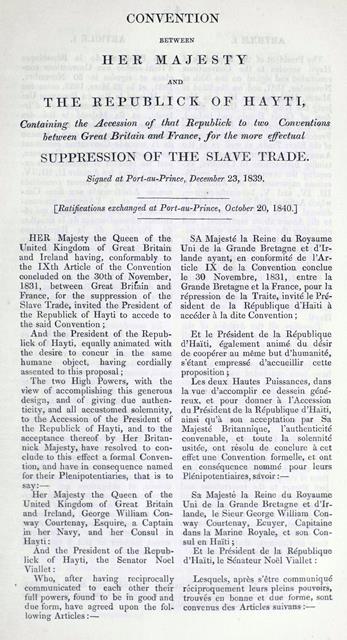 Treaty between Her Majesty and the Republic of Chile, for the Abolition of the Traffic in Slaves (1843) 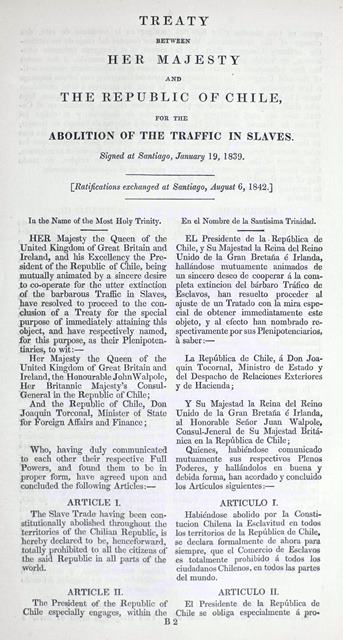 Treaty between Her Majesty and the Republick of the Equator, for the Abolition of the Traffick in Slaves (1847) 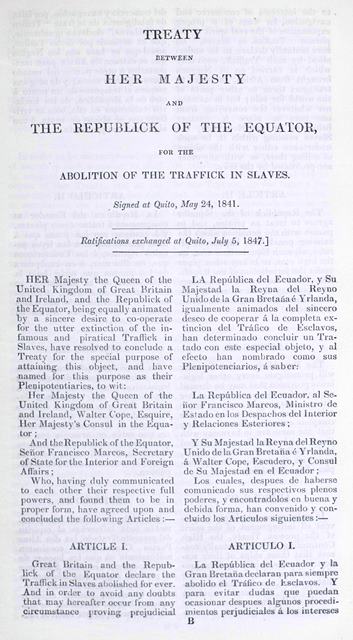 Treaty Containing the Accession of Belgium to the Treaty Signed at London, December 20, 1841, for the Suppression of the African Slave Trade (1849) 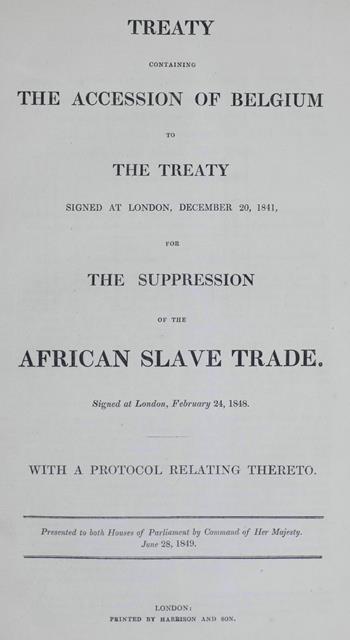 Treaty between Her Majesty and the United States of America, for the Suppression of the African Slave Trade (1862) 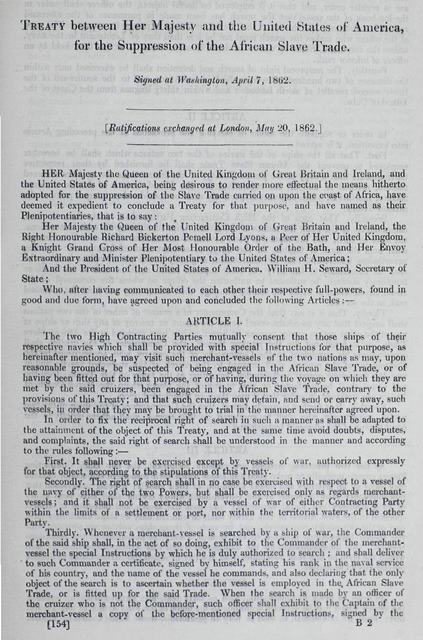 Who Is to Blame? or, Cursory Review of “American Apology for American Accession to Negro Slavery” (1842)
By James Grahame

Twenty years prior to the treaty between Great Britain and the United States, James Grahame, a Scottish historian and abolitionist, wrote this critical review, published in London, in which he noted the hypocrisy of Americans:

The Americans, with continual application of flattering unction to their own souls, and ostentatious challenge of the world’s admiration, plume themselves on being, of all the nations who have flourished in ancient or in modern times, the people by whom civil and political liberty has been most justly and nobly appreciated, most gallantly achieved, and most faithfully and successfully cultivated, preserved, and extended. To the plain uncorrupted understandings of honest men in every other country, this American claim appears seriously impeached in truth and value by the actual subsistence of negro slavery in America; and the Americans are everywhere taxed with the disgrace of peculiar treachery to those generous principles of which they profess themselves the most ardent and praiseworthy votaries.

Eighteen years after Grahame’s oversimplification of the professions of Americans, dissent in the U.S. on the subject of slavery was quite apparent. In fact, even within the Democratic Party opposing views on the politics of slavery in the territories had become passionate. Arguing for non-intervention by Congress in the legislation of the territories in regard to slavery, and speaking of internal party dissent on the subject, William Montgomery said,

I sincerely deprecate this discussion. I regret that the gentleman from Alabama has thought proper to drag our little party differences into discussion on the floor of Congress. This is not the place in which these differences can be adjusted. Nor is this the time, when an active, vigilant, powerful enemy is in the field seeking our overthrow, to stir up civil war in our ranks. The voice of every friend of the party and of the country should now be raised in support of harmony, concession, and united action. I regard this discussion as unwise, ill-timed, and impolitic. It is an act of treason to the best interests of the party, and gives aid and comfort to the enemy.

As dismayed as was James Grahame by American hypocrisy, one can only guess at his disappointment in the perception of his fellow British subject, James Greenwood. In the introduction to this work, published in London, Greenwood describes the difficulty for an “English gentleman of modern times” to “succeed in realizing, for his contemplation and instruction, a perfect Savage” which he goes on to describe as…:

a wild uncultivated barbarian, whose mind would be a desert but for the rank unwholesome weeds which are indigenous to the soil, and which are watered by his superstitious tears, and kept green by precious memories of those renowned men his father and grandfather, a being whose sympathies are bounded by the skin that covers him; whose carcass is often an evil to the eye and ever unpleasant to the nose; who has, for manly trust and hope, the sorry substitute of suspicion and quaking fear; and whose mistrust of life is only exceeded by his mistrust of death, which he dreads like fire.

However disappointing Greenwood’s views may have been, the vivid illustrations by F.W. Keyl and R. Huttula included within his work are impressive. 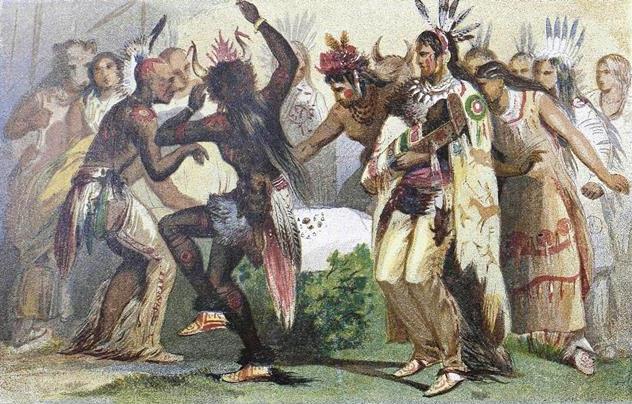 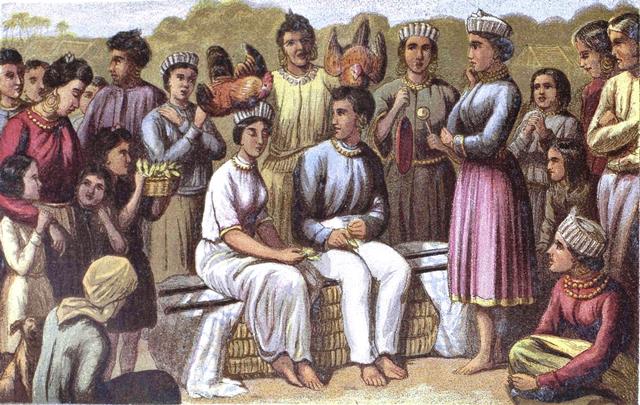 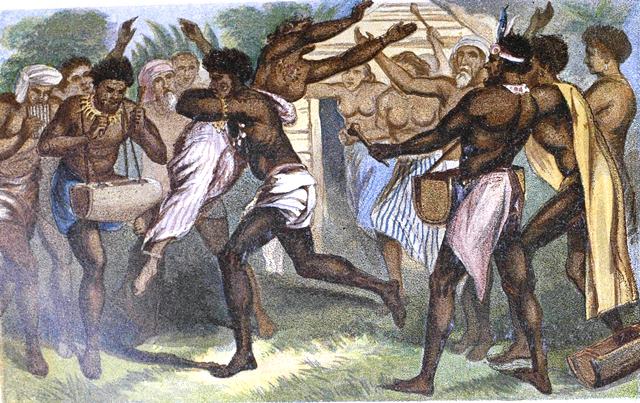 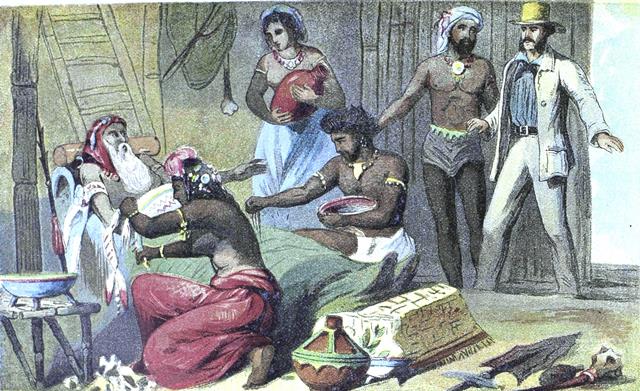 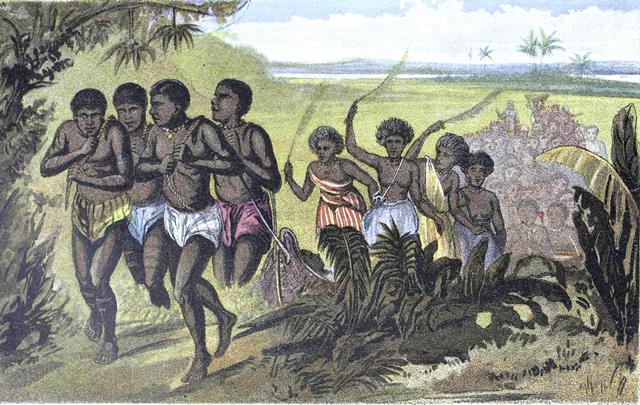