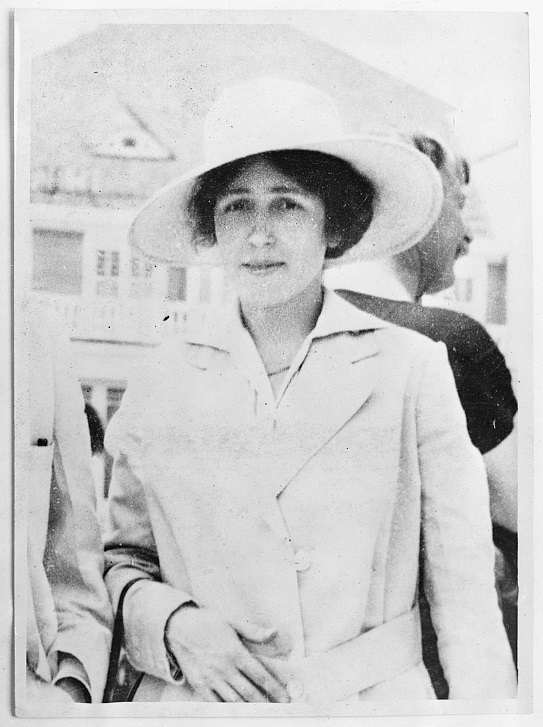 While the Boston area reeled under the burden of the epidemic, the influenza outbreak was spreading rapidly. On the same date, October 21, 1918, the Belleville News Democrat called the Illinois city of Mascoutah “the Center of Influenza Epidemic in St. Clair County with Three Hundred Cases…” and the Aberdeen Daily News announced “Influenza Epidemic Checked in Boston.” The article in the Aberdeen newspaper continued:

Normal conditions were resumed in this city today when places of public assembly were allowed to reopen by health officials. The places had been closed for nearly three weeks because of the epidemic of influenza which caused nearly 1,000 deaths here. 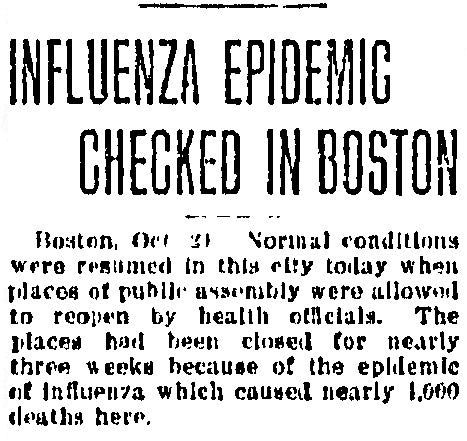 Meanwhile, the article in the Belleville paper declared:

Influenza has invaded Mascoutah and today it is reported that there are about 300 cases in the city. Three deaths have already been reported and many more of those afflicted with the disease are said to be seriously ill. New cases are reported hourly.

The Illinois city had begun to establish some prophylactic measures.

...schools, churches and all meeting places have been closed for some time past. The saloons are still open but congregating in them or playing cards is forbidden. 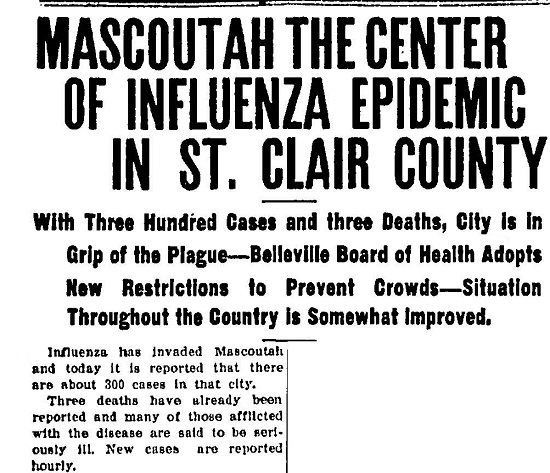 Some physicians found that alcohol was a useful palliative in treating influenza patients, but many places in the country were dry. In Atlanta, as reported by the Macon Telegraph on October 25, 1918: “‘Flu’ Epidemic Strikes Snag in Bone-Dry Law.’” In presenting local medical views, the Telegraph reported “there are other methods of treatment the doctors do not deny, but their claim for the liquor is on the basis that its use under directions is the best thing we know of.” The matter was referred to the chief of police, but the article stated “there is no prospect, legally, of the relief thus sought.” However,

As a matter of cold fact, despite the bone-dry law, there is a considerable quantity of liquor being used in “flu” cases in Atlanta—and quite some of it where there are no cases: “just to keep it off.” 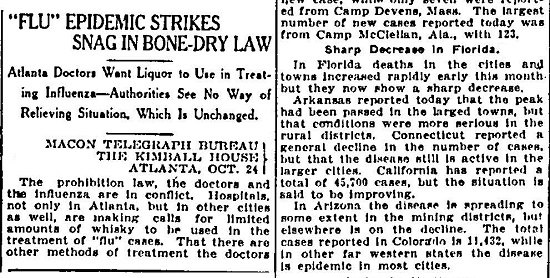 Liquor may have had a valid use in treatment, but snake oil salesmen were attempting to cash in on the tragedy. On Oct. 27, 1918, the Colorado Springs Gazette warned its readers that the

Use of vaccines in combating or treating Spanish influenza has not gone beyond the experimental stage so far as the United States public health service has been able to learn.

The article included a statement from Rupert Blue, the U.S. Surgeon General, with a warning:

The health service urges the public to remember that there is no specific cure for influenza and that many of the alleged “cures” and remedies being recommended by neighbors, nostrum vendors and others do more harm than good. 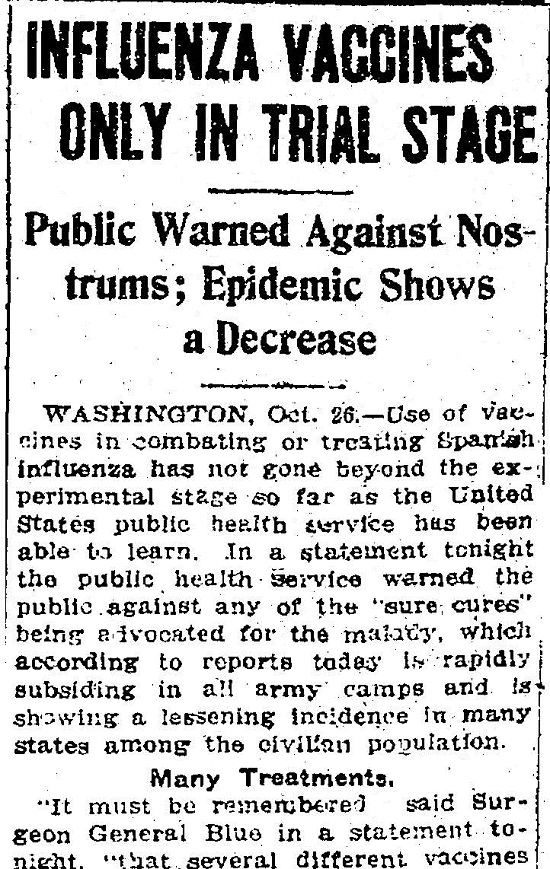 One particularly opportunistic manufacturer promoted Oil of Hyomei, which was sold with an inhaler. Its maker induced many newspapers across the country to run an identical article, unattributed, with the same headline: “Spanish Influenza Is Epidemic Here. Many Cases Develop Into Deadly Pneumonia. Easier to Prevent than Cure. How to Avoid.” Of course, the cure was their product. Decades later the Journal of the American Medical Association concluded: “This mixture never cured anything, unless it was impecuniosity in its exploiter.”

The planted advertisement disguised as a news article concluded with an exhortation.

Hundreds of people in [insert name of newspaper's location] and vicinity keep a Hyomei outfit with inhaler on the bathroom shelf for regular winter use. If you have one get it out now and use it. If you haven’t, go to the nearest drug store and get one today. It is the duty of every person, not only for his own sake but for the community to do all in his power to prevent further spread of this epidemic and to stamp it out.

Across the nation more events and amusements were banned. In New Orleans, Halloween celebrations were forbidden. The Times-Picayune reported

Hallowe’en parties are proscribed. Dr. Corput and Dr. Robin have declared that such gatherings are included in the inhibition of the resolution of the Board of Health….Instead of spooks and goblins riding broomsticks through the air there is a mysterious demon distributing sickness and death throughout the land and it must not be permitted to spread its deadly germs where the young may gather for innocent pleasures of the mysterious Hallowe’en.

On Oct. 30, 1918, the Idaho Statesman’s headline was “Stricter Rules May Be Needed To Curb Influenza.” The epidemic was spreading in Idaho, and its state board of health sent telegrams to Surgeon General Blue,

…urging that travel be restricted during the epidemic of Spanish influenza to persons who can furnish affidavits that it is necessary for them to be upon the railroads for business or urgent reasons, and suggesting that all travelers be required to wear masks…

The issue of community quarantine in Idaho was on the boil.

Dr. S.F. Wright of Salmon had advised that the local board of health there had tried to quarantine the county against the outside, especially Butte, Mont., but that the superintendent of the G. & P. railroad had refused to comply with the order… 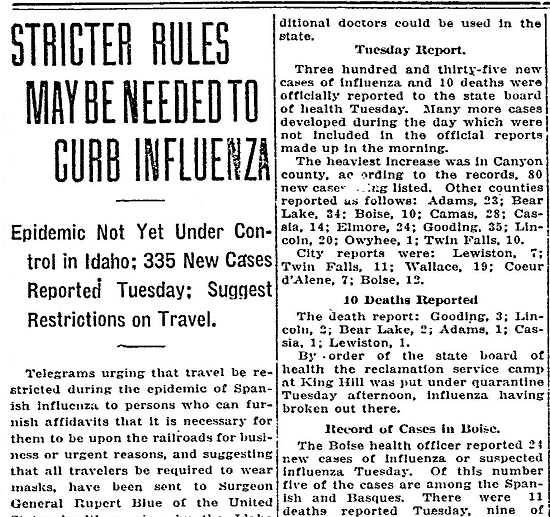 Also, on Oct. 30, the Oregonian had only bad news, including the fates of specific individuals.

The Spanish influenza epidemic yesterday showed no signs of a let-down. New cases for the past 24 hours were 203, while deaths reported were 27. In the 48 hours previous 30 deaths and 212 new cases were reported. Portland’s death list total is now 172. Conditions in the city undertaking establishments are slightly improved. Additional men are being put on by nearly every big downtown establishment…

Death of Mrs. Wendle Ulrich, of Bridgeton, Or., at the Good Samaritan Hospital yesterday followed that of her husband, Charles Ulrich, a fisherman, the day before. Both succumbed to influenza.

Burial of the body of L. Williamson, who died from influenza last week, awaits the arrival of bodies of his wife and two children, all of whom were victims of the epidemic in Salt Lake City.

The article concluded with a long list of names, ages, and occupations of many other victims.

Many articles appeared across the country in the first two weeks of November reporting the ebb of the epidemic in some locations and the alarming wave of infections in others. One of the Oregonian’s headlines during this period was “Epidemic Takes Athletes.” It recounted the names of some of “the nearly score of men who were well known.” 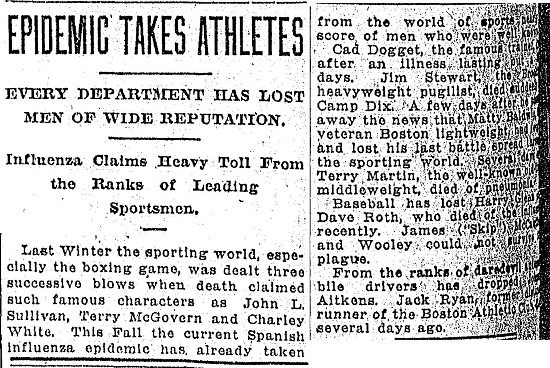 Despite the easing of bans on public gatherings in some communities, the city of Spokane was intent on maintaining the bans, as reported by the Oregonian on Nov. 15:.

The influenza ban is still on. There is little prospect of its being lifted for a week or 10 days, at least. All prospects of a resumption of business and social activity in Spokane were dispelled today in the face of unanimous recommendations by physicians, ministers, school patrons and other citizens that the lid remain on for at least a week longer. 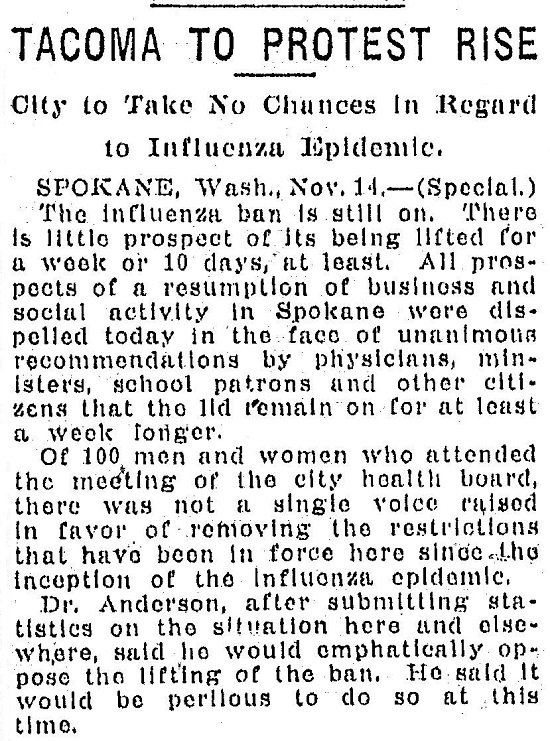 By late Nov. 1918 some retrospective and “lessons learned” articles began to appear. Perhaps inevitably, bigotry crept into the analyses. The Lexington Herald in Kentucky published an article on Nov. 26 “from The Medical Council.” It focused on the infection and death rates in Boston, especially as they pertained to hygiene.

In a district in Boston largely occupied by foreigners and the houses swarming with people, conditions were so bad there was difficulty in procuring a sufficient supply of caskets in which to bury the dead.

In contrast to the tenements, “in true American homes, with one family only, the incidence was comparatively light and but a small proportion developed serious complications.” 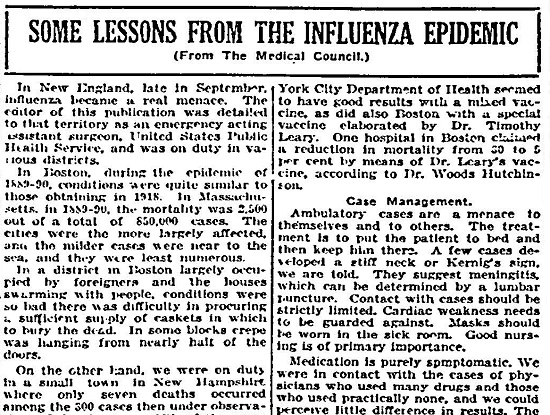 Beyond the deaths, economic losses, and public expense, there were other consequences of the influenza epidemic. On December 18, 1918, the Philadelphia Inquirer reported that 50,000 orphans had been created in Pennsylvania and were in need of placement.

Dr. Royer believes that when the canvass is complete it will be found that the influenza has left in its wake between forty and fifty thousand orphans throughout the State, in addition to thousands of saddened homes from which at least one parent is missing. 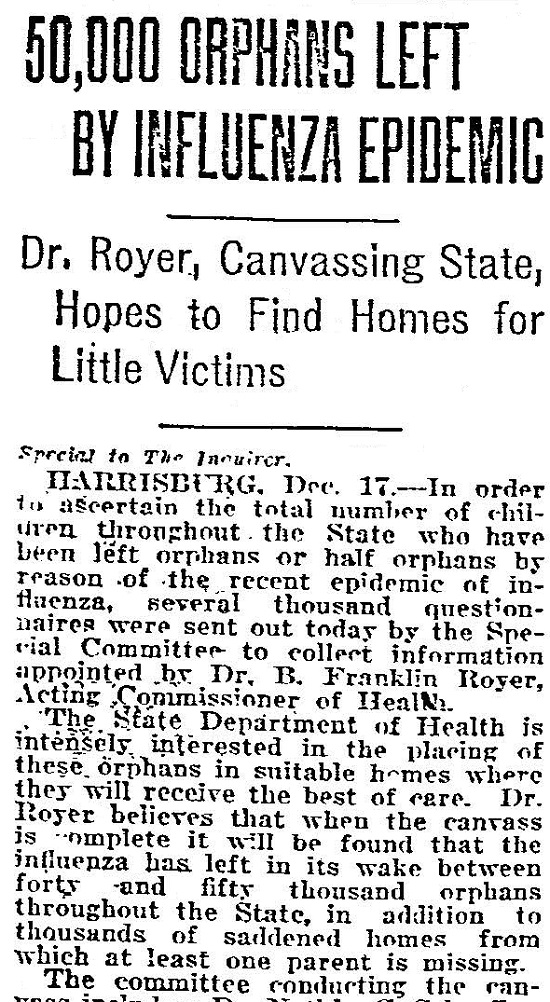 The next day, the San Jose Mercury News had dispiriting information. There were 94 new influenza cases, 35 new pneumonia cases, and one death. Citizens were encouraged to wear masks which have proven to be

…a most efficacious weapon against the spread of influenza….The corps of inspectors which is scouring the city in an effort to stamp out the epidemic reported yesterday that generally speaking the women of San Jose are wearing the mask more conscientiously than the men. In many instances there is a pronounced carelessness. Filthy masks, which are a menace not only to the wearers but also to the public, are being worn on the street according to the health department. These will not be tolerated. 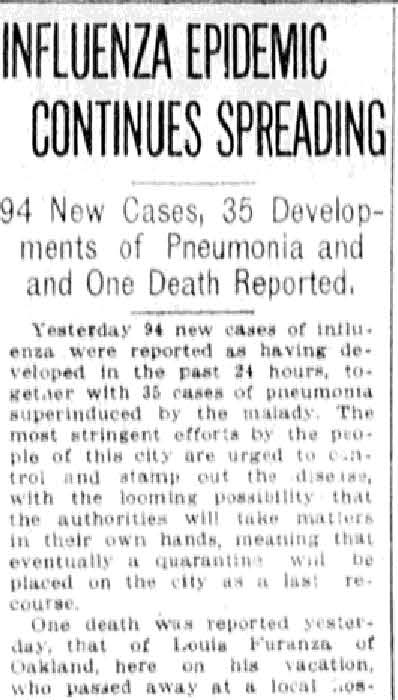 By Dec. 24, 1918, the members of the American Public Health Association predicted that a new epidemic, perhaps “even more virulent than [the] recent outbreak,” was to be expected in 1919. In a report published by the Philadelphia Inquirer, the APHA further surmised that even greater tolls could be expected in 1920.

Also it is pointed out that in previous epidemics the second and third outbreaks have been more virulent and attended by a higher mortality rate then were the initial manifestations. 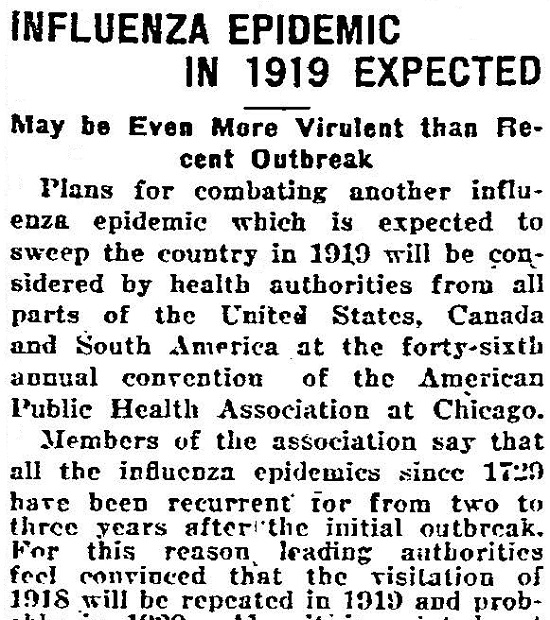 On New Year’s Eve, the Fort Wayne News Sentinel in Indiana published an article with a headline and two sub-headlines:

INFLUENZA MAY COME BACK.

Grip Is Breaking Out Again In Many Sections.

This was true, but the article quickly shifted into an explicit advertisement for Father John’s Medicine.

San Jose was one of many cities to have repurposed buildings to serve as temporary hospitals. Although the disease was by no means finished within the United States, the end of the old year also concluded with a brighter note in some locations. The San Jose Mercury News reported:

The conditions for San Jose and adjoining territory seem to be on a direct road to improvement as far as influenza is concerned….At all the local hospitals, the conditions were reported as better, nearly all those ill were doing nicely and the percentage of new cases had dropped to a very small number…

Read part 1 of this series on the 1918 Pandemic here. For more information about bringing Early American Newspapers to your institution, please contact Readex.