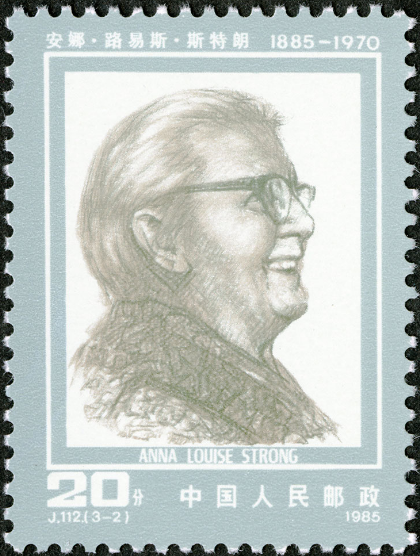 Explosions like a thunderstorm brought me outdoors about 11:30 the morning of August 2. An interpreter urged me to go at once to the shelter. Hurrying through the hot sunshine, he kept apologizing that the air-raid warning was very late because nobody expected a raid. Squinting against the bright sun, I saw a plane almost straight up above me seeming uncomfortably close but probably a couple thousand feet in the air. I was at the time on the west bank of the river which divides Yenan into two parts. The plane was turning toward the eastern section of Yenan where the military headquarters are located and important officials live. A rifleman knee-deep in the grass near me trained his rifle towards it, but the plane was too high to shoot. 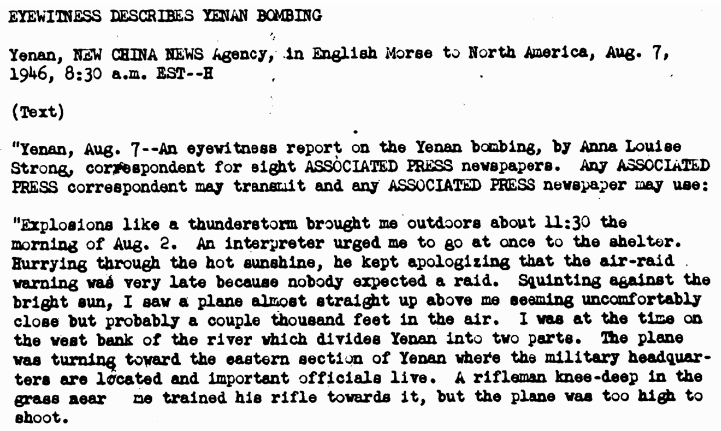 Sharing the communists’ ideology as well as their peril, Strong was far from an impartial, detached observer. Rather, she embraced the Chinese people in their tumultuous quest to build socialism. And they in turn embraced her.

Readex’s new Propaganda and the Chinese Press collection includes Strong’s coverage of Chinese social and political affairs from 1946 until her death in 1970. She worked for a number of news services, wrote dozens of books, and became a formidable global advocate for progressive causes. 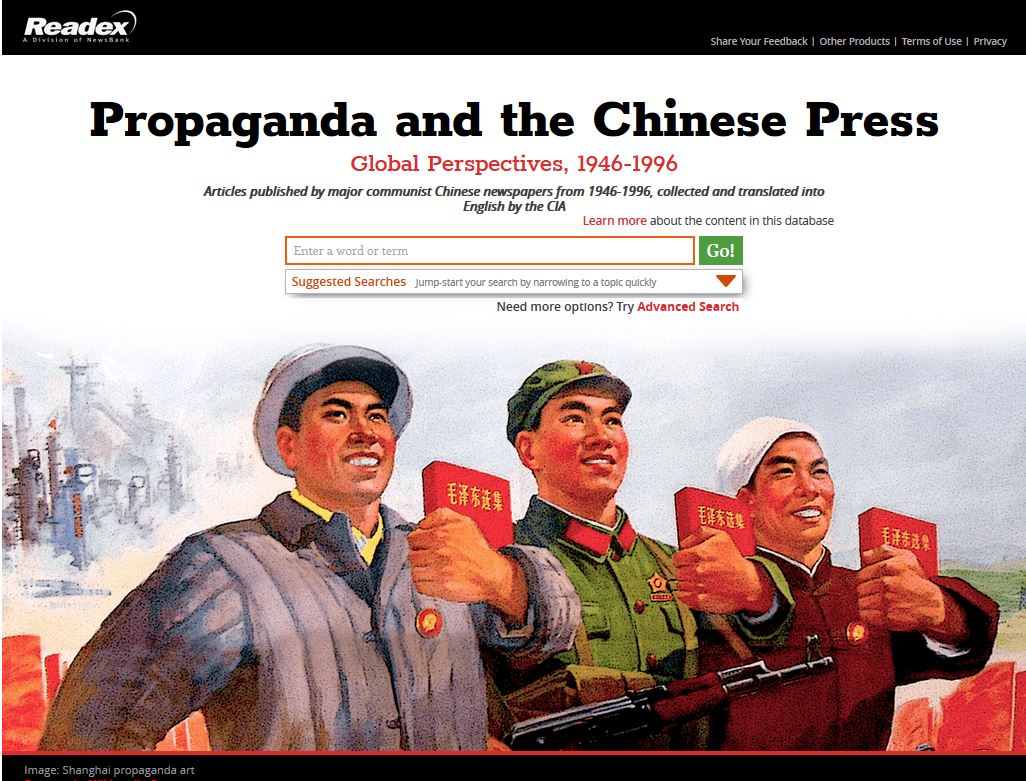 Strong may have been one of the earliest foreign proponents of Chinese socialism, but she was hardly the last. When W.E.B. Du Bois finished his tour of China in 1959, Strong was there to see him off:

Strong was also present to greet the African American civil rights leader Robert F. Williams in 1963 when he sought exile in China following the Freedom Riders’ attempt to integrate busing in Monroe, North Carolina, where Williams headed the local chapter of the National Association for the Advancement of Colored People (NAACP). When he kept a white couple in his home briefly to protect them from mob violence during a demonstration, he was charged with kidnapping and chose to leave the country.

The China Peace Committee gave a banquet here this evening in honor of the American Negro leader, Robert Williams, and his wife. Kuo Mo-jo, chairman of the host committee, and his wife; Vice Chairman Liu Ning-I and Burhan Shahidi, and leading members of various people’s [organizations] were present. Progressive American writer Anna Louise Strong and other American friends in Peking, as well as Sudanese peace champion A.M. Kheir and his wife were present. Kuo Mo-jo and Robert Williams addressed the banquet, in which a friendly and cordial atmosphere prevailed.

When writers in a Soviet political journal attacked Chinese communism (and by extension, Strong herself) in 1963, this was familiar ground; Strong had long since seen the insides of Stalin’s prisons first-hand when she was arrested while working in Moscow in 1949.

An attack on Chairman Mao Tse-tung’s brilliant thesis that the outcome of war is decided by the popular masses, not by atomic weapons, appeared in the WORLD ECONOMY AND INTERNATIONAL RELATIONS published at the end of October. This viewpoint, given by the Chinese leader in 1946 in an interview with American journalist Anna Louise Strong, was described in the magazine as an attempt to “simplify matters by counterposing popular masses to weapons,” and to “minimize the role of weapons in modern warfare.” It was “a flagrant betrayal of Marxist-Leninist methodology” and “a practical denial of the significance of the struggle for peace, disarmament, and international detente,” the magazine said.

Those who stayed in China and were sympathetic to socialism were referred to as “foreign friends” or “foreign experts.” In addition to Robert Williams, noted above, there were fellow journalists Agnes Smedley and Edgar Snow, economist Sol Adler, and Sidney Rittenberg, who at one time headed Chinese National Radio.

It’s ironic to find leftist American intellectuals and activists finding fellowship in China during the May Day holiday, a celebration of working class solidarity that originated in Chicago in 1886.

The internationally known American woman writer Anna Louise Strong was in high spirits, as was another American friend, Sidney Rittenberg. When they saw a group of young Chinese Red Guards performing an antirevisionist skit, they joined the young revolutionary fighters in shouting “Down with Soviet revisionism.” Jack Scott, chairman of the Central Committee of the Progressive Workers Movement of Canada, and several other Canadian friends sat on the ground among the people to watch a performance. He said that this was the first time that he had seen a true celebration of May Day.

Strong would not live quite long enough to see U.S. President Richard M. Nixon visit China in 1972. She died in 1970 and was buried in Beijing with high honors.

A ceremony was held here today to pay last respects to noted American progressive writer Anna Louise Strong before her portrait and ashes.

The portrait of Anna Louise Strong was flanked by wreathes presented by our great leader Chairman Mao and his close comrade-in-arms Vice Chairman Lin Pao. The white ribbons on the wreaths bore this message: “To progressive American writer Miss Anna Louise Strong, a friend of the Chinese people.”

For more information about Propaganda and the Chinese Press, please contact Readex Marketing.