The Titanic and Her Passengers: Using America’s Historical Newspapers to Uncover Tales of Tragedy and Love

Thousands of ships over centuries have lined the ocean floor, but even 100 years after it sank, the Titanic still fascinates. James Cameron’s 1997 critically acclaimed "Titanic"—the second bestselling film in U.S. history—was re-released this month in 3-D. The Titanic has also been the subject of several TV documentaries retelling and exploring the disaster. In its own time, no news event was more covered in exacting detail through the pages of the press. News of the Titanic’s shocking demise made front pages across the nation. 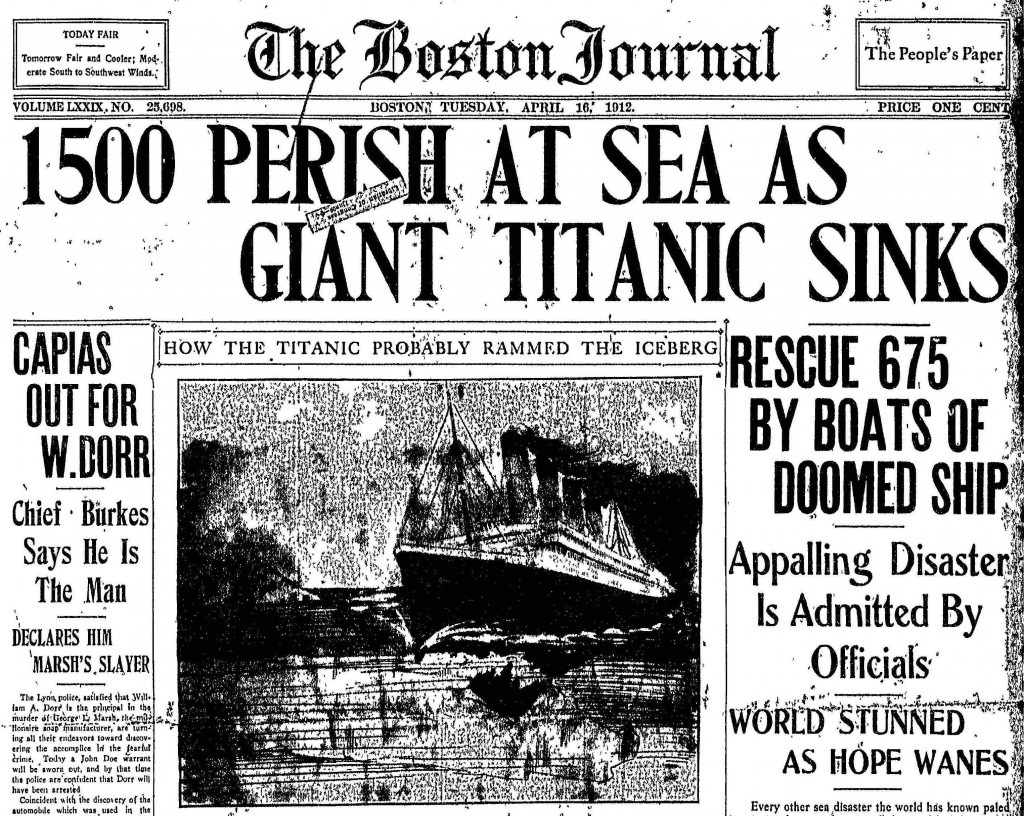 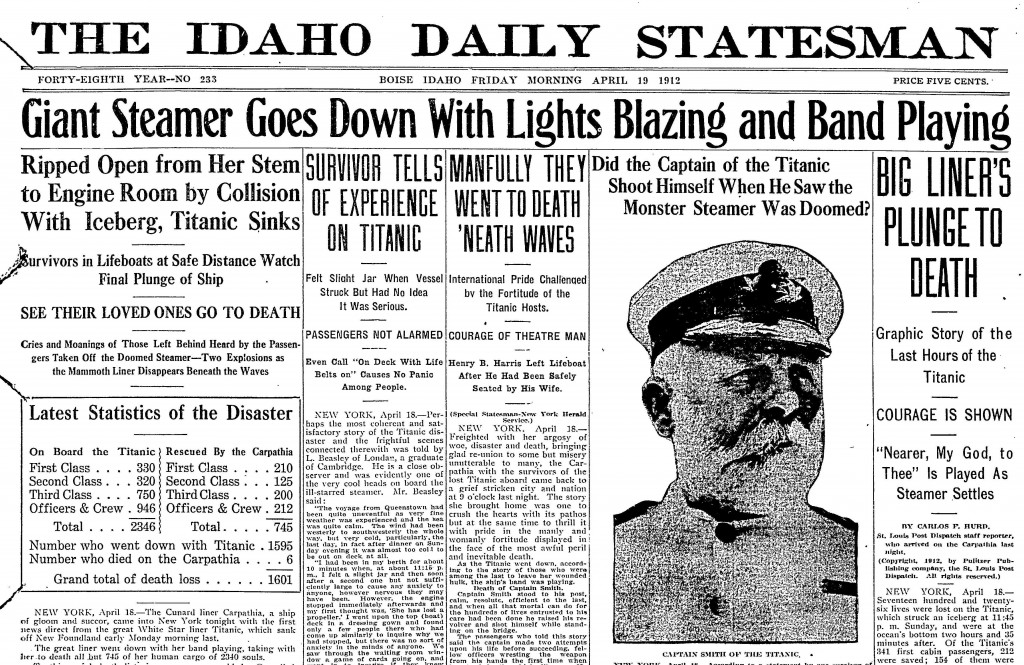 The Titanic was the largest, most luxurious steamer ever built. She had opulent state rooms, expansive dining rooms, elegant smoking rooms, and a grand staircase. She even had elevators, libraries, a gymnasium, a squash court and a full orchestra. The Titanic was at the leading edge of engineering. Her builders assured that she was absolutely unsinkable, and her maiden voyage was to celebrate the triumph of technology over nature. In its April 30, 1912 issue, the Kalamazoo Gazette covered the features of the doomed ship extensively: 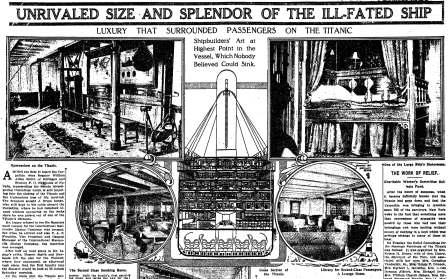 Nineteen-year-old Miss Helen Monypeny Newsom from Columbus, Ohio had been taken on the cruise as part of a European “Grand Tour” designed to separate her from a suitor her parents disapproved of.  He was Karl Behr, a champion tennis player. At 27 years old, Behr was much older than Helen, already somewhat of a notorious celebrity, and therefore not deemed a good match for the young wealthy heiress. But Behr had boarded the ship in secret after feigning a business trip to Paris. The pair met up again on the Titanic’s maiden voyage to New York, where they continued their courtship.

However, unlike the doomed couple in Cameron’s movie, this pair of lovers had a happy ending. Both Helen and Karl ended up in Lifeboat 5 together, supposedly after Helen pleaded for his presence. Some newspapers later reported that Behr had proposed to Helen in the lifeboat. After narrowly escaping death, Helen’s parents apparently reversed their decision and gave approval for the couple to marry.

The tale of the couple’s courtship and survival was covered extensively in the newspapers. As one of the few happy endings of the tragedy, the couple’s wedding was also celebrated widely. 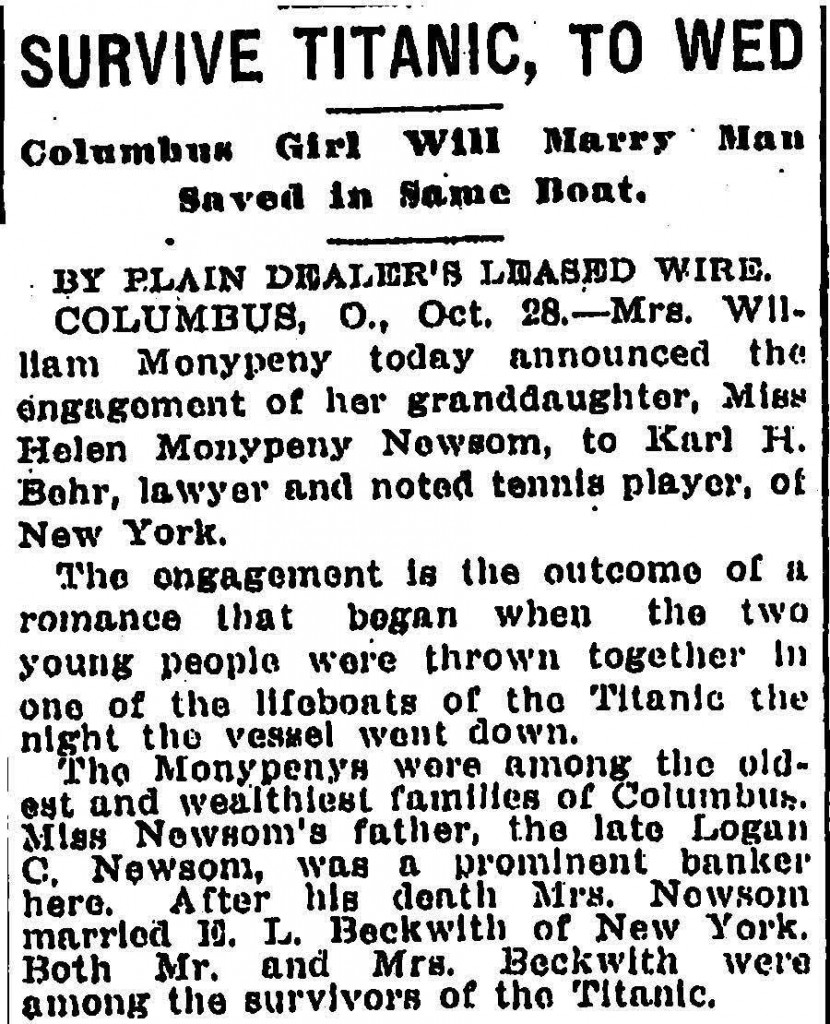 It is the tales of those aboard her—upper class, lower class, survivors and non-survivors—that make the story of the Titanic so compelling. To explore the extensive and often heart-rending coverage of the Titanic and her passengers in America’s Historical Newspapers, simply search “Titanic” in the headline field.