Un-Compromising: Sovereignty and Slavery Sow the Seeds of Rebellion in 1850s Kansas

If the present state of political discourse calls to mind the analogy of blood sport, spare a thought for “Bleeding Kansas,” that period from 1854-1861 when pro- and anti-slavery forces faced off in a violent prelude to the U.S. Civil War.

In Readex’s digital edition of the Territorial Papers of the United States, 1764-1953, the politics of division becomes personal through handwritten accounts such as the following letter from Kansas Deputy Marshal William J. Preston to Governor John W. Geary, written on October 12, 1856. Preston described a party of approximately 240 “immigrants” who were stopped by federal troops near the Kansas-Nebraska border:

There was nothing in the appearance of this party indicating that they were peaceable immigrants. They had no stock of any kind, except those of draught. There were only seven families among them, with no visible furniture, agricultural implements, or mechanical tools, but on the contrary, they were amply supplied with all the requisite articles for camping and campaigning purposes. These were seen protruding from their vehicles. 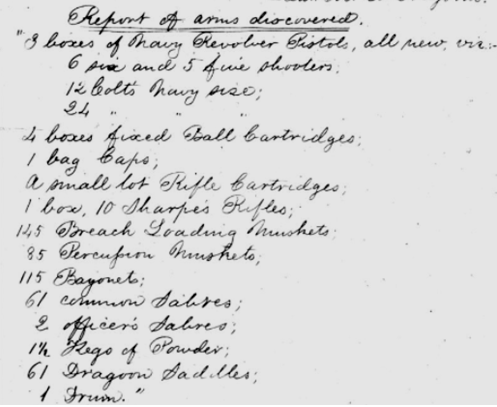 The cause of such subversion was the collision of slavery with sovereignty. In brief, the Missouri Compromise of 1820 admitted Missouri as a slave state offset by Maine’s admission as a free state. It also prohibited slavery north of 36˚30’ (the southern boundary of Missouri). But the Compromise of 1850 included provisions granting popular sovereignty to Utah Territory and New Mexico Territory over the question of slavery—essentially endorsing the “states’ rights” position against federal authority. This was a tacit abrogation of the Missouri Compromise. 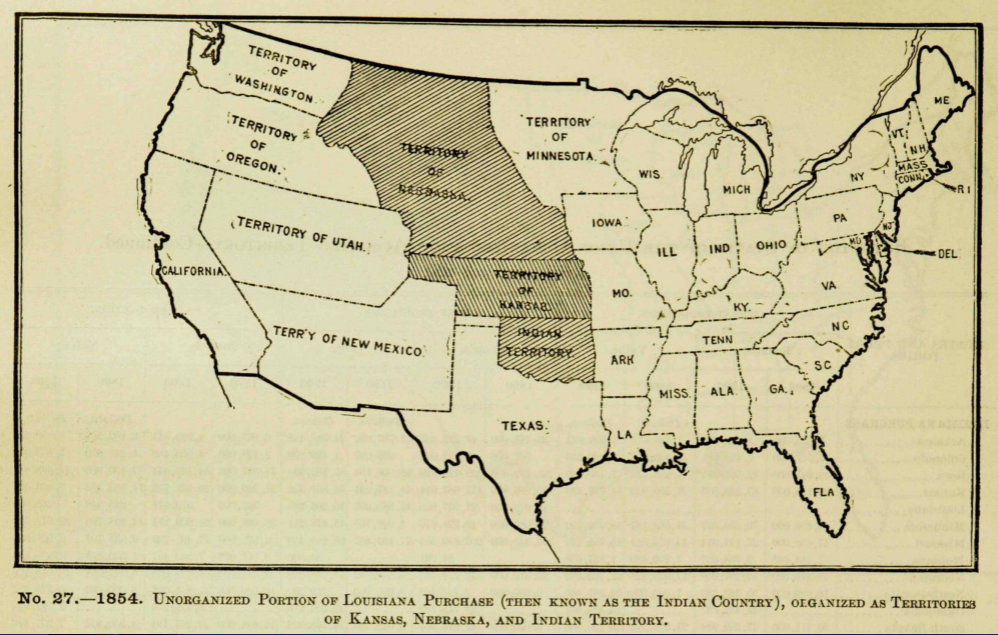 When Kansas and Nebraska were likewise granted popular sovereignty during their admission as territories in 1854, Kansas became the setting for a proxy fight over slavery, fueled by adherents of each position who emigrated to Kansas en masse for the express purpose of swinging the vote in favor of their respective partisans. Political violence between the pro-slavery “Border Ruffians” and abolitionist “Free-Staters” was the certain result.

“Bleeding Kansas” was not simply a metaphor, but an accurate description of facts on the ground. Here’s a dispatch from newly-appointed Governor Geary to U.S. Secretary of State William L. Marcy, written at Fort Leavenworth on September 9, 1856:

In isolated or country places, no man’s life is safe. The roads are filled with armed robbers, and murders for mere plunder, are of daily occurrence. Almost every farm house is deserted, and no traveller [sic] has the temerity to venture upon the highways without an escort.

In Washington, President Franklin Pierce supported Democratic Senator Stephen A. Douglas, who sought to balance railroad interests with the desires of white settlers caught up in Manifest Destiny. To Douglas, the arrival of popular sovereignty in Kansas and Nebraska at the expense of the already-vitiated Missouri Compromise was an acceptable trade-off.

Governor Geary had his hands full quelling a civil war within the contentious microcosm of Kansas Territory. In the passage below, the 101 captured men were campaigning on behalf of Free-State interests, whereas the self-styled militia marching on Lawrence, Kansas, in fact consisted primarily of “Border Ruffians” from slaveholding Missouri. Backed by federal troops under Colonel Cooke, Governor Geary would convince the members of this “militia” to disband and return to their homes.

When within about four miles of Hickory Point, Captain Wood discovered a large encampment upon the prairie, near the road leading to Lawrence. It was the main body of [James A.] Harvey’s men, then under the command of a man named Bickerton, Harvey having left after the attack on Hickory Point. This party was surprised and captured.

Whilst engaged in making preparations for the foregoing expedition, several messengers reached me from Lawrence announcing that a powerful army was marching upon that place, it being the main body of the militia called into service by the proclamation of Secretary [Daniel] Woodson, when Acting Governor [of Kansas Terr.]. This information was measurably confirmed by the accompanying dispatches from General Heiskell, which had reached me within an hour or two of each other. 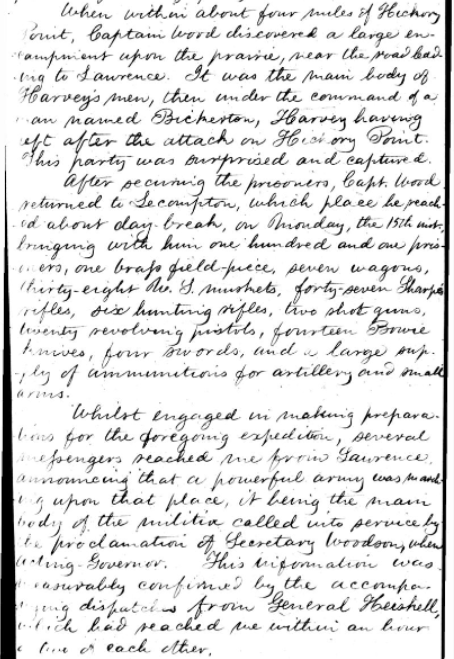 After Governor Geary asserted his executive authority and either captured or discouraged the various competing parties from disrupting Kansas politics, the violence gradually subsided. The people of Kansas Territory would go on to propose four different state constitutions before arriving at the document which was approved in a referendum in 1859. Kansas would become a free state in 1861.

For more information about Territorial Papers of the United States, including pricing for your institution, please contact Readex Marketing.