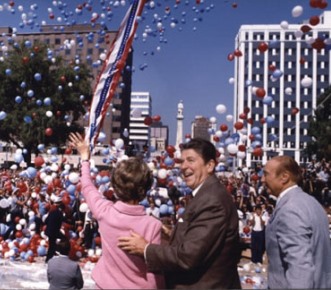 Every U.S. presidential election attracts worldwide interest, and Reports from the Foreign Broadcast Information Service—available from Readex in a unique digital edition—provide English-language analysis of them from all sides of the political and geographical world.

These open-source intelligence reports can be used to understand how different nations viewed the outcome of the 1980 contest between Jimmy Carter and Ronald Reagan. Some of their conclusions are somewhat surprising, especially in light of what actually happened during the eight years Reagan was president.

The first excerpt below was broadcast in Persian from the Tehran Domestic Service on November 6, 1980. The transcript states at the beginning that this is “Unattributed political commentary.” Its headline is “Carter, Reagan Called Identical.” Some of the language in the opening paragraphs could have seemingly come from an Eastern European or Soviet source. 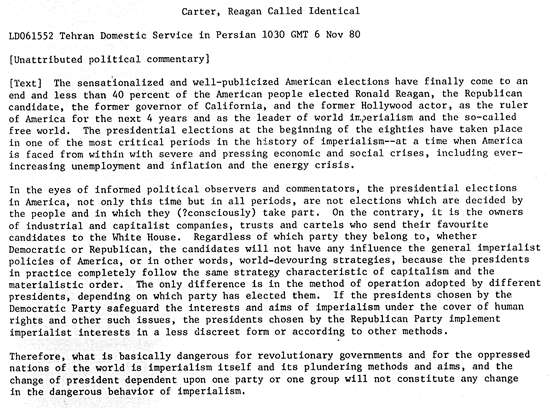 The sensationalized and well-publicized American elections have finally come to an end and less than 40 percent of the American people elected Ronald Reagan, the Republican candidate, the former governor of California, and the former Hollywood actor, as the ruler of America for the next 4 years and as the leader of world imperialism and the so-called free world. The presidential elections at the beginnings of the eighties have taken place in one of the most critical periods in the history of imperialism—at a time when America is faced from within with severe and pressing economic and social crises, including ever-increasing unemployment and inflation and the energy crisis.

In the eyes of informed political observers and commentators, the presidential elections in America, not only this time but in all periods, are not elections which are decided by the people and in which they (?consciously) take part. On the contrary, it is the owners of industrial and capitalist companies, trusts and cartels who send their favourite candidates to the White House. Regardless of which party they belong to, whether Democratic or Republican, the candidates will not have any influence [on] the general imperialist policies of America, or in other words, world-devouring strategies, because the presidents in practice completely follow the same strategy characteristic of capitalism and the materialistic order. The only difference is in the method of operation adopted by different presidents, depending on which party has elected them. If the presidents chosen by the Democratic Party safeguard the interests and aims of imperialism under the cover of human rights and other such issues, the presidents chosen by the Republican Party implement imperialist interests in a less discreet form or according to other methods.

Therefore, what is basically dangerous for revolutionary governments and for the oppressed nations of the world is imperialism itself and its plundering methods and aims, and the change of president dependent upon one party or group will not constitute any change in the dangerous behavior of imperialism.

With the election of Ronald Reagan, who will effectively take over American affairs in 2 months time, the only things which have changed are the occupants of the White House…

At this particular juncture it is clear to the masses of the world, especially the Muslims who with their attitude and due to their revolutions have created terror and fear in the heart of imperialism, Zionism and international communism, that the enemy, regardless of its garb and regardless of its political and diplomatic appearance, is still the enemy. What is important is that the struggle against the enemy should become more consolidated and more organized and that no attention should be paid to the way in which the different agents of the enemy enter the battlefield…

On the other hand, the results of the American elections once again demonstrate the cultural-political weakness resulting from the imposition of mass media and the adherence of the American people to the thesis of separation between the people and the government. The election of Reagan showed how (?5 million) united American Jews decided the outcome of the future leadership of 250 million people. In other words, it was international Zionism which won in these elections….

In the words of Brother Raja’i, the prime minister, Reagan and Carter are the same in our eyes and both are world devourers.

This second excerpt comes from a West German newspaper, the Frankfurter Rundschau of November 6, 1980. The editorial by Werner Holzer is entitled “Hope for Yesterday.”

Their new president is a man who represents the longing of a nation for yesterday, for the good old days, a man who represents the very meaning of the word. Ronald Reagan, with his almost 70 years may be somewhat old for his new task, he may have dyed his hair to appear younger—all this did not matter very much, because Reagan represents a picture of America most of his compatriots like best anyway.

He is optimistic (almost high spirited), he speaks like a man who was always convinced that the strong must not necessarily be alone, but that he can go his way toward success alone if need be. Ronald Reagan never gives the impression of being undecided and discouraged, even if he is. He simply faces the people saying: I have no fears about the future, and I do not believe that the American people are afraid of the future…

The new man says he is not afraid of the future, and one must envy him for that. Maybe he is underrating all the contradictory expectations he will have to cope with: Hopes of Latin American military dictatorships and the expectations of their democratic opponents, hopes of Israel for a pro-Israeli Reagan and contrary expectations of the Arabs and Palestinians, hopes of the European for a more predictable and determined U.S. president together with the expectation that he will listen more to his allies.

That is quite a lot all at once. But the sad thing about America’s hope for the orderly world of yesterday is the fact that the trend is in the other direction, to an unknown territory where one cannot get along only with old Boy Scout virtues and tricks.

Reagan has one thing in common with his predecessors: America expects him to do almost the impossible. If he succeeds in implementing just a bit of these expectations, that will already be quite a lot. He will experience, like Carter, that his room for maneuver in domestic and international policies is smaller than he may have hoped.

This final excerpt was broadcast in Russian on the Moscow Domestic Service on November 5, 1980 and is entitled “Druzhinin Explains Vote.” 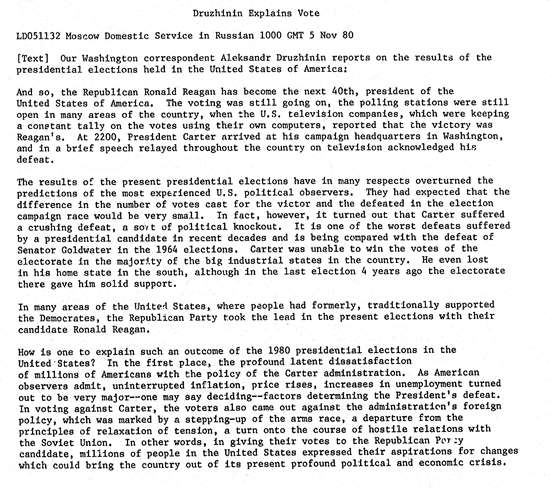 Our Washington correspondent Aleksandr Druzhinin reports on the results of the presidential elections held in the United States of America:

And so, the Republican Ronald Reagan has become the next 40th, president of the United States of America. The voting was still going on, the polling stations were still open in many areas of the country, when the U.S. television companies, which were keeping a constant tally on the votes using their own computers, reported that the victory was Reagan’s. At 2200, President Carter arrived at his campaign headquarters in Washington, and in a brief speech relayed throughout the country on television acknowledged his defeat…

In many areas of the United States, where people had formerly, traditionally supported the Democrats, the Republican Party took the lead in the present elections with their candidate Ronald Reagan.

How is one to explain such an outcome of the 1980 presidential elections in the United States? In the first place, the profound latent dissatisfaction of millions of Americans with the policy of the Carter administration. As American observers admit, uninterrupted inflation, price rises, increases in unemployment turned out to be very major—one may say deciding—factors determining the President’s defeat. In voting against Carter, the voters also came out against the administration’s foreign policy, which was marked by a stepping-up of the arms race, a departure from the principles of relaxation of tension, a turn onto the course of hostile relations with the Soviet Union. In other words, in giving their votes to the Republican Party candidate, millions of people in the United States expressed their aspirations for changes which could bring the country out of its present profound political and economic crisis.

It would be interesting if these three authors revisited their conclusions after Reagan’s time in office.