An early mention of Valentine’s Day in an American newspaper comes from the Farmers' Register (Lansingburgh, NY). This article, reprinted from an unnamed British paper, notes the increase in Valentine’s Day letters passing through the London post office from 60,000 in 1804 to 80,000 in 1805. Clearly, the practice of sending notes to a lover was growing noticeably. 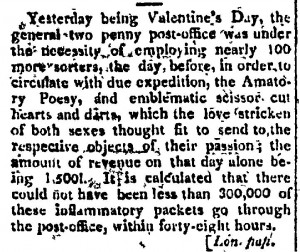 In May 1811, the Connecticut Herald (Hartford, CT) quoted a London paper reporting “the love stricken of both sexes thought fit to send to the respective objects of their passion…” not “less than 300,000 of these inflammatory packets…through the post office, within forty-eight hours.” Jumping ahead to February 1844, the Boston Evening Transcript printed a document from the New York Post Office indicating “that the Postmaster of Great Gotham does not intend to be beaten in his arrangements for distributing the missives suggested by the anniversary of St. Valentine, whatever may have been his ill fortune with the foreign mails.”

Numerous 19th-century newspapers published articles on the origins during Roman times of St. Valentine’s Day. Some stated that memory of the good Saint himself was evoked by the frippery of love poems and lacy cards. This example from The Northern Whig (Hudson, NY) reveals the writer’s attitude towards those he apparently considers beneath him. 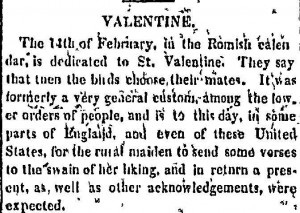 Though expressions of sentiment may change over the years, retailers are steadfast in reaping profits from the holiday. The following interview was published in a February 1879 issue of the New York Herald: 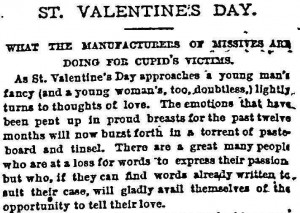 How many valentines have you made this year?” inquired a HERALD representative of a well known manufacturer on Nassau street. “Between six and eight million, including comics,” was the reply. “You must be getting up a corner in love” said the reporter. “Oh, no, we don’t want to monopolize Cupid, but we should like to sell valentines to all who have been pierced by his remorseless arrow.” “How is the valentine business this year compared to others?” inquired the reporter. “It never was better.”

Today a young man with love in his heart might be more likely to tweet the object of his affection than to buy a paper Valentine. Urged by romantic TV ads, the more financially able lover might venture to the nearest mall for a “chocolate diamond” necklace or an electronic do-dad to express his or her feelings. Whatever method one might choose to convey romantic sentiments, whatever the century, February 14 appears to remain a day with high expectations to do it.