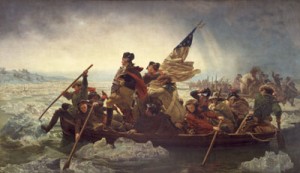 No Christmas celebration would be complete without Santa Claus, carols and George Washington. Wait, George Washington? What does he have to do with Christmas, you might ask? Well, quite a bit if you live near the site where General George Washington and his soldiers crossed the Delaware River on Christmas night in 1776. Each year at Pennsylvania’s Washington Crossing Historic Park, a group of dedicated Revolutionary War re-enactors and history enthusiasts gather to recreate Washington’s famous Christmas-night river crossing. The participants brave the cold dressed in authentic reproduction clothing and use replicas of the same kind of boats Washington and his men would have used. This year will mark the 234th anniversary of their daring crossing and pivotal victory the next day at the Battle of Trenton. 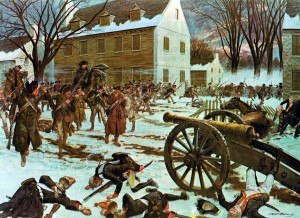 By the end of 1776, the war for independence was going poorly for the Americans. They had suffered defeat by the British at the Battle of Brooklyn (also known as the Battle of Long Island) and at White Plains, New York. General Washington lost New York City as well as Forts Lee and Washington. The Continental Congress, in fear of a British attack, had abandoned Philadelphia. Morale in the American army was low and soldiers were deserting at an alarmingly high rate. It was truly a time, in the words of Thomas Paine, to "try men's souls." 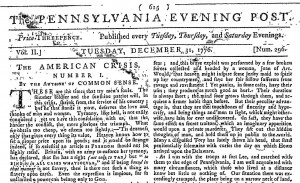 Despite the fact that the Continental Congress had officially declared independence from Great Britain only a few months before, Washington knew that late 1776 was a critical time for the American army and the fight for freedom. Winter was fast approaching, and his army was suffering from a lack of warm clothing and other vital supplies. Soldiers were deserting, and enlistments for many men were due to expire with the New Year. Washington desperately needed a victory, and soon—as seen in this “Extract from a letter at Newark,” which appeared in the November 30, 1776 issue of the Pennsylvania Ledger:

“I hope these losses, will rouse the virtue of America; if she does not exert herself now, she does not deserve the independence she has declared. I have still hopes of success – I heard a great man say many months ago, that American would not purchase her freedom at so cheap a rate as was imagined – nor is it proper she should, what costs us a little, we do not value enough.” 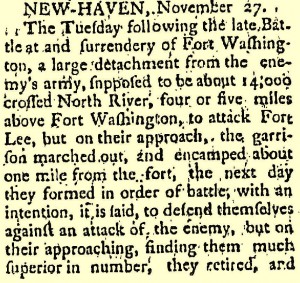 Washington had moved his army across the Delaware River to Pennsylvania after the Americans abandoned Fort Lee in New Jersey on November 20. In an effort to turn the tide of the war, Washington devised a plan to re-cross the Delaware and attack the Hessian forces stationed in winter quarters at Trenton, New Jersey. The Hessians were German soldiers, mostly from the principality of Hesse-Kassel, hired as auxiliary troops by the British. Colonel Johann Rall, the Hessian commander, was confident in his ability to hold Trenton and ignored reports of a possible rebel attack. On Christmas Eve Washington assembled his ragged army near McKonkey's Ferry in Pennsylvania, just a few miles north of Trenton on the bank of the Delaware River. The weather was cold and miserable; freezing rain changed to snow. The river was full of ice, making the crossing exceptionally dangerous. 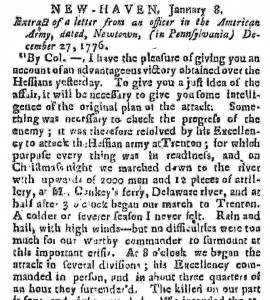 It was three o'clock in the morning on December 26, when the artillery and Washington's force of 2,400 men finally reached the New Jersey shore. Washington divided his men into two columns and began his march to Trenton. Washington and General Nathanael Greene approached the town from the north while General John Sullivan approached from the south. The Americans surprised the Hessian garrison and within an hour the Battle of Trenton was over. The victory boosted American morale and instilled confidence in the colonial troops. A second victory was achieved a few days later on January 3, 1777, when Washington’s army defeated the British at Princeton. These victories encouraged many soldiers to reenlist. The story of Washington’s famous river crossing and the victories at Trenton and Princeton are played out in America’s Historical Newspapers. There are intriguing contemporary articles as well as numerous articles detailing the centennial, bicentennial and modern day reenactments of these events.

If you are in the Pennsylvania area and want to celebrate the holiday in patriotic fashion, visit Washington Crossing Historic Park at 1:00 pm on Christmas Day. Join others in honoring the soldiers of 1776 as the heroic Crossing of the Delaware is reenacted. To request a trial of America's Historical Newspapers, please use this form.