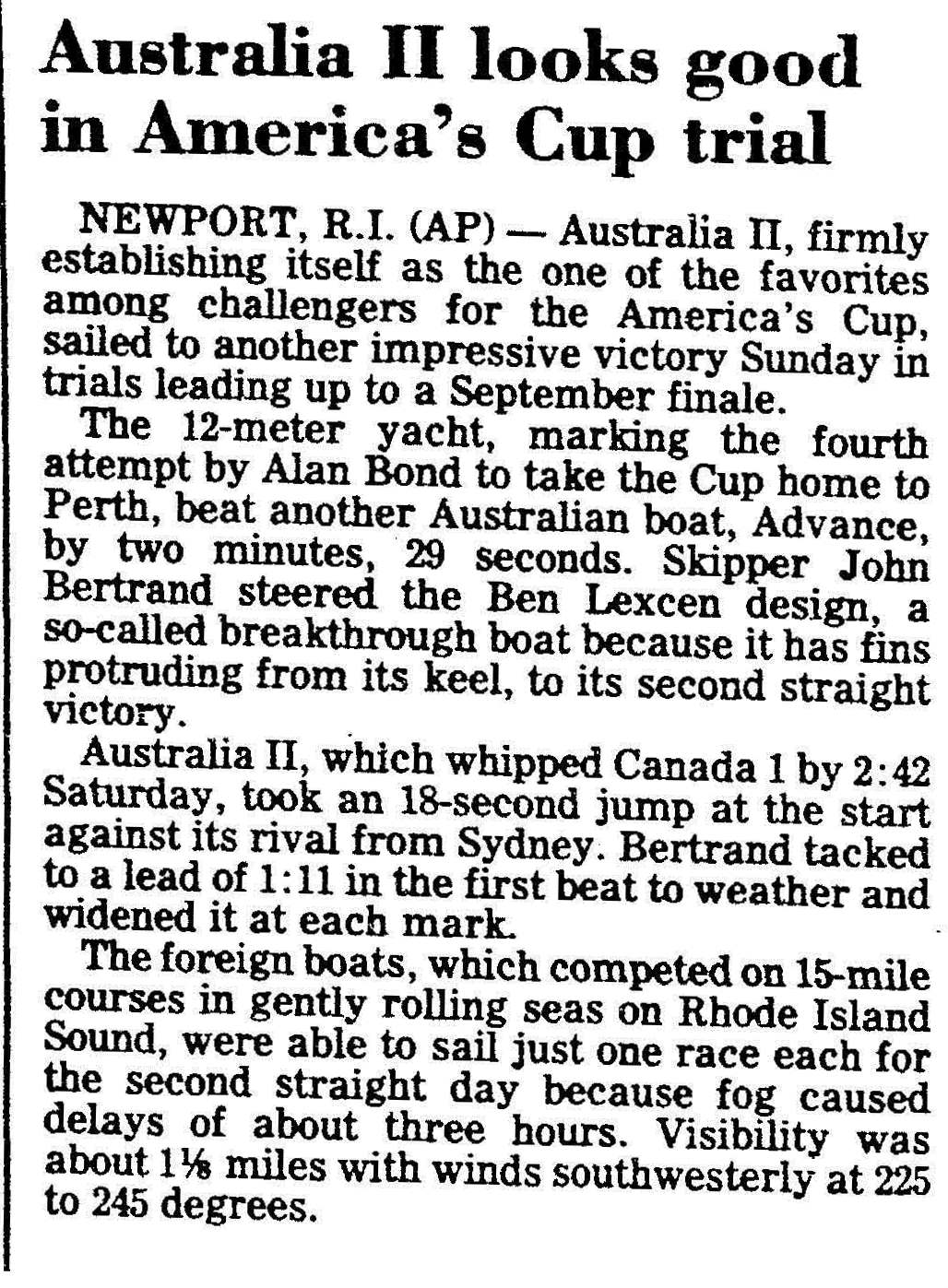 Controversy surrounded Ben Lexcen’s innovative design of the yacht’s famous “winged keel.” It drew increasing attention as Australia II raced with impressive speed, winning 36 out of 40 preliminary races against the other foreign challengers. To ensure the design of the keel was kept a secret and could not be copied – and to play mind games with the Liberty crew – the body of Australia II was covered with canvas sheets and protected by an armed guard while at the dock.

Suspecting an unfair advantage, the New York Yacht Club (NYYC) wrote to the International Yacht Racing Union to question the legality of Australia II’s winged keel and to ask that the entry be disqualified. To the NYYC’s dismay, the international authority unanimously concluded that the design of the keel was legal and Australia II was still eligible to compete. 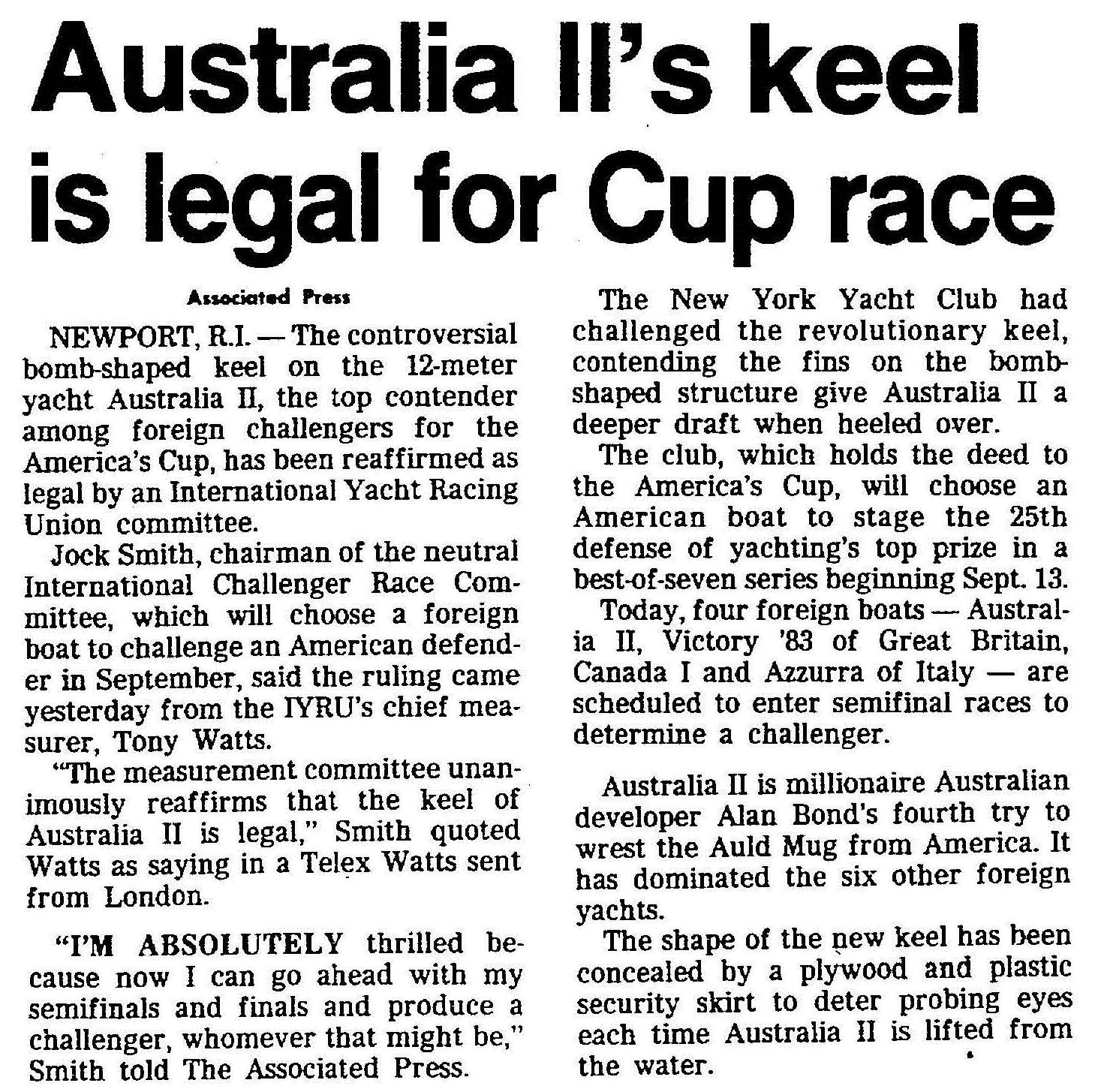 As the controversy escalated, the NYYC continued to seek avenues to question Australia II’s eligibility to race and even tried to purchase the keel design. They were unsuccessful.

As the trials concluded, the NYYC’s Liberty was selected as the American defender and Australia II won its position as the foreign challenger. Fuelling the rivalry between the two crews, the skipper of Liberty Dennis Conner told the media he still doubted the legality of Australia II’s design. Meanwhile, expectations grew that Australia II could become the first foreign entry since 1851 to win the America’s Cup. 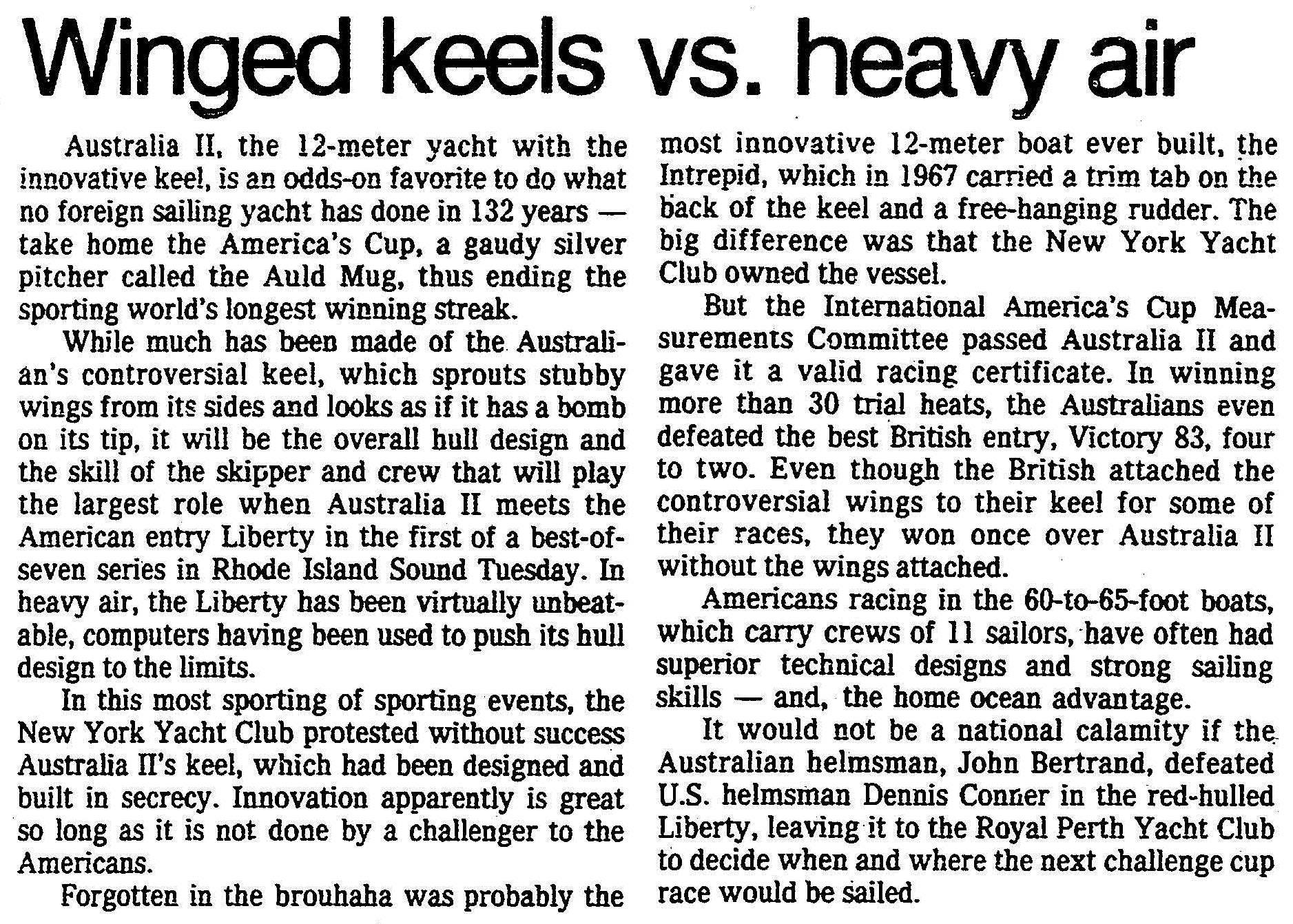 The best-of-seven series of races for the America’s Cup began on September 14, 1983. Liberty won the first two races as Australia II struggled, her mainsail breaking and flapping loose in the wind for the duration of the second race. With Liberty in the lead at 2–0, Australia II’s hopes of victory began to fade. 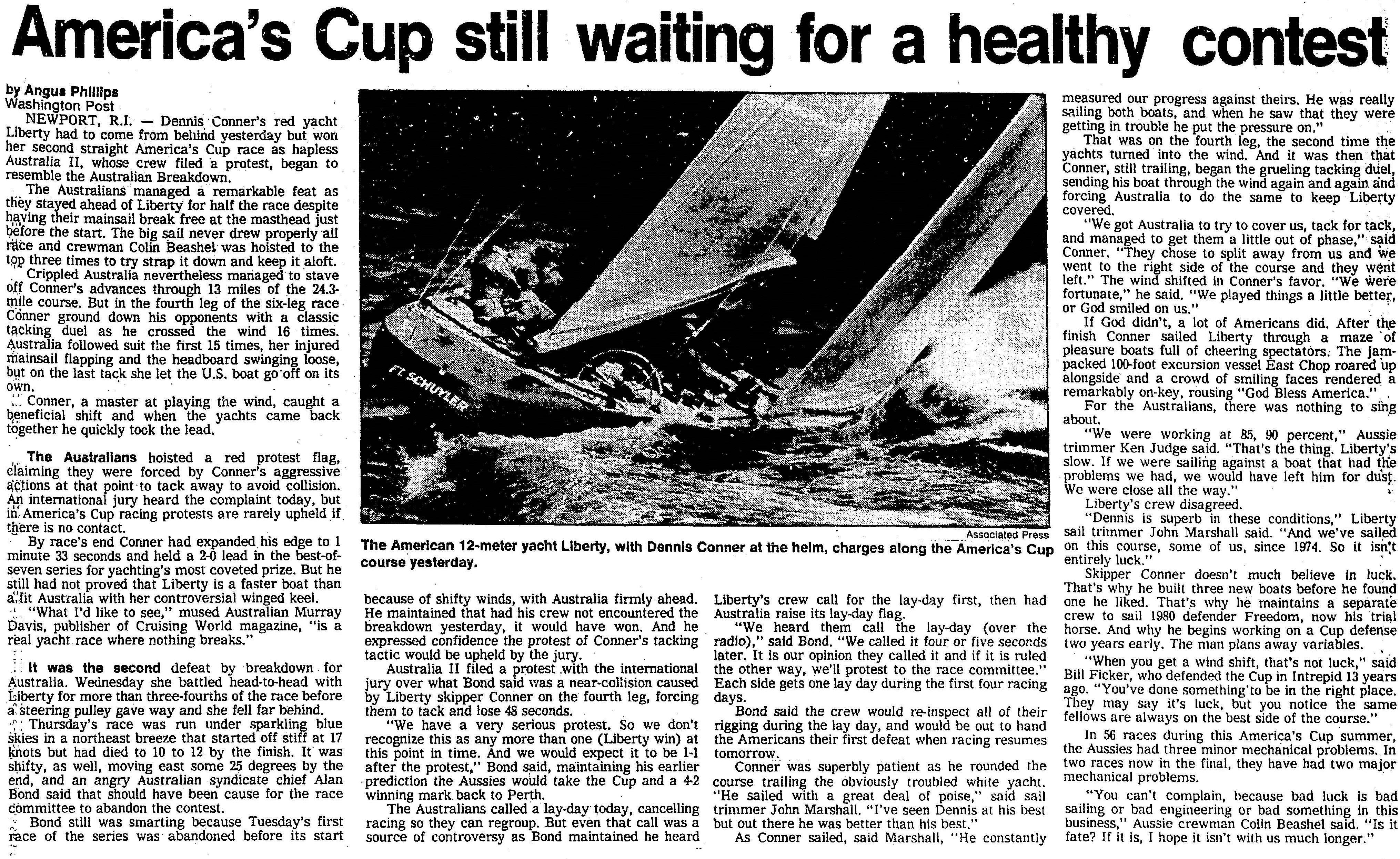 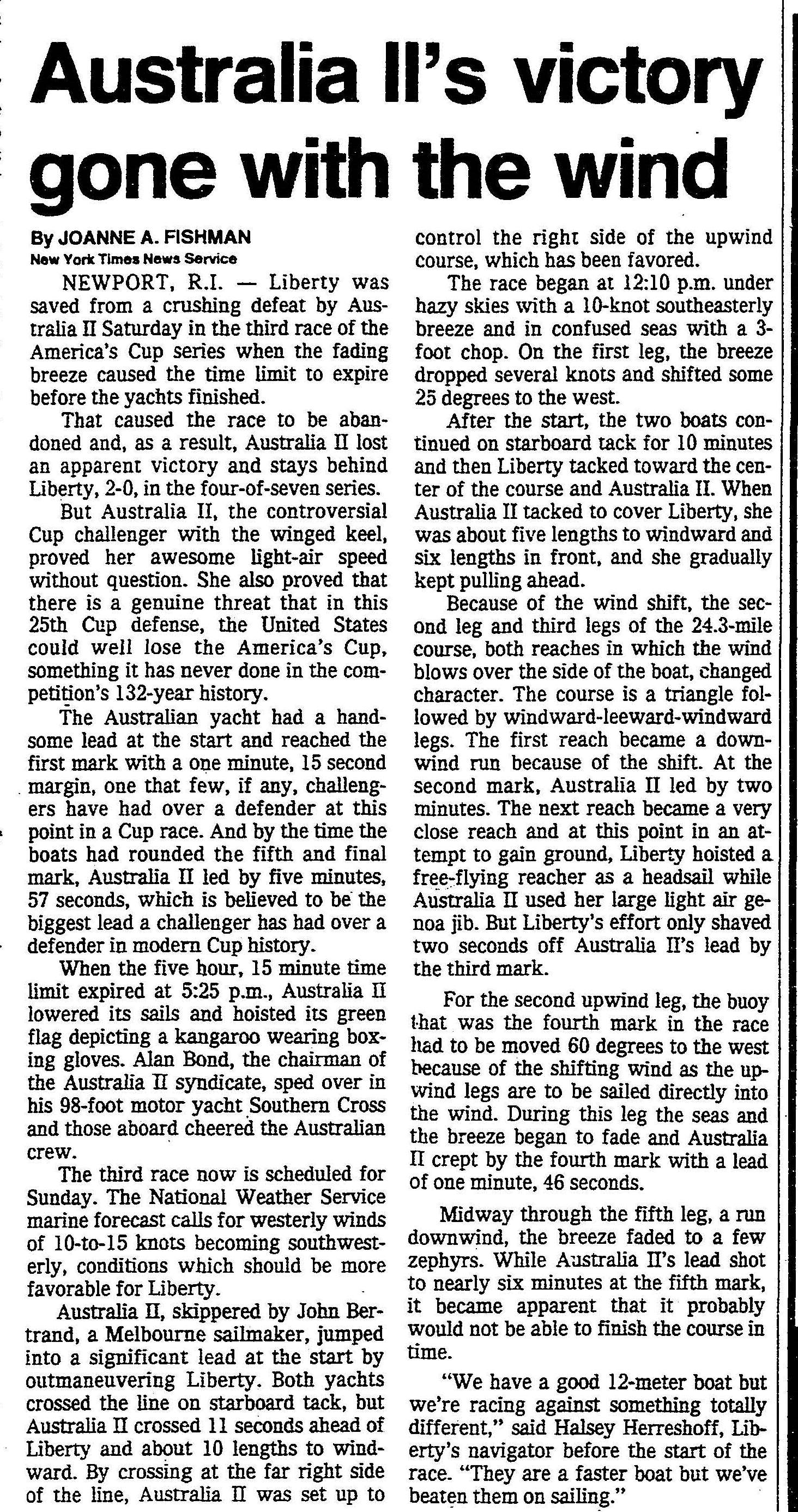 The crew of Australia II were not deterred and began to stage a comeback, winning the third and fifth races, despite choppy seas and windy conditions. After five races, the score was 3-2 in Liberty’s favor, the defender needing only one more win to keep the cup on U.S. soil.

Australia II prevailed to win the sixth race. With the scores level, the seventh and final race would decide the winner. Exasperated, one reporter in The Augusta Chronicle wrote, “Who are these brash, nut-brown sailors from the bottom of the world who dare to seize the lumpy, old silver ewer which has not left the United States in 132 years?”

The crowds gathered at Newport, Rhode Island, in anticipation for the final race. With the rivalry between the two crews at its peak, Liberty sailed from the dock to the tune of the Rocky theme, while Australia II returned fire with Men at Work’s anthem, Land Down Under. Moments before the showdown was to begin, the Americans controversially called for a “lay day,” postponing the race for 24 hours due to light winds. The Australians called the decision a “disgrace” and remarked, “They can’t run forever. They’ve got to face us some day.”

Despite a 57-second lead to Liberty in the final race, Australia II came back strong to win by 41 seconds. The unprecedented victory meant Australia II had become the first challenger to win the America’s Cup since the event began in 1851, ending “the longest winning streak in sports history.” 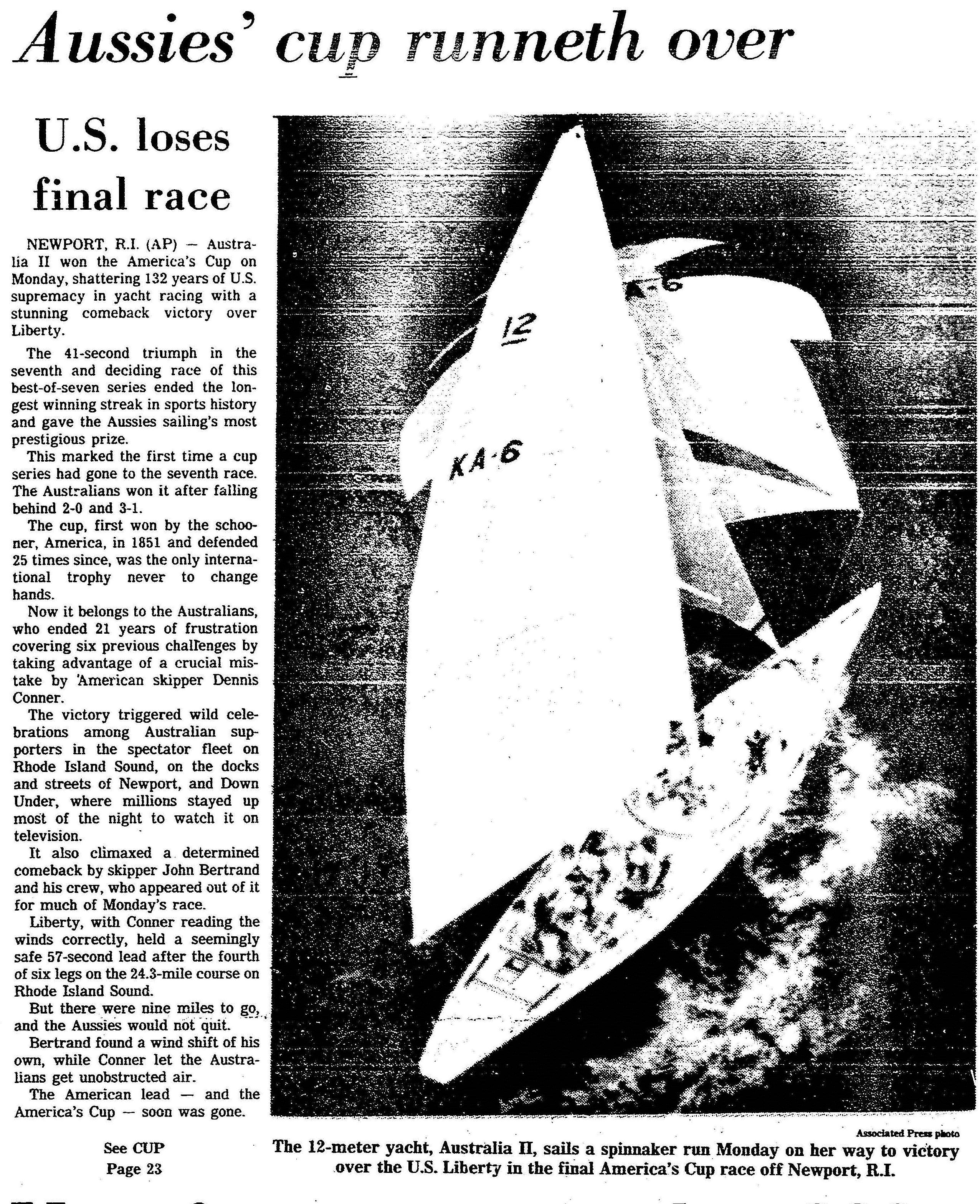 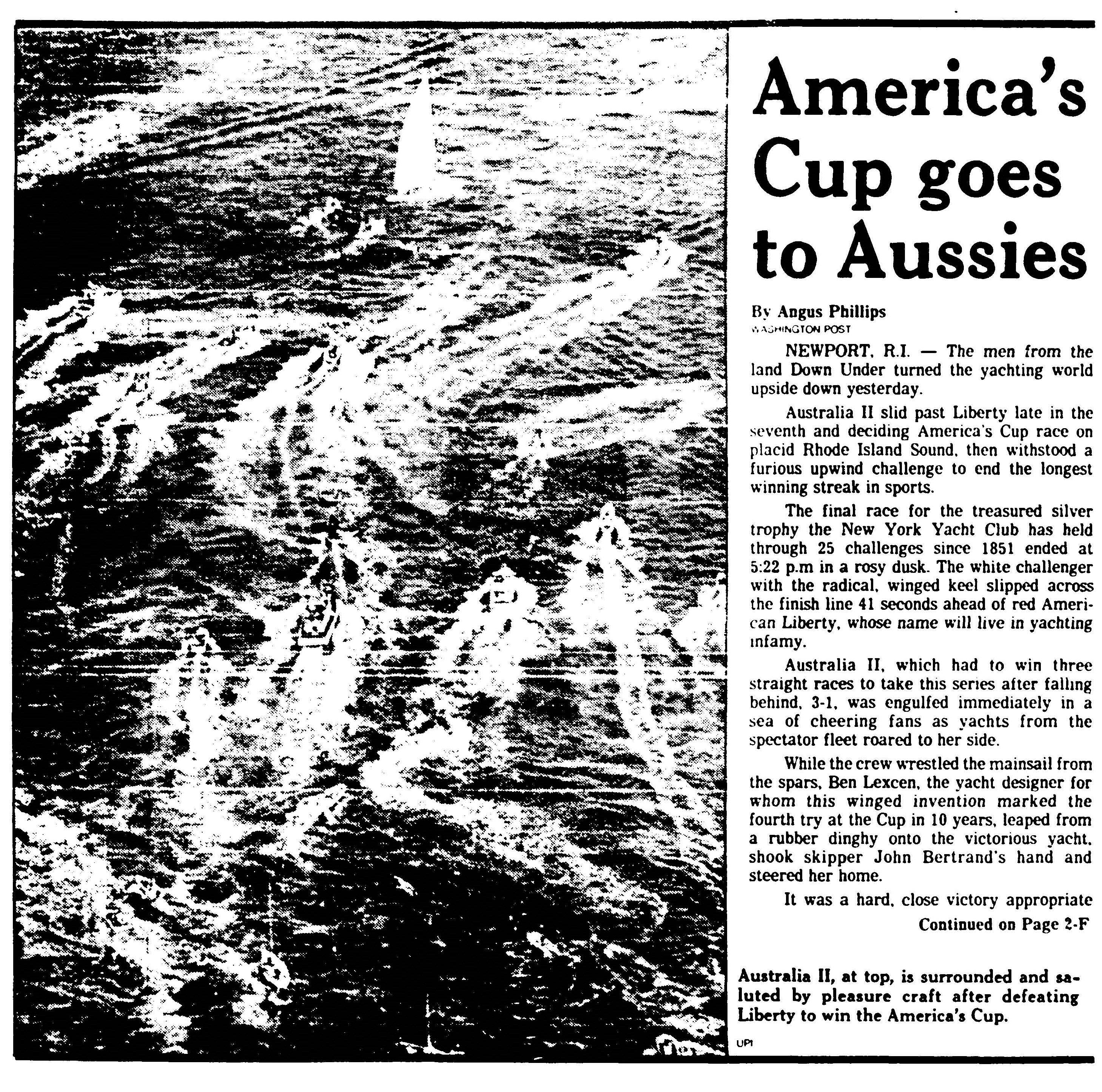 In a ceremony held soon after the race’s end, the victorious moustachioed skipper of Australia II John Bertrand said, “I’m very proud. I feel very humble.” Bertrand raised the coveted trophy alongside Ben Lexcen, the designer of the yacht’s winged keel, and businessman Alan Jones, who had invested $16 million in four attempts to win the America’s Cup. Later, as hundreds gathered at the dock, the Australians finally removed the covers on their beloved yacht to reveal the design of the winning, winged keel to the public. 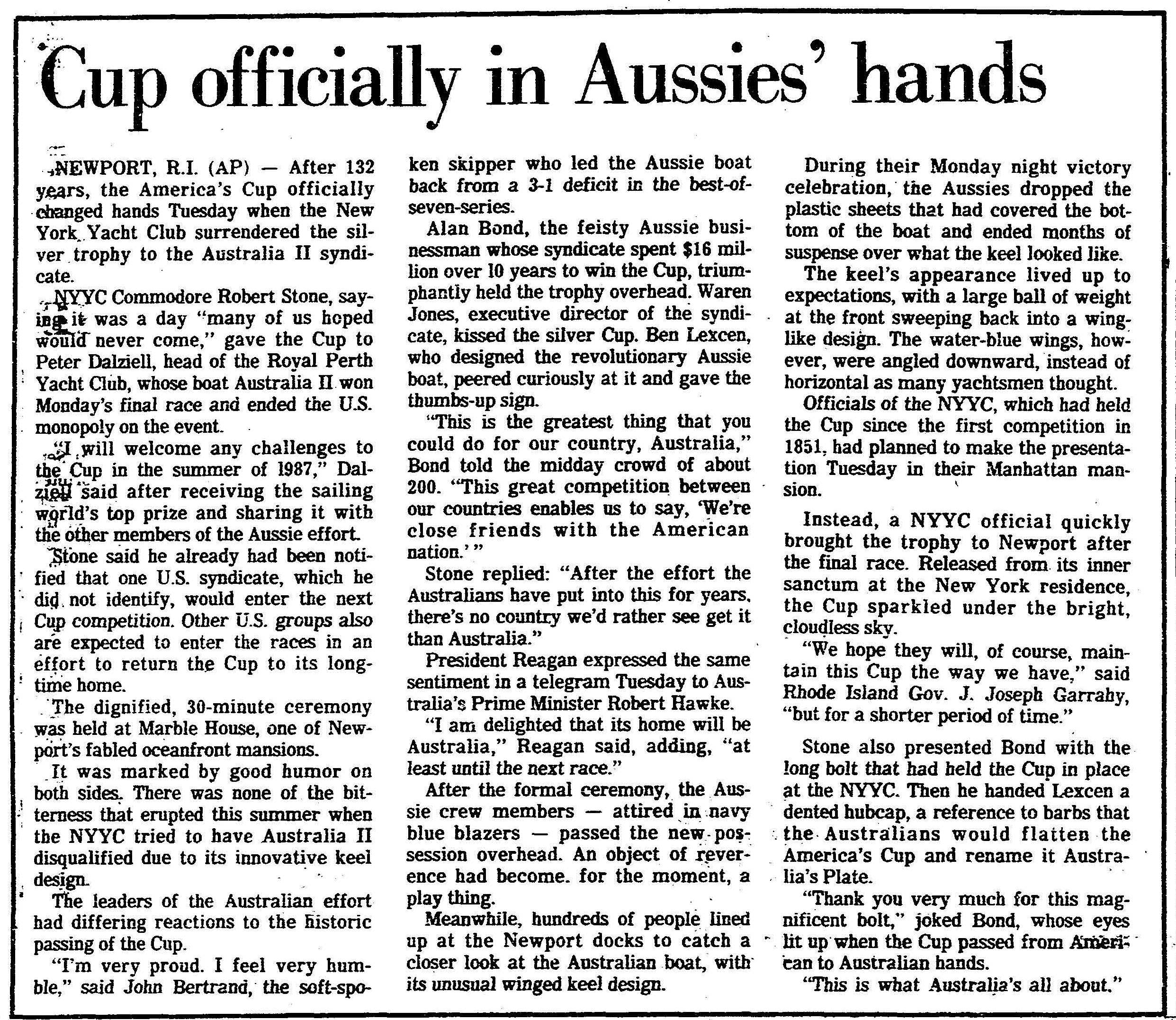 Millions of Aussie revellers had stayed up throughout the night until news of the victory came through at dawn. As the bleary-eyed nation faced the morning, Australian Prime Minister Bob Hawke, drenched in champagne, famously quipped, “Any boss who sacks anyone for not turning up today is a bum.” 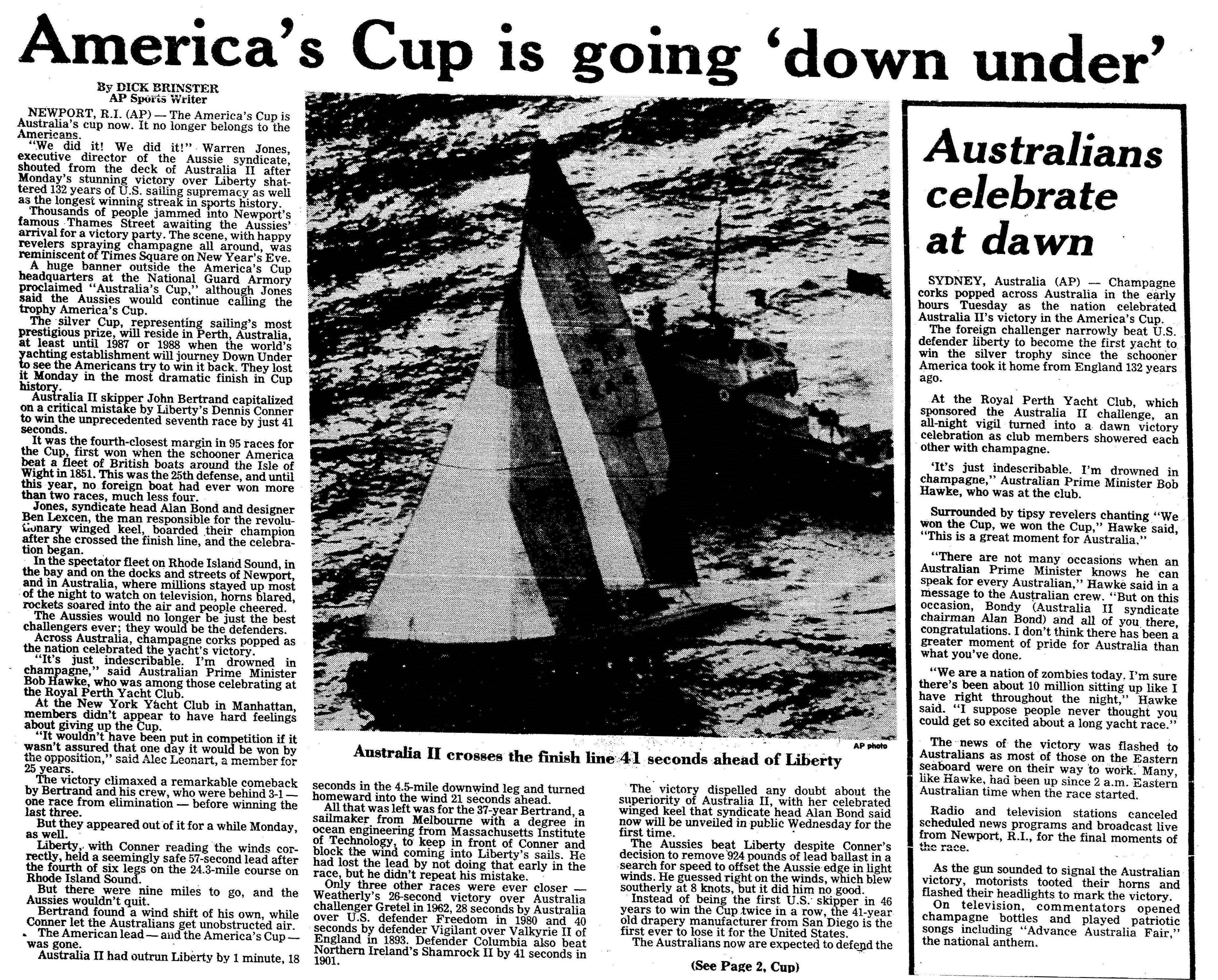 In perhaps a more sober moment, Hawke and President Ronald Reagan exchanged telegrams of thanks and congratulations in a show of friendship between the two nations and in recognition of one of the greatest victories ever in sporting history. 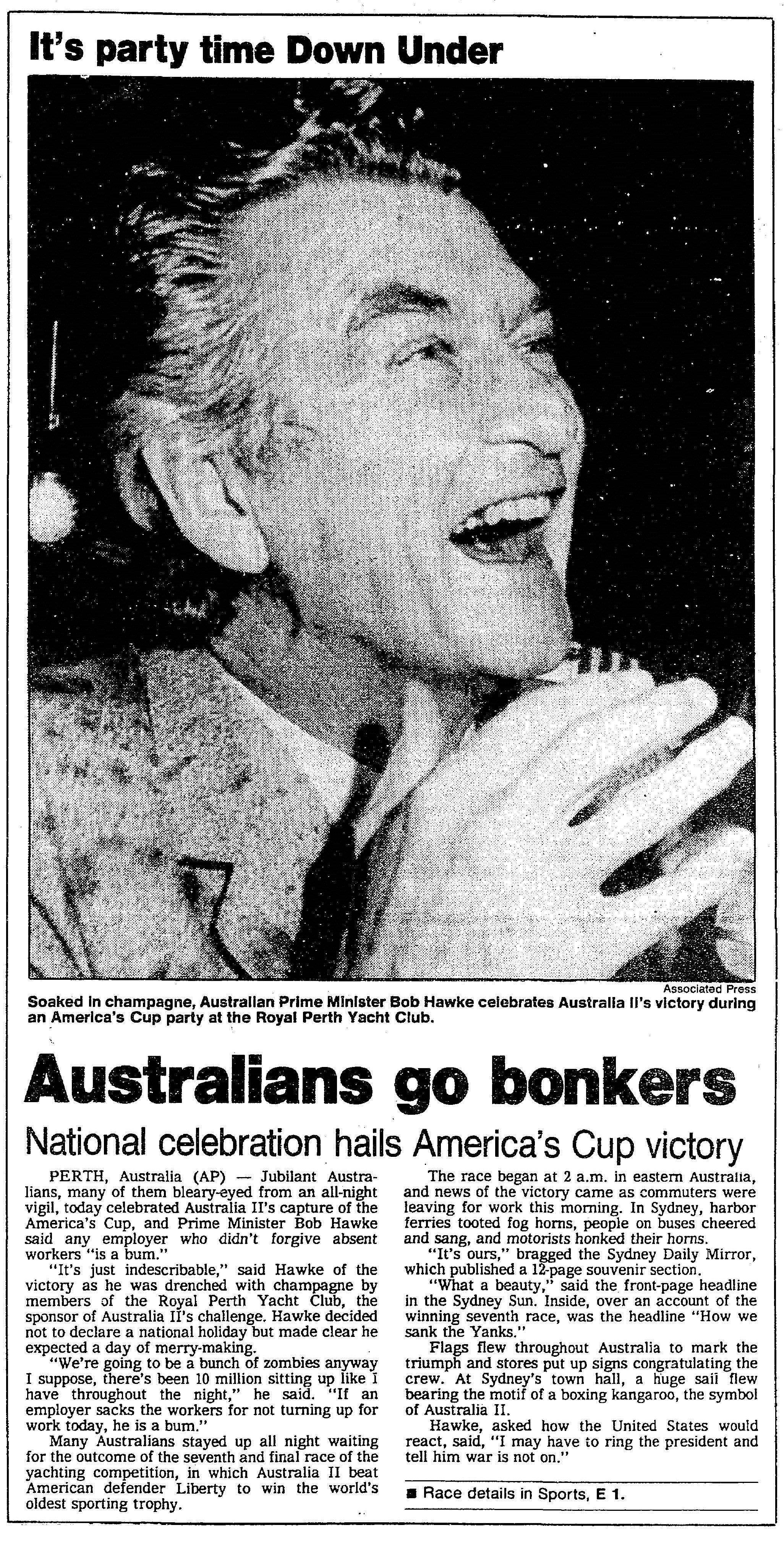