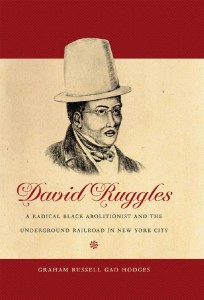 David Ruggles (1810-1849) was a brilliant, intrepid, multi-talented soul who devoted his time and health to “practical abolitionism.” This term, Ruggles argued, meant that abolitionists should not just philosophize about the day when slavery would end, but strive to help the everyday victims of human bondage.  In Ruggles’ home city of New York, such assistance included blocking kidnappers who stole young black children from the streets under the pretense that they were fugitive slaves. It meant providing succor for self-emancipated slaves. Frederick Douglass arrived in New York on September 3, 1838, penniless, lonely, and frightened. He spent a night sleeping among the barrels on the docks of the harbor. A kind sailor took him to Ruggles’ house where he learned about anti-slavery activities, was married to his fiancé, and then was sent off to New Bedford, Massachusetts armed with a five-dollar bill and a letter of recommendation. Such support raised Douglass to become one of America’s greatest leaders; Ruggles’ actions became taproots of the famous Underground Railroad. Ruggles watched New York’s port to see if illegal slave traders dropped anchor; when they did he had the captains arrested and the enslaved freed. Ruggles worked tirelessly as the secretary and public face of the New York Committee of Vigilance, the organization for practical abolitionism. Ruggles was also a fervent writer of pamphlets and letters to radical newspapers, operated a black lending library and anti-slavery bookshop, and edited the nation’s first black magazine, the Mirror of Liberty. After his health broke, he moved in 1841 to Northampton, Massachusetts where he continued his Underground Railroad work, became a hydrotherapist, and opened a hospital to treat patients. After Ruggles’ death in 1849, the famous abolitionist William Lloyd Garrison proclaimed, “his biography has yet to be written.” In 1998, I agreed to write a Ruggles’ biography for the University of North Carolina Press, and in 1999 I received a short-term fellowship at the American Antiquarian Society in Worcester, Massachusetts to research its massive newspaper, book and manuscript holdings. One of the joys of such fellowships is the camaraderie one finds with other scholars working on projects in early American history and literature. Together we labored over ancient newspapers, churned microfilm machines, and pored over tiny scratches of the handwriting of famous and obscure early Americans. At night we talked about our findings and forged lasting friendships.

There was one computer in the house where we lived, but few of us truly understood how to use it. I left Worcester laden with microfilm pages and piles of notes about Ruggles’ articles and letters. I had worked so fast that later I could not always read my own handwriting. Years passed and I became involved in other book projects. Ruggles still awaited his biographer. Fast forward to 2007. My publisher was tiring of my excuses and openly wondering if they would ever get a manuscript from me. Life no longer allowed me to spend weeks in Worcester. My wife, for one, was pregnant with our twin boys and soon they would need most of my time. So travel for research was out. Fortunately I worked at a college that subscribed to the America’s Historical Newspapers database. I could go to the school library, log on to its computers, and punch out fresh copies of all the Ruggles articles that I had labored to uncover over eight years before at the American Antiquarian Society. They numbered over two hundred. Searching under Ruggles’ name, initials, meetings of the New York Committee of Vigilance, and by looking at the careers of his associates, I was able to find far more about him than I had previously. Unforeseen networks emerged.

By connecting names in newspaper articles around New York State and New England with lists of subscribers to his magazine, I discerned lengthy cords of conspirators willing to help fugitive slaves Ruggles sent along. As Readex added new titles and extended the dates of its coverage, I found items that were unimaginable to me. How else would I ever have located an obituary published right after Ruggles’ death in December 1849 in a Milwaukee newspaper? The writer lamented Ruggles’ passing, noting that "he was a warm-hearted, able man, and an untiring friend of his own (the colored) race." Another insight came from discovery of how newspapers across the country reprinted original stories from a single source. I had known about these early wire services before but became fascinated by how reports of Ruggles’ activities were repeated in media chains across the Northeast and Midwest. Some even cropped up in the South. Long before Frederick Douglass had become a household name, readers in Missouri, Louisiana, Georgia, Maryland, Massachusetts, and Maine could follow, applaud, or condemn Ruggles’ exploits. As my personal life became wonderfully complicated with the birth of my sons, my intellectual odyssey into David Ruggles’ life broadened without leaving the library. While such searches can never replace the friendships gained at the American Antiquarian Society and other archives, they offer invaluable assistance to time-pressed authors. Thanks in large part to America’s Historical Newspapers the biography of David Ruggles is now at hand.

[Editor's note: In 2011 Readex will begin releasing African American Periodicals, 1825-1995—the inaugural collection in America's Historical Periodicals, a new Archive of Americana series. That collection will include extremely rare issues of the Mirror of Liberty, published in New York by David Ruggles, as well as more than 150 other African American periodicals.]

About the Author Graham Russell Gao Hodges is the George Dorland Langdon Jr. Professor of History and Africana & Latin American Studies at Colgate University. He is author or editor of more than a dozen books. In March 2010, the University of North Carolina Press published David Ruggles: A Radical Black Abolitionist and the Underground Railroad in New York City. Other recent publications include Chains and Freedom: The Life and Adventure of Peter Wheeler: A Colored Man Yet Living, A Slave in Chains, A Sailor in the Deep, and a Sinner at the Cross (edited and with an introduction by Graham Russell Hodges, University of Alabama Press, 2009); Friends of Liberty: Thomas Jefferson, Thaddeus Kosciusko, and Agrippa Hull (co-authored with Gary Nash, Basic Books, 2008); and Taxi! A Cultural History of the New York City Cabdriver (Johns Hopkins University Press, 2007).