Civil War Biblicism and the Demise of the Confederacy
Eran Shalev

Civil War Biblicism and the Demise of the Confederacy

The Georgian newspaper The Macon Daily Telegraph and Confederate published a New Revelation in the bleak fall of 1864, when the doom of the Confederate States of America seemed to draw closer by the day. The revelation, a pamphlet of 12 pages, was an extraordinary piece of American Old Testamentism that recast the central narratives of the Hebrew Bible as chronicles about America: North America, “the birthplace of mankind,” was sanctified, or rather Canaanized, and became the geographical center of the biblical drama: “the river that went out to water the garden of Eden…was the Mississippi-Pison, the river compassing the land of Havilah, the Arkansas; Gihon, the river lining the boundary of Ethiopia, is the Ohio. Hidekel, the Missouri, and Euphrates, the Upper Mississippi.” The New Revelation wholly conflated the biblical and American landscapes, with “the Hebrew Canaan [identified as] the United States, Mexico and Central America.” “Joshua,” the revelation’s author, could even identify “the site of the present city of New York” as the place where Noah built his ark and made preparation for his voyage. Another crucial moment in the Amero-biblical drama that the revelation narrated took place 5,000 years after the deluge, when “a weather-beaten vessel is seen, laden with the first Virginia colony.” When it lands, the sons of Abel—the Europeans, according to Joshua’s account—face the sons of Cain—the Indians—as they “swap beads for whisky.” 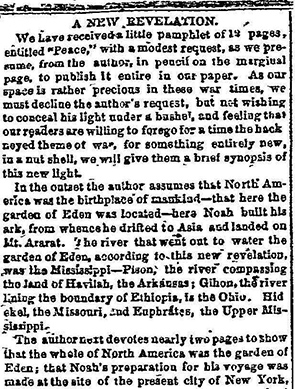 The original thirteen colonies in North America, the revelation continued, “were none other than a regeneration of the twelve tribes of Israel,” neatly corresponding to their biblical counterparts: North Carolina was Gad, South Carolina—Simeon, Dan was New York, Manasseh—Virginia, and so on, each colony “named after the corresponding territory in Israel.” At that point the author Joshua extended the liberty he took with interpreting the original narrative and described “the terrible conflict between Monarchy and Republicanism,” which apparently matched the American sectional conflict between the Union and the Confederacy. The discord ends with “the Jews’ return to Palestine with a free Government, the negroes to Africa, and a republican form of government extends from the western border of British America, half way round the globe,” throughout Europe. Only the progeny of Cain, incapable of any government, “dwell in the lands of his brothers.” These, the newspaper’s editor commented, must have been “the niggers and yankees.”[1] 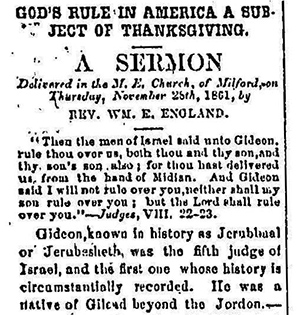 From Peninsular News and Advertiser [Delaware], Dec. 6, 1861.
Click image to view full pdf
The Revelation is remarkable in its imaginative ingenuity, but also in capturing the whole spectrum of an “Old Testamentism” that characterized antebellum America: the political interpretation of the Jewish republic as a model for American federalism; the numerous renditions of American history as an event in a biblical chronicle written in biblical English; the persistent speculations on the Hebraic origin of the American Indians, among other manifestations—all appeared in some manner in the Revelation. Beyond these particular strands, the piece manifested the fascination with biblical authenticity that characterized much of American Old Testamentism: the conflation of North America with the biblical Canaan and the United States with Israel (the New Revelation significantly avoided the typological adjectives “second” or “new” to describe America’s relation to Israel) was complete and unconditional. It is revealing to read the piece, particularly its utopian ending, while keeping in mind the abject condition of the Confederacy in its final months and the existential anxieties contemporaries confronted during that testing time; the Old Testament biblicism could apparently express not only chauvinistic self-assuredness but also national diffidence. 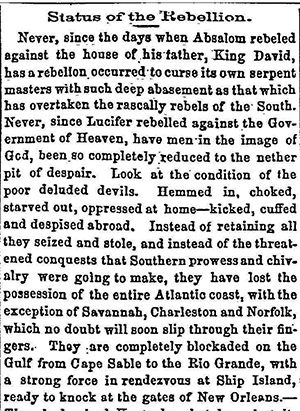 From Weekly Wisconsin Patriot, Mar. 15, 1862.
Click image to view full pdf
This idiosyncratic rendition was striking, however, only because it appeared some three decades after the peaking of the political theology I call Old Testamentism. Had the New Revelation been published in the 1820s in the western parts of New York, for example, and not in war-ravished Georgia, it would have been but one of many such manifestations of raw biblical sensibilities and would have easily blended with other biblical accounts of American history. Nevertheless, things changed after about 1830, which might explain why the New Revelation failed to resonate with the larger society in the closing months of the Civil War: the newspapers’ editor admitted that he only published the piece because he felt that his weary “readers are willing to forego for a time the hackneyed theme of war, for something entirely new.” Even wartime escapism had its limits, however, as the editor published the revelation only “in a nut shell” as “a brief synopsis,” and concluded that the piece was a “grand farce.” 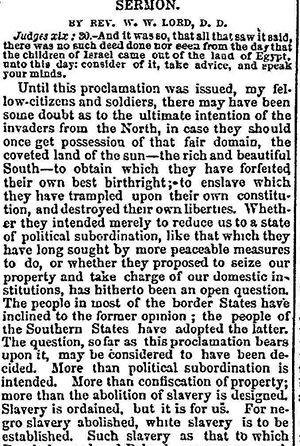 From Macon Daily Telegraph, Sep. 18, 1862.
Click image to view full pdf
The New Revelation demonstrates, nevertheless, that while the Old Testamentism I explored in American Zion may have receded in the decades leading up to the Civil War, it did not vanish. The heightened religiosity and millennialism associated with the war years indeed stemmed the decline in the disposition to make use of Old Testament metaphors and images. Even in wartime slaveholding Delaware, advocates of the Union could still describe their “government [as] the modern Israel of God, in its national capacity,” while southerners and their sympathizers in the north would see Abraham Lincoln as an American Rehoboam who split the Union and Jefferson Davis a Jeroboam leading a justified secession.[2] In the same vein, northerners equated the southern secession to biblical rebellions, notably to Absalom’s disastrous revolt against his father David, while southerners drew comfort in seeing themselves as the outnumbered kingdom of Judah led by Abijah and Asa, fighting the mightier and errant kingdom of Israel.[3] More generally speaking, the older forms and structures of the references to the United States and the Second Israel resurfaced remarkably during the years of struggle, apparently in order to ensure Americans that God had not abandoned them.[4]  Nevertheless, this wartime flourish ended after the demise of the Confederacy as American writers would less and less refer to their reunited nation as a latter day Israel. American prints and newspapers, once an endless source of Hebraic allegories, would reflect after 1865 the new and considerably secularized form of political speech.

[4] For an impressive wartime restatement of the United States as the Second Israel see Phillips, The American Republic and Human Liberty Foreshadowed in Scripture.

Eran Shalev is a Senior Lecturer in the history department at Haifa University, Israel. He is author of Rome Reborn on Western Shores: Historical Imagination and the Creation of the American Republic (University of Virginia Press, 2009) and American Zion: The Old Testament as a Political Text from the Revolution to the Civil War (Yale University Press, 2013)