Diversifying the Graduate School Pipeline with Under-Represented Scholars: An Innovative Program of the African American Literatures and Cultures Institute

For the last five summers, the two of us have coordinated the African American Literatures and Cultures Institute (AALCI)—a program for college students with interests in eventually pursuing graduate degrees. The Institute convenes on the campus of the University of Texas at San Antonio (UTSA) for the month of June. The program has provided us with important opportunities to enhance undergraduate students’ learning and to orient them toward a broader as well as deeper realm of ideas concerning African American studies. 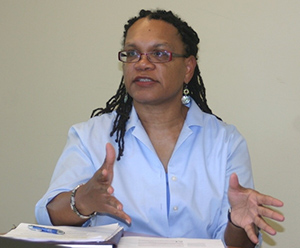 Moody founded the Institute in 2009, and has directed it since its inception. Her cultivation of the project emerged from her increasing alarm about the shallow pipelines of both under-represented populations in graduate programs in the United States and graduate students and other researchers devoted to sustaining African American literary and cultural studies. Influenced by Nellie Y. McKay’s famous essay, “Naming the Problem that Led to the Question ‘Who Shall Teach African-American Literature?’” (published in PMLA in May 1998), Moody applied endowed funds provided by the University of Texas at San Antonio to the creation of the AALCI.

In addition to serving as one of ten members of the AALCI Advisory Council, convened in 2009, Rambsy has functioned as the teacher and coordinator—in short, the Creative Master Consultant—of activities for the Institute. He determines the course curriculum and a variety of out-of-class activities that the students, or Fellows, participate in during their time in the Institute. 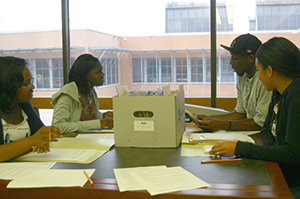 Together, from our inaugural group in 2010, we have worked with five cohorts totaling 36 students. We have enrolled 27 women and nine men. The students have come from 28 different colleges and universities. Sixteen of these schools have been predominantly white universities, 11 have been Historically Black Colleges and Universities, and one (viz., UTSA) has been a Hispanic Serving Institution. They represent as well a broad spectrum of academic concentrations, with majors and minors from African American Studies to Marine Biology to Sociology. 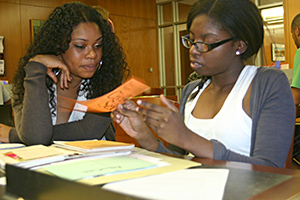 Our course readings cover a broad sampling of subjects in African American Studies and literary studies. Each summer, for instance, we cover scholarly essays, multimedia editorials, and poems  that focus on slavery and struggles for liberation. We cover essays on feminism and Black Power. Central to our curriculum is Afrofuturism, which provides a framework for highlighting intersections between race and technology through both historical and contemporary analyses. 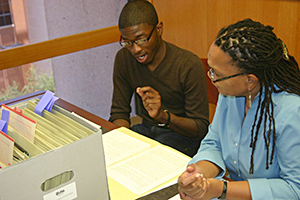 The Fellows routinely express collective excitement about our annual unit on the topics “black nerds” and “acting white.” Somehow, those topics inspire considerable conversation, as the students arrive at the Institute having had many discussions with a range of peers about those concepts.  As students who have prioritized intellectual pursuits and in turn been identified by their individual home-institution mentors as talented thinkers, they indicate they have spent considerable time mulling over concepts like nerdiness and black authenticity. Working together in our program gives them a space to explore their own scholarly identities.

The Fellows express strong interests in African American subject matter, yet they have had few, if any, opportunities to participate in extended seminar-style discussion sessions at their home institutions. Not surprisingly, the Fellows report that the discussions constitute one of the most intellectually stimulating experiences that they have had as undergraduates. Of course, seminar discussions are only one component of AALCI. 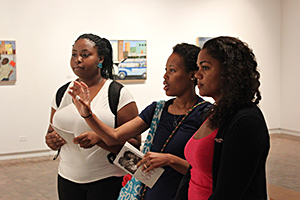 In addition to the professional statements, the Fellows pursue independent research, with guidance from both of us, for scholarly projects that will serve as their writing samples for graduate program applications. The Fellows complete different stages of development on individual research projects, for some of them have already begun projects at their home institutions while others are in the initial steps of sorting their intellectual interests and selecting research topics. Over the course of the summer, however, all of the Fellows make remarkable progress, which they offer to the UTSA community and the public in an open poster session that highlights key aspects of their projects.

As academics have widely discussed, the GRE has served as a notable barrier for large numbers of African American and other under-represented undergraduates seeking to pursue graduate study. Therefore, AALCI includes a rigorous GRE component. Adam Johnson, proprietor and lead instructor of Lonestar Education in San Antonio, designs and conducts the GRE preparation workshops throughout the course of the Institute.  Fellows take both a pre-test and a post-test, which enable them to mark their development across the AALCI period and also to recognize their readiness for the GRE by the end of Johnson’s course. 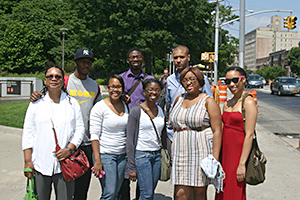 Each June toward the end of the program, we coordinate a trip to New York City. The cultural excursion provides the students with opportunities to explore one of the greatest cities in the world, reading the metropolis through their newly refined African American Studies lens. During the trip, we visit the Brooklyn Museum, the Strand Bookstore, the Schomburg Center for Research in Black Culture in Harlem, and the African Burial Ground.  To learn more about our visit to the Strand, please see “Nerdy Goodness”— How an Annual Bookstore Trip Is Inspiring Young Black Scholars.

Along with these formal activities in which we engage as a group, the Fellows are encouraged to explore the city for other areas and events—organized and/or impromptu—that captivate them. Our trip to New York City is in fact the culmination of a month-long series of explorations. We ask the students to prepare and post concise blogs about their excursions, some written individually and others collaboratively, as a way to enrich their experience by articulating it in language they will share. This assignment has resulted in an array of stunning images and recollections about their impressions.

We return exhausted and exhilarated to UTSA, ready to close the year’s Institute with a program that allows time for final presentations and broad-scale reflections. The two of us have felt moved each year by witnessing each Fellow’s development and unique shift over the course of their time with us. We also recognize that opportunities for the kind of illuminating experiences we have both enjoyed through our involvement with the Institute are too rare among professors.

After the Institute, the Fellows go on to take the GRE and to complete their senior year in college. Following their undergraduate careers, most of our past Fellows have attended graduate school in various programs, including at Howard University, Texas State University, Northwestern University, Southern Illinois University Edwardsville, Loyola University-Chicago, and U. C. Riverside. To date, several have already earned the MA degree. Their successes inspire us for many more years of AALCI cohorts.

Joycelyn Moody is currently the Sue E. Denman Distinguished Chair in American Literature at the University of Texas at San Antonio, where she researches and teaches courses on African American literature. She is coediting special issues of American Periodicals and MELUS: Multi-Ethnic Literatures of the United States on the topic of black print culture studies, both of which appeared in December 2015. Moody is currently editing A History of African American Autobiography, to be published by Cambridge University Press.
Howard Rambsy II is Associate Professor, Department of English Language and Literature, at the Southern Illinois University Edwardsville. He is the author of The Black Arts Enterprise, a study of publishing practices among African American poets of the 1960s and 1970s. He is the founding editor of the Cultural Front online resource, which focuses on black poetry, African American cultural arts, and technology.