Locating Black Canada in the U.S. Periodical Press: A 19th-Century Network of Affiliations

In her time Charlotte Elizabeth Linden would have been called a “race woman.” From the 1890s to the mid-1910s, the Cleveland Gazette reported on her involvement in a wide array of African American causes. At various junctures she served as president of one of the many U.S. literary societies named after Phillis Wheatley; chair of committees for her church; state organizer of the “colored work” of the Women’s Christian Temperance Union; president of the City Federation of Women’s Clubs; representative for the Colored Knights of Pythias; and more. As Dr. Thomas William Burton wrote:

I admire a woman who delights in working with the hand as well as the head; who, when she works, has something to show for her labor; and wherever she may chance to be, can adapt herself to the surroundings, and there remain without assumption. These qualities we can find in the person of Mrs. Henry Linden, of Springfield, Ohio.

By all accounts, Linden would seem to fit firmly within the narrative of late nineteenth-century African American racial uplift, oriented to improving African American life in a way we also recognize as firmly national. Yet, in a self-published book of poetry, Linden included a poem titled “To the Queen of the British Government” in which she described herself as “a Canadian complete.” 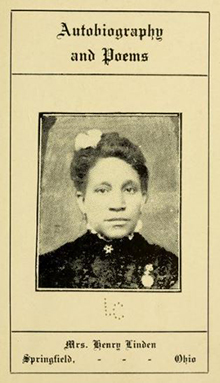 Linden was born to Henry Lee and Isabella Jane Oldham in London, Ontario, in 1859. Like many Black Canadians of the era, their roots were in the United States. With the outbreak of the American Civil War as many as two-thirds of this black population returned or migrated to the United States, the Lees among them. This population, identified by historian Adam Arenson as “African North Americans,” has been historically understudied and under-theorized. The traditional impulse has been to characterize them as exiled Americans, primarily unaffected by their time—or even birth—in Canada. Yet, examples like that of Linden suggest a more complex network of affiliations, both imaginary and familial. Readex’s online resource African American Newspapers, 1827-1998, provides an opportunity to begin to track such affiliations through the black press.

Nineteenth-century borders were porous, especially where newspapers were concerned. During the Antebellum Period, many abolitionist newspapers published in the United States had agents in Canada, reflecting their international readership. After the Civil War, news began to travel more frequently in both directions. Whereas previously refugees from slavery and their descendants might seek American news in Canada, post-Emancipation, families returning to the U.S. who had left friends and family sought information about Canadian happenings.

Also contributing to the rise of Black Canadian coverage in the U.S. press was the lack of Canadian venues for publishing the same. For a variety of reasons, the black press in post-Civil War Canada failed to establish a viable long-running newspaper, akin to those in the United States, meaning that American newspapers became the primary venue for publishing information about many Black Canadian communities. Thus post-Emancipation, black communities who wanted to see themselves represented in print began submitting columns to African American newspapers.  A correspondent from Guelph, Ontario, might report on local activities, as in this article in Detroit’s Plaindealer of 23 October 1891, titled “Across the Border”:

Your former correspondent, Miss Melissa Smith, left on Monday last, for Hamilton, Ont., to join the Canadian Jubilee Company, and will be absent, if all goes well, about five months. We very much regret to lose Miss Smith from our social and church societies. She was organist of the B.M.E. church and Sunday school, and also secretary of the latter. She has a very fine soprano voice. Success to you Miss Smith.

Rev. Mr. Minter returned home on Thursday, after a very pleasant ten days’ visit to Windsor and Detroit, having been called to Windsor to address some church matter there. He is very favorably impressed with Windsor and the good people there.

Mr. Robert Johnson has sold his property to Mr. H. A. Smith.

Your Tramp stopped at Woodstock on Wednesday night last and to his surprise met a bridal party at the station. Mr. S. G. Robertson, head-waiter at the Queen’s hotel, Toronto, was on Wednesday, the 14th, married to Miss L.C., second daughter of the late Rev. L.B. and Hannah Anderson. Rev. J.C. Farthing officiated. They received a number of choice presents.

Unfortunately, it did not go well for Miss Melissa Smith, who soon found herself home in Guelph, Ontario. However, the reports of her success—or lack thereof—are far more fruitful for researchers. Scholars of Black Canada would find much of interest here; nineteenth-century Canadian newspapers did not generally report on the social lives of black residents. The activities of black churches, schools, and organizations, such as the Canadian Jubilee Singers, suffer from a scarcity of documentation. Little to nothing is known about the U.S.-born William T. Minter, author of The Doctrine and Discipline of the British Methodist Episcopal Church, published in Toronto in 1892—though it is possible he fled to Canada after being charged with seducing a congregant in Kansas and concealing their infant, another incident preserved only in the popular press.

If those investigating nineteenth-century Black Canada find U.S. newspapers an unmined resource, scholars of African North America benefit from revelation of the transnational affiliations of subjects. As Eric Gardner argues in Unexpected Places: Relocating Nineteenth-Century African American Literature, there is a need to expand our geographic charting of black lives if we are to achieve a fuller more nuanced understanding of black productions. Reports such as those included in African American newspapers detail cross-border visits, collaborations, and networks. Indeed, as accounts from Canada attest, African North American print networks were vast: one Detroit paper was read not just in the Ontario cities and towns of Toronto, Collingwood, and Woodstock, but also in Kamloops, British Columbia, population 500.

While this may reflect a sense of isolation on the part of some Canadian residents, rooted in smaller black communities, it did not signal a sense of inferiority. Like Charlotte Linden, with whom we began, those residing or born in Canada often articulated a belief in what they saw as their superior situation. As series of articles published in the 1890s attest, many Black Canadian residents felt entitled to lecture their African American cousins on the need to leave the United States and seek refuge under the British flag. 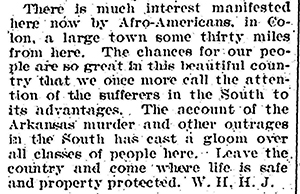 As one Canadian, distressed by the reports of lynchings and other racial violences wrote:

The chances for our people are so great in this beautiful country that we once more call the attention of the sufferers in the South to its advantages. The account of the Arkansas murder and other outrages in the South has cast a gloom over all classes of people here. Leave the country and come where life is safe and property protected.

It is in this way notable that we see some of the most nationalist assertions of Black Canadian identity articulated not in Canadian resources, but in the American press.

Ultimately, attending to the Canadian coverage in African American newspapers has the potential to enrich our understanding of African North American life. Those accounts are not simply missives from discrete communities in a foreign nation, but rather demonstrations of the affiliations of black peoples across borders—peoples who imagine themselves occupying and engaged in a far more transnational space than has been traditionally formulated. The letters and articles signal, importantly, possibilities: the possibility of migration, the possibility of reunion, the possibility of voting, the possibility for particular forms of employment. Which side of the border these things occur on is less relevant than the fact that, through these archival documents, we have the opportunity to witness their ongoing negotiation.