In August 1799, as partisan antagonism heated up in advance of the forthcoming U.S. presidential election, the Republican press worked hard to paint the Federalist establishment in the colors of an imperial court. Drawing comparisons with Caesar’s Rome, these newspapers pointed out that leading figures in the political and business elites of the new nation were tied to each other by more than just their shared social position.

“General Hamilton,” wrote a correspondent to the New London Bee, “is married to the daughter of Gen. Schuyler, of New York sister of Mrs. Church. Mr. Church then called Carter, was co-contractor in the army with col. Wadsworth, both of whom made great fortunes by the war. And the son of Mr. C.,” the writer went on, “is about to marry the daughter of Mr. Bingham of Philadelphia, the federal Senator. Thus are our advocates for war cemented together.” 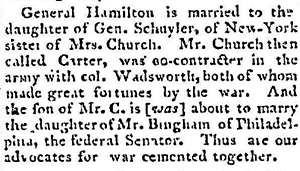 The article was soon reprinted in the Philadelphia Aurora. Its message was clear: if the Quasi-War with France were to escalate, as men like Hamilton seemed to wish, it would be ordinary folk doing the fighting and the dying, while the Federalist aristocracy would be the ones to benefit. 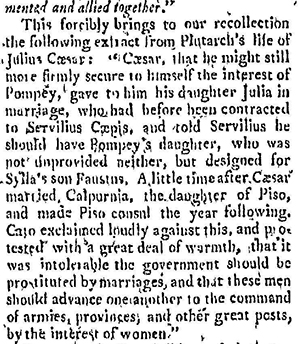 Though perhaps the Hartford-based magnate Jeremiah Wadsworth was the real target of this New London author, it was his erstwhile partner, John Barker Church—alias John Carter—who sat at the center of the network it described. But who was this mysterious Mr. Carter, and how did he find himself at the pinnacle of Federalist high society at the end of the eighteenth century's “Age of Federalism”? No scholar has yet told his story, but the digital Early American Newspapers collection helps to sketch its outlines.

In fact, Carter was an English bankrupt who first arrived in New York at the very outbreak of the Revolution, 1775. “An old fashioned english Whig,” as fellow émigré William Duer described him, Carter soon found work as a clerk for the revolutionary army's Northern Department, then commanded by Philip Schuyler, one of the state's leading landowners. Then in 1777, much to the old general's consternation, Carter eloped with his eldest daughter Angelica. It was the first in a series of steps that would launch him to the heights of American society.

It did not take long for Carter to gain the recognition and support of the Schuyler family. After all, he was one of the men commissioned by Congress to audit the general's accounts. But his new-found connections gave him much-expanded opportunities in business. By 1780, Carter made his second great step towards success: he partnered with Wadsworth in the contract to supply the French Army that had just landed in Rhode Island. Over the next three years, the pair rose to the ranks of America's richest merchants, heavy investors in Robert Morris' Bank of North America, and soon in the Bank of New York as well. 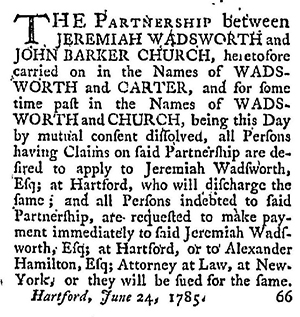 When peace was declared in 1783, Wadsworth and Carter sailed for Paris to settle their account with Louis XVI. Alongside Carter went his wife Angelica, and their two young children. They may not have known it at the time, but they would hardly see America again for more than a decade. Once in Europe, secure in the spoils of his wartime contracts, Carter finally took back the name of Church, paid off his debts in England, and set about establishing himself in London society. He wound up the partnership with Wadsworth, and began new speculations on both sides of the Atlantic. His brother-in-law, Alexander Hamilton, who had married Angelica's younger sister, was to be his lawyer and commercial agent in America.

As much as she enjoyed London life, and the parties she threw at Downe Place, her villa near Windsor, Angelica Church missed her family and her native country. In 1789, she made a six-month visit to America, crossing and recrossing the Atlantic on the packet ship, Tankerville, which had once held Letters of Marque against the French during the Seven Years War. With her on her westbound voyage, as the Gazette of the United States recorded, went “Francis Van Berkel Esq., Resident from their High Mightinesses the States General of the United Netherlands.” As it happened, Van Berkel was also a partner with Hamilton and Church in the Bank of New York. Transatlantic financial connections had already begun to proliferate.

Throughout the family's years in England, Angelica Church wrote frequently to friends and family in the United States. These letters provide many details of their life in Europe, as do the diaries and letters of compatriots like Gouverneur Morris who visited them there. It is the Churches' life after their return to America in 1797 that is more difficult to piece together, and where newspaper sources become even more useful. We know John ran a transatlantic trade in national bank stock, for instance, because on several occasions those shares were lost at sea and had to be recertified. In 1800, he became an honorary member of the Society of the Cincinnati, a fraternal order of old revolutionary officers in which his brother-in-law was a leading light. He was indeed a stalwart of the Federalist scene. 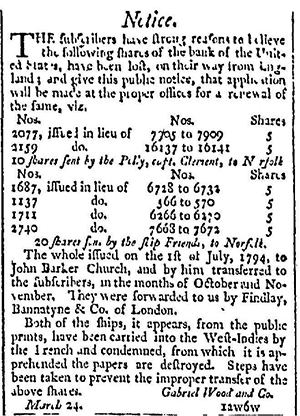 The most recent (that is, the youngest) piece of evidence from Readex's Early American Newspapers to illuminate the mysterious Mr. Carter comes from almost a century later—the 1895 obituary of his granddaughter, Mrs. John Warren, in the New York Herald Tribune. 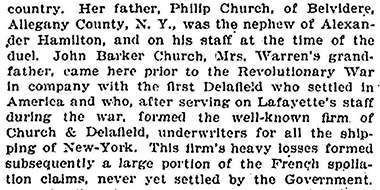 Based seemingly on family recollection, it records that Church established “the well-known firm of Church & Delafield, underwriters for all the shipping of New-York.” According to the Herald Tribune, “this firm's heavy losses formed subsequently a large part of the French spoliation claims, never yet settled by the government.” It seems his family had not forgotten this loss, a century later. We may perhaps conclude that war with France did not turn out so lucratively for John Barker Church after all.

Tom Cutterham gained his doctorate at St Hugh's College, Oxford, and took up the Cox Junior Fellowship at New College in 2013. His first book, Gentlemen Revolutionaries: Power and Justice in the New American Republic, will be published by Princeton University Press. He is also working on a joint biography of Angelica Schuyler Church and her husband John, which will explore the transatlantic world of high finance and high society during the Age of Revolutions.