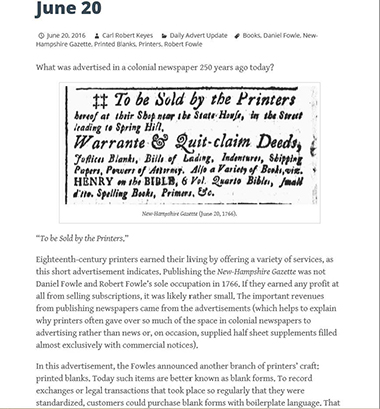 The Adverts 250 Project qualifies as a public history and digital humanities enterprise in several regards.  All of the content is delivered electronically via the blog and Twitter; anybody surfing the Internet may access it.  In addition, the project is only possible because of Readex’s Early American Newspapers, a searchable database of images—or “digital surrogates”—of newspapers which are part of the collections of some of the nation’s most important archives.  This digital humanities resource makes it possible to conduct research using eighteenth-century newspapers without stepping foot in an archive.  I designed the Adverts 250 Project to be conducted completely online, consulting virtual newspapers from my office or my home or wherever I happened to connect to the Internet.  As a result, it showcases some of the possibilities of the increasing digitization of historical sources.

This accessibility removed one of the main obstacles to having undergraduates work intensively with primary sources as part of their coursework.  My college’s library has a subscription to Early American Newspapers that I use for research purposes, but it is available to all members of the campus community.  That allows me to use it for teaching purposes by designing assignments that require students to conduct independent research using the sources available via Readex’s database.  Traditionally, it has been impossible for a variety of reasons to get students into brick-and-mortar archives where they could handle original documents.  Now, however, my students can visit virtual archives anytime they are online. 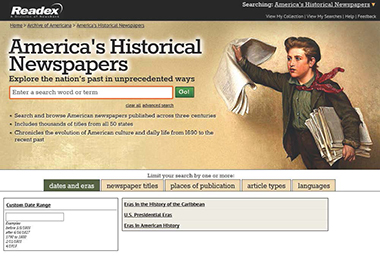 Although I have included sources from Early American Newspapers in previous Colonial and Revolutionary America courses on occasion, I decided that the Adverts 250 Project presented an opportunity for students in my spring 2016 Public History class to engage in much more sustained use of that database and, in turn, use the sources as starting points for additional research.  As one of their major projects for the semester, each student served as guest curator of the Adverts 250 Project for two weeks, assuming a variety of responsibilities similar to those they might have in certain public history careers.  In the process, students learned about the structure of a virtual archive and how to navigate it effectively, in addition to gaining knowledge about commerce, politics, and everyday life in colonial America. 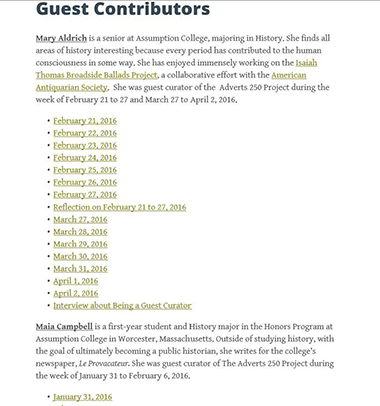 Each student guest curated the Adverts 250 for one week before and one week after spring break.  Working on the project for a week at a time allowed them to immerse themselves in the assignment.  Since the project’s methodology specifies that all featured advertisements must have been published exactly 250 years ago to the day (or, if no newspaper was available from that day, then an advertisement from the most recent one), students first had to compile a census of which newspapers were published, and on which days, during their week of curation.  Then they had to examine those newspapers and select one advertisement for each day.  Once I approved their selection, they set about researching some aspect of it.  I left it up to them to decide what they considered interesting and important, though we discussed some possibilities before they pursued independent research.

Next they submitted a short analysis (typically 150 to 300 words) that included citations and hyperlinks.  I suggested revisions to their prose and also flagged claims or arguments that did not work or needed more effort, often suggesting additional sources to consult.  Finally, students submitted a final draft for each advertisement, which I published along with my own “additional commentary” that sometimes built on their analysis and other times explored another aspect of the advertisement or additional context from the issue in which it appeared.  This was an extremely collaborative process.  Only in my department’s capstone research seminar have I worked so closely with students on multiple stages of research and writing. 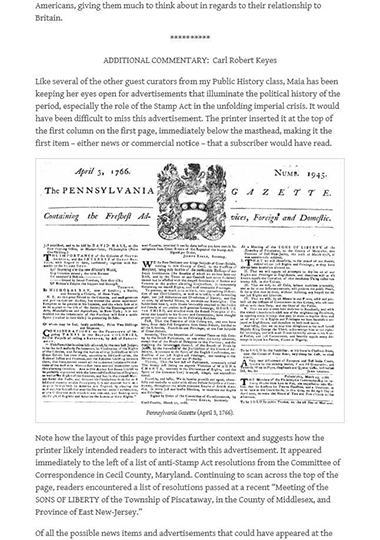 The results far exceeded my expectations.  As guest curators, my students became junior colleagues invested in the project and its success.  The persistent problem of the “audience of one” evaporated: all too often students do not turn in their best work or challenge themselves to improve their skills because they know that the professor will be the only other person who ever sees their assignments.  That was not so in this case!  As they researched, wrote, and revised content for public consumption students felt that they had greater stakes in the project than in more traditional essay assignments.  This work seemed more authentic and students readily identified the purpose of the tasks that were involved, as opposed to research papers that students often see as jumping through a series of hoops for the sake of completing a class.  Together, we worked on many of the traditional skills that history courses help students to develop and refine—writing, critical thinking, research, information literacy—but via a project that excited and engaged them in new ways.

Students also became invested in the project because they felt ownership.  As I mentioned above, they chose which advertisements to feature.  This allowed them to pursue their own interests as they simultaneously learned about colonial America and digital humanities resources and methodologies.  One student was particularly interested in women’s history; whenever possible she chose advertisements placed by women.  Another student, the child of immigrants from Jamaica, selected several advertisements for goods imported from Jamaica and other Caribbean islands.  Yet another student explored the places mentioned in her advertisements in an effort to discover to what extent the urban landscape had changed in the past 250 years.  In the process, students identified a variety of other sources—some written by modern scholars and others created during the eighteenth century but digitized in the twenty-first (such as trade cards, maps, and paintings)—that fleshed out the stories encapsulated in the advertisements.  They delved into the history of colonial America much more deeply than if I had given traditional writing assignments or provided a reading list of specific books and historical sources for them to consult and discuss in class. 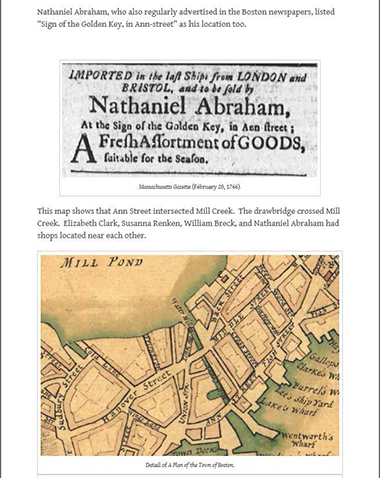 Working with my Public History students on the Adverts 250 Project went so well that I have incorporated it into my Colonial America course during the Fall 2016 semester, along with a companion project tentatively called the Slavery Adverts 250 Project.  Over the years I have experimented with various teaching methods, but I consider this to be one of my most successful and innovative approaches.  Thanks to the primary sources made available via the Early American Newspapers databases, I have devised effective ways to integrate my own research into the undergraduate classroom experience.  Through this hands-on project, students did not merely learn about the past; instead, they did history.

Carl Robert Keyes is an associate professor of history and director of the Women’s Studies Program at Assumption College in Worcester, Massachusetts. He is in the process of revising Advertising in Early America: Marketing Media and Messages in the Eighteenth Century. His most recent articles and chapters include “History Prints, Newspaper Advertisements, and Cultivating Citizen Consumers” in American Periodicals and “A Revolution in Advertising: ‘Buy American’ Campaigns in the Late Eighteenth Century” in We Are What We Sell, a three-volume anthology of advertising history. He has received research fellowships from the McNeil Center for Early American Studies, the Program in Early American Economy and Society at the Library Company of Philadelphia, and the Winterthur Museum, Garden, and Library. In 2015 he was elected to membership of the American Antiquarian Society, and in January 2016 he launched the Adverts 250 Project, a daily research blog examining an advertisement published in an American newspaper 250 years ago that day.

American History
Primary Sources in the Classroom
Trends in Database Use