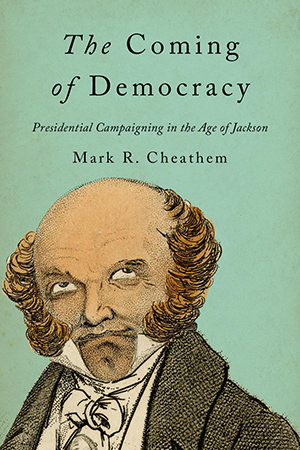 During the 1828 presidential campaign, controversy over Andrew and Rachel Jackson’s marriage placed discussions about women and their virtue at the forefront of anti-Jacksonian criticism. That conversation failed to abate once Old Hickory assumed the presidency, even though his wife died before he made the trip to Washington in early 1829. Jackson appointed his friend John Henry Eaton as secretary of war, which brought Eaton’s new wife Margaret into the center of the administration. Margaret Eaton possessed an unsavory reputation among Washington women, who found her too bold, too flirtatious, and too interested in politics to fit their expectations for respectability. These women also believed that she and John Eaton had been engaged in an extramarital affair prior to the death of Margaret’s first husband, John Timberlake. Jackson’s defense of the Eatons and of Margaret’s virtue consumed the first part of his presidency and led to the dissolution of his cabinet, as wives of the department heads refused to associate with a woman they considered a whore.

John Eaton’s resignation from the cabinet in 1831 should have ended Margaret Eaton’s role in presidential politics. As Jackson sought a second term in 1832, however, his opponents used Margaret as a tool to try to undermine his political heir Martin Van Buren and defeat Jackson’s reelection bid.

Even before Democrats nominated Van Buren for the vice presidency in May 1832, many anti-Jacksonians believed that the New Yorker had been angling to become Jackson’s successor. These critics used Margaret’s example to emphasize Van Buren’s own alleged immorality. “It ill becomes the Globe [a pro-Jackson newspaper in Washington] to talk of Martin Van Buren’s private worth, when stories are circulating, and facts are known in almost every house in Washington, which could rank him as a man with Mrs. Eaton as a woman.” The anonymous correspondent praised “the ladies of Washington” for “put[ting] Mrs. Eaton under a ban [and] reform[ing] the morals of this city” but noted that “they cannot do every thing. They can banish women, but they cannot banish men who transgress the laws of society. They cannot tumble them down from their high offices.” (Portland [Maine] Advertiser, 14 February 1832.) 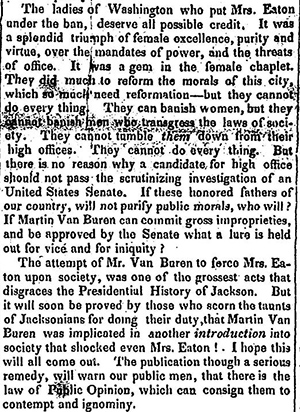 Later that year, anti-Jackson editor Duff Green delighted in using his Washington, D.C., newspaper, the United States Telegraph, to jab at his former ally. With less than two months remaining in the campaign, Green published several pieces that described Margaret’s role in the dysfunction of Jackson’s inner circle. One letter to the editor depicted the president as a tyrant who was being hoodwinked by Van Buren. Upon assuming the secretary of state position in 1829, Van Buren “entreat[ed] ladies who came to the seat of Government; to visit the spurious bride Bellona [i.e., Margaret Eaton, the Roman goddess of war].” “From this moment,” the anonymous writer continued, “the whole business of the administration was blended, more or less, with the movements of Mr. Van Buren’s protégé. She could make what appointments she pleased. A card upon her mantel, was a passport to presidential favor.” (United States Telegraph Extra, 3 September 1832, p. 6.) Another contributor noted that Jackson was traveling to Nashville to campaign for John Eaton’s placement in the U.S. Senate. Why was the president choosing Eaton over another close ally, Felix Grundy? “Bellona must be gratified” was the only logical conclusion. (United States Telegraph Extra, 3 September 1832, pp. 7-8.) 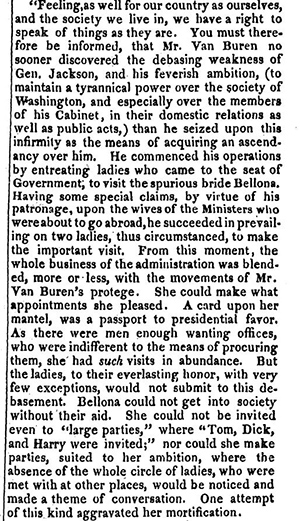 Despite these attacks, the Jackson-Van Buren ticket won in 1832. As Jackson’s second term drew to a close, Democrats nominated Van Buren to succeed Old Hickory. The anti-Jackson opposition, now called the Whig party, found many things about which to criticize the vice president. Included in their attacks were Van Buren’s relationship to women. Of particular significance in the 1836 campaign was the Democrats’ choice for the vice presidency, Richard Mentor Johnson. A War of 1812 hero and congressman, Johnson had lived openly with Julia Chinn, an enslaved woman who birthed two daughters from their relationship. After Chinn died in 1833, Johnson began a relationship with another enslaved woman, Cornelia Parthene.

These circumstances proved politically problematic not only for Johnson but also for Van Buren. Duff Green’s United States Telegraph included an exchange, intended to be humorous, that highlighted what Americans could expect from a Van Buren administration. “Dick Stout” recounted the dialogue between two correspondents, “Bob Short” and “Tom Long,” about Johnson’s familial arrangements. When “Tom” asked for proof that Van Buren would accept his running mate’s interracial household, “Bob” reminded his friend of New Yorker’s defense of Margaret Eaton. The “principle . . . to be carried out by Van” from 1829-1831 had been “that all the officers of the Government, and their families, are on a perfect equality, and the rule is, that no man shall remain in the Government, who does not acknowledge that principle.” Following that logic, “Tom” concluded that if Van Buren were elected, Democrats would “make a devil of a figure” at White House events, “bowing and making court to Darkies! ! !” (United States Telegraph, 29 July 1835, p. 2.)

Whigs were not the only ones who found it expedient to use women as objects of attack in newspapers. At a Van Buren meeting held on 8 January 1836, former U.S. representative William Allen claimed that during the War of 1812, the women of Chillicothe, Ohio, had presented one of the Whig presidential candidates, former general William Henry Harrison, with a petticoat for ordering the abandonment of a fort during the War of 1812. The implication of the petticoat, according to Allen, was that Harrison had been a coward. (Elyria [Ohio] Republican, 11 February 1836.) Whigs countered the Democratic attack by declaring, “a ruse so contemptible is only worthy of the parisites of the little Magician [Van Buren].” At one meeting, Whigs also defended the Chillicothe women by approving a resolution that sought “to remove from the ladies an imputation injurious to their sense of propriety,” pronouncing the petticoat story “utterly false, and that nothing like it ever transpired.” (Scioto Gazette [Chillicothe, OH], 10 February 1836 and 28 September 1836). 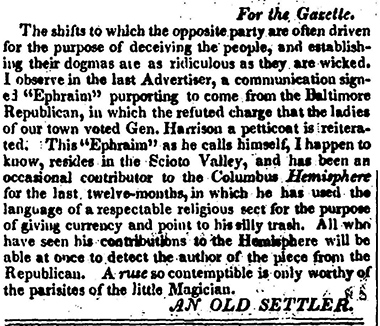 These brief examples only scratch the surface of what awaits scholars looking to research women’s inclusion in the 1832 and 1836 presidential campaigns. Possible avenues of scholarly exploration include the more active roles that women played: women’s public toasts; their attendance at, participation in, and response to campaign events; and their political writings, to name only a few. Examining the newspapers of the Jacksonian period reveals the foundation on which women carved out a role in public politics and participated in activities that eventually led to their acceptance as political equals, in theory, if not always in practice.

Mark R. Cheathem is an associate professor of history at Cumberland University in Lebanon, Tennessee. His Andrew Jackson, Southerner was recently published by LSU Press. He blogs about his research and teaching at Jacksonian America.