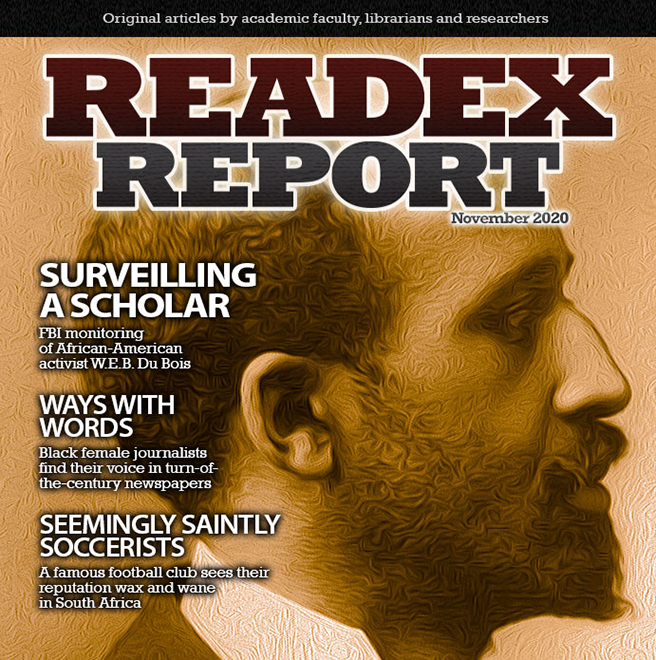 Resisting Repression: W. E. B. Du Bois and the Age of Global Surveillance

Nineteenth-century African American newspapers attracted black writers, subscription agents, printers, and readers eager to imbibe news and opinions from their own heterogeneous, diverse communities.  They considered the impact of American slavery on global trade and commerce and global appropriations of African American culture and ideas. They ranged from commercial publications for multi-ethnic readerships, to those that emphasized religion and the cultural edification of their readers, to those that pressed the urgent matter of ending American bondage.

This essay extends discussions of African Americans’ writings in the nineteenth-century press by sharing graduate students’ research from Barbara McCaskill’s Spring Semester 2019 Seminar on Early African American Literature at the University of Georgia.  Using Readex’s African American Newspapers, Series 1 and 2, students explored the respectability politics of clubwoman Gertrude Bustill Mossell (1855-1948) in The New York Freeman, the antislavery influences on Frances Ellen Watkins Harper (1825-1911) by The North Star, and the anti-lynching viewpoints of Ida Wells Barnett (1862-1931) for The Cleveland Gazette.  By discussing womanhood, religion, and slavery in conversation with or in response to other writers, Mossell, Harper, and Barnett legitimized their voices, demonstrated the importance and urgency of their ideas, and extended their writings to a wide political and geographical range of readers.

The New York Freeman (1884-87), originally titled the Globe (1880-84), was a precursor to the popular, influential weekly New York Age.  By the early 1890s, the Age had logged an impressive circulation of 2,000 readers (Greenidge 272). Timothy Thomas Fortune molded all three of these papers—the Globe, Freeman, and Age—into provocative forums for black intellectual thought and lively platforms for the expression of civil rights activism. His editorials condemned what he found to be “corrupting principles” in the Democratic and Republican political parties (Penn, 134, 137).  In 1886 he tapped Gertrude Bustill Mossell, who used her married name of “Mrs. N[athan]. F[rancis]. Mossell,” to write a biweekly column for the Freeman titled “Our Woman’s Department.”

Mossell added her sentiments about black women’s roles in and out of domestic spaces to the Freeman’s news, gossip, fashion notes, advertisements, and business reportage.  One student in the Early African American Literature seminar evaluated how she specifically countered the ideas of the white author Helen Ekin Starrett (1840-1920).  A popular journalist based in Illinois, Starrett is also remembered for her books The Future of Educated Women (1880) and Letters to a Daughter (1882).  She contributed to periodicals such as the North American Review and Chicago’s Magazine before her election as the second president of the Illinois Woman’s Press Association (Burt 78). By challenging Starrett’s notions of woman’s roles, Mossell redefined femininity and motherhood to include respectable African American women.

In her 13 February 1886 column, Mossell responded specifically to a reprint of Starrett’s “Two Types of Women” in The Woman’s Magazine (Erlandson 42). Starrett differentiated between women who required much encouragement from their husbands and others who were more confident about their domestic duties. Yet all women, she stated, bore primary responsibility for their daughters’ moral education. Citing the shared parental responsibilities that she observed in African American families, Mossell criticized Starrett for downplaying how fathers shaped daughters’ conduct and aspirations.  By confronting Starrett’s opinions before reading publics, and undercutting her directly and indirectly, Mossell established her own wisdom and expertise. Her “Woman’s Department” column shared child-rearing advice that pertained to African American lives (Sherwin, “Mrs. N .F. Mossell”).

Like the post-Reconstruction era Freeman, The North Star (1847-51) of Rochester, New York, founded and edited by Frederick Douglass, reported on a breadth of African American experiences.  Signed from Columbus, Ohio, with the initials “W. W.,” a letter very likely written by the Rev. William Watkins (1801-58) titled “The American Religion Pro-Slavery” appeared in the 29 September 1848 issue.  Watkins had led, as his letters in other papers indicate, the Colored Citizens of the Free Soil Party, quite active in Ohio at the time.  His piece denounced white American Protestants who supported slavery, and he criticized Afro-Protestant communities too timid or self-serving to call their coreligionists out on this wrong. Watkins’ prophetic voice participated in the jeremiad tradition, citing biblical sources to warn all Americans of slavery’s destructive consequences if they did not end that evil.

One year later, in her 1848 pamphlet Forest Leaves, the yet unmarried Francis Ellen Watkins published her poem “Bible Defense of Slavery.”  It did not appear in the newspapers, yet reviews of her antebellum collected works in The Provincial Freeman (1853-57) and elsewhere suggest their popularity with black readers. Her poem seconded the opinions of Watkins, who happened to have been her ward and teacher, and took down apologists for slavery like Josiah Priest (Clayborn, “Prophetic to Enter”). Priest’s Slavery, As It Relates to the Negro, or African Race (1843) had used biblical verses to countenance white supremacist assumptions about African inferiority and to encourage colonization schemes.  As a student in our seminar concluded, Harper’s poem reiterated her guardian’s rage against hypocritical white and black Protestants. She extended her critique from Watkins’s by accusing Americans of betraying their founding republican narratives of inclusion, liberation, and justice.

Another example of the interplay between Harper and antislavery writers like Watkins from our student research was her poetic use of slave auction imagery. Harper’s works contributed to conversations in the antebellum black press about the trauma of such separations and the objectification of enslaved peoples. Such literature culminated in what became known as reportage on “The Weeping Time,” the largest known U.S. slave sale. In its 25 March 1859 issue, Frederick Douglass’ Paper reprinted “A Great Slave Auction,” the eyewitness report of this massive sale. Its author was the white New York Tribune correspondent Mortimer Neal Thomson (his pen name was “Q. K. Philander Doesticks”). Mortimer’s article humanized the hundreds of individuals, couples, and families of the Pierce Butler estate in Georgia, their lives shattered during several infamous days of transaction.  Harper’s poetry had similarly given language to the emotions of black parents, children, siblings, and friends torn from each other and sold away (Christie, “‘With Anguish”).

Black women writing within and in response to nineteenth-century African American newspapers also confronted skeptical male readers and editors. These men held low expectations about the quality of their submissions or disagreed with their positions on suffrage, education, and other privileges.  “If not [their] womanliness,” Teresa C. Zackodnik writes, “at times it was [their] own humanity that was questioned” (137).  In other words, black women often embodied the very vulnerabilities they attempted to expose and redress (137).  Published west of the black-owned Freeman, North Star, and Douglass’ Paper, as Kerri K. Greenidge has observed, The Cleveland Gazette “was often the most blatant in its misogynistic notions of civil rights” (177).  This reality made the Gazette’s publication of writing by the activist Ida B. Wells extraordinary and surprising.

Wells had toured Great Britain between 1893-94 to publicize America’s extralegal racial violence and raise funds to help litigate or legislate an end to these domestic terrors.  She sparred over the issue in the London papers with Georgia’s governor, William J. Northen (1835-1913). He questioned her authority on life in the South and the preponderance of lynching.  Tracing this exchange back across the Atlantic, one seminar student uncovered Wells’s penultimate response, “Her Reply to Gov. Northen and Others,” in the 14 July 1894 Cleveland Gazette.  Wells countered Northen’s white supremacist ideology with legal discourse, ostensibly the exclusive domain of educated white men. Her refutations gained additional traction as other black women activists took up this technique in their anti-lynching writings (Serafini, “Coalition Citizenship”).

These investigations of Mossell, Harper, and Wells exemplify how the Readex African American Newspapers, Series 1 and 2, conveys the breadth of viewpoints that the nineteenth-century black press registered from New York to San Francisco and other locations in between.  These writers advanced the community-building agendas of African American secular and sacred newspapers during the Reconstruction era.  Black newspapers played crucial roles in advertising literacy classes and other educational opportunities, to the extent of printing reading lessons in their pages (Gallichio, “‘Teaching Me’”). When the Washington Bee in 1892 printed an image of the activist Ida B. Wells, signed “Yours for Justice,” it therefore did more than announce her new book against “Southern Mob Rule.” It vocalized one of the paramount objectives of African American newspapers—justice—and it gestured to the crucial role of African American women’s voices in their newsprint crusade.

Christie, Luke D. “‘With Anguish None May Paint or Tell’: Images of Slave Auctions in the Writings of Frances E.W. Harper & Mortimer Neal Thompson.” Unpublished essay.

Priest, Josiah. Slavery, as it Relates to the Negro, or African Race, Examined in the Light of

Circumstances, History and the Holy Scriptures; with an Account of the Origin of the

Black Man's Color, Causes of his State of Servitude and Traces of his Character as well in

Ancient as in Modern Times: with Strictures on Abolitionism. Albany, Printed by C. van

In addition to the students whose works we cite above, we thank these seminar participants for their research: Johanna Bailie, Whitley Carpenter, Jessica Lambert, and Zachary Perdieu.

Michelle-Taylor Sherwin is a doctoral student in English and Instructor of First-Year Composition at the University of Georgia. Her primary research focuses on motherhood and women’s writing in nineteenth- and twentieth-century American literature. In the South Atlantic Review, she has published “The Evolution of Foucault’s Utopic Panopticon: Technology and the Creation of a Dystopia in Big Brother” (vol. 83, no. 2 [Summer 2018], pp. 1-9). Her chapter titled “Mary Chesnut’s Civil War Diary and the Evolution of the Southern Woman” will appear in Through Mama’s Eyes: Unique Perspectives on Southern Matriarchy, edited by Cheylon Woods and Kiwana McClung (University of Louisiana at Lafayette Press, forthcoming Spring 2020).