Finding recent scholarship on 18th- and 19th-century literature poses no great challenge to the skilled researcher, who may use a variety of available tools to support such an inquiry. It can be more difficult, however, to discover contemporaneous responses to significant 18th- and 19th-century authors. One useful tool for that type of search is the digital Archive of Americana. With a bit of strategic searching, students can discover a wealth of book reviews and other responses to classic American literature within the Archive, especially in America's Historical Newspapers.

American Broadsides and Ephemera and both series of Early American Imprints all include "Book Reviews" as a genre. However, only a few items are identified as belonging to this genre—four in American Broadsides and Ephemera and one each in Series I: Evans and Series II: Shaw-Shoemaker. These varied items range from a compilation of critical responses to The Life and Labors of David Livingstone included in the Hubbard Bros.' exclamatory prospectus ("A BOOK OF MATCHLESS INTEREST! WITHOUT A PEER!! MAGNIFICENTLY ILLUSTRATED!!!") 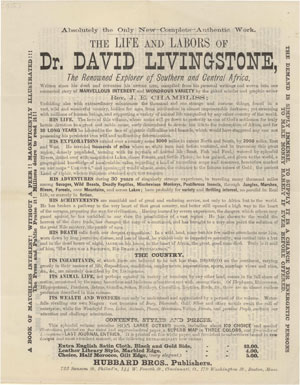 to John Quincy Adams' "rather political than literary" American Principles: A Review of Works by Fisher Ames.

Researchers, however, will find the majority of the Archive's book reviews in America's Historical Newspapers. In both advertisements and editorial content, several newspapers either contain or refer to book reviews from many diverse sources. A preliminary search for the phrase "Uncle Tom's Cabin," yields over 1,100 results. (Neglecting to enclose the title in quotation marks increases the number to over 1,300, highlighting the importance of remembering to specify exact phrases when searching for book titles.)

Of course, a strong reaction in the press is to be expected of a book of the profound political and social importance of Uncle Tom's Cabin, but the Archive can also serve as a source of critical reactions to works of authors considerably less controversial than Harriet Beecher Stowe. To pick just a few American writers as examples, simple full-text phrase searches uncover 89 results for Louisa May Alcott, about 360 for Herman Melville, 700 for Edward Bellamy, 1,300 for Stephen Crane and over 3,400 for Walt Whitman—to say nothing of 22,000 for Mark Twain. For a researcher interested in finding contemporaneous reviews of significant authors, the challenge lies in an embarrassment of riches. How, then, to focus one's investigation?

Most simply, researchers will often be best served by deciding which titles are of interest and searching for them individually, instead of looking only for their authors' names. Although researchers interested in several of a particular author's works may need to perform multiple searches, this approach has the advantage of tending to exclude both results about titles of lesser interest and those that concentrate on details of the author's life, instead of her works. Adding "Little Women" to the previous search for "Louisa May Alcott" with the AND operator (as well as enclosing both search terms in quotation marks), reduces the number of results by about 70% and eliminates, among other things, a few obituaries and a reference to the author's house.

For even better results, researchers should consider limiting searches to the dates from which reviews would be most useful. References to Walt Whitman's Leaves of Grass, for instance, begin to appear in the Archive about one year after its initial publication, with a small but prescient advertisement in the New York Herald that promises, "[t]his book will always be in demand."

References to Leaves of Grass continue to appear throughout the years covered by the Archive, until 1922, thirty years past Whitman's death. What portion of that substantial range is considered relevant depends on the needs of the individual researcher. If, for example, a student is interested only in reviews that closely followed the book's original 1855 publication, then a search limited to no more than five years beyond that date should be sufficient. A search for "Leaves of Grass" between the years 1855 and 1860 yields a manageable six records (including Mrs. Juliette H. Beach's "candid opinion that 'he certainly has not soul enough to be saved; I hardly think he has enough to be damned'.")

In searches for some titles, however, these two basic strategies will still yield too many results for the researcher to easily separate book reviews from other mentions. Obviously, not every result that refers to the title of a book contains a review of it. In these cases, the researcher should consider what sorts of documents may be helpful and modify his search accordingly. For instance, there are 118 results for "Huckleberry Finn" dated between 1884 and 1888. Of those, 90 are advertisements, the majority of which simply announce a bookseller's pleasure to make the book available. Such ads can be disregarded in favor of the 27 articles identified as news/opinion.

However, the search strategy of entirely excluding advertisements is not recommended for works that may not have received as much editorial attention as The Adventures of Huckleberry Finn or Uncle Tom's Cabin. On occasion, one will find an advertisement that refers to or quotes from a title's critical reception. Ads for literary periodicals can be especially valuable for this purpose, because they often provide a hint about the contents of recent issues.

Therefore, the researcher should be cautious about excluding all advertisements out of hand, as they sometimes can be valuable citation sources. Fortunately, sorting through a large number of advertisements is often a quicker process than one may initially suppose. Multiple results for ads appearing in a single newspaper within a limited timeframe usually indicate that the same ad was run in several issues over the course of days or weeks, not that each represents a unique document. As an example, the 32 ads for Huckleberry Finn in the Trenton State Gazette between October and December 1884 need not be studied individually. 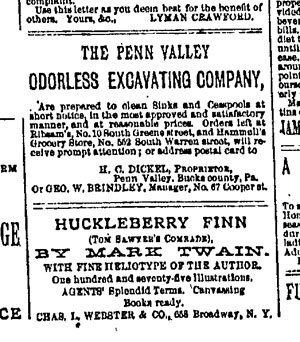 Finally, researchers should be cautioned against attempting to find book reviews by the intuitive method of adding the word "review" or a variant to their searches. That method excludes too many excellent sources. Determining which items that mention particular books qualify as reviews is better left to the critical judgment of the researcher than to the unreliable inclusion of that particular word.

Examining the critical reception a literary work received in its own time can only help researchers better appreciate its history. With judicious searching, students can make the Archive of Americana a valuable tool in deepening their understanding of the most important works of American literature published between the 18th and the early 20th century.