In 1724, Anthony Lamb had nearly served out his apprenticeship to a maker of mathematical instruments in London when he fell in with some bad company at a local pub. Eager to impress his new comrades, Lamb aided them in the robbery of a boarder in his master’s house one night by leaving the front door unlocked. Lamb’s associates ransacked the boarder’s room and took a considerable sum of money and expensive clothing. The robbers and the stolen goods were never recovered, but suspicion immediately fell on Lamb, who confessed his role. Lamb was brought to trial at the Old Bailey and was sentenced to transportation to the American colonies for a seven-year term.

Lamb was one of over 50,000 convicts who were transported to America by Great Britain beginning in 1718 and ending abruptly in 1776 with the American Revolution. Most of the convicts ended up in Maryland or Virginia (not Georgia, as is commonly believed). Despite the large number of convicts who were shipped across the Atlantic, finding information about them can be a challenge. Most of the convicts were illiterate, and many of them tried to hide their criminal past by changing their names and moving away after serving out their terms. The historian has to do some real digging to fill in the lives of these little-known men and women, and Readex’s Early American Newspapers is a tremendous help in this regard.

Eighteenth-century American newspapers often carried announcements of convict ships leaving Great Britain and arriving in America with prisoners for sale as servants. Newspapers ran numerous advertisements for runaway convicts that describe in detail their clothing and bodily marks—faces pitted from small pox being a common characteristic. Sometimes the ads indicate their skills or behavioral tendencies, such as “addicted to boasting and telling of lies,” “loves liquor” or has “a very remarkable way of staring any body in the face that speaks to him.” Sometimes convict servants are described wearing an iron collar or handcuffs, and many times they escaped in pairs or in groups, occasionally in the company of an African slave. 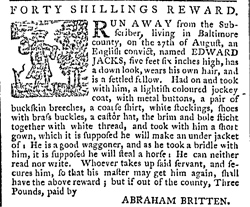 A perusal of articles about transported convicts in Early American Newspapers reveals a notable increase starting in the middle of the 18th-century of crime stories involving transported convicts, as well as editorials complaining about their shipment to America. Benjamin Franklin, in a famous editorial in the Pennsylvania Gazette on May 9, 1751, suggests that America should send rattlesnakes to England as a fair exchange for their convicts. All of these runaway ads, crime stories, and editorials provide important insights into both how convicts experienced life and what colonists thought of them once they arrived in America. 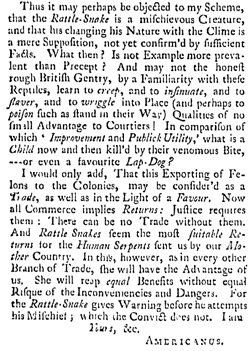 One of the robbers that Anthony Lamb helped on that fateful night in London was Jack Sheppard, who soon afterward became a media sensation both in England and in America after he escaped from the notorious Newgate Prison despite being chained to the floor in its tower. The American Weekly Mercury for December 10, 1724 carried the story of Sheppard’s escape, along with a note that a ship of felons was about to leave port with Sheppard’s brother, Thomas, who was convicted of a separate crime. This very same ship, which was headed to Anne Arundel County in Maryland, also carried Anthony Lamb. 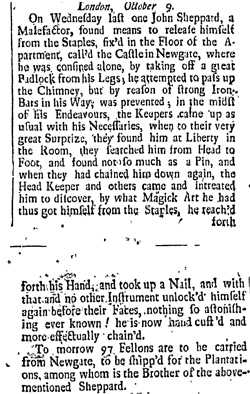 Unfortunately, Lamb’s life in Maryland goes dark at this point, because the county court records that would have recorded his fate have since disappeared. However, Lamb later surfaces in New York City, running a highly successful business selling mathematical instruments, such as compasses, quadrants, protractors and scales. We know this, because we can find advertisements for his business in the New York Gazette, New-York Mercury and Connecticut Journal.

Lamb also placed an advertisement for a runaway slave in the New-York Mercury on April 30, 1753, which is believed to be the first to use an illustration of a runaway slave.

Databases like Early American Newspapers are making it much easier to write about the social history of groups that have been neglected for want of cohesive sets of research materials. They allow researchers to piece together the movement and activities of relatively obscure individuals and to discover connections among them that are not immediately apparent. Anthony Lamb died in December 1784, and many newspapers throughout northeast America carried his obituary. 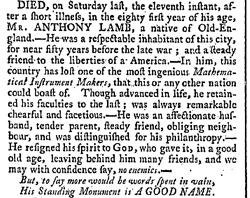 He was described as a “respectable inhabitant” of the city and “a steady friend to the liberties of America.” None of the articles, however, mentioned the circumstances that brought him to America.