Representative Alexander Hamilton Stephens, 1812-1883, and U.S. Senate Librarian, Alonzo Webster Church, 1829-1909, though on different sides of the aisle and separated by almost two decades in age, had at least one thing in common besides being Southerners, Georgia natives, and graduates of the University of Georgia: a deeply held concern about the indexing of and access to U.S. Congressional publications.

In the Jan. 19, 1880 report "Indexing the Publications of Congress" (H.Rpt. 128, 46th Congress, 2nd Session), Stephens noted that his recent reports from the Committee on Rules have "had the effect of calling the attention of members to the real nature and importance of index-making…and developed an appreciation of the fact that the want of a proper system of indexing has detracted very greatly from their value and use." He then went on to say "the application of a uniform system of indexing, based on well-established principles, would enable the compilation of general indexes at stated periods hereafter a matter of very little trouble and expense."

Stephens also focused on the practices, current at that time, of indexing the Congressional Record, which were making access to the Record far from easy. He quoted one index entry which begins "That the rules of the Last House of Representatives shall be the rules of this House until otherwise ordered, with the following amendments thereto; namely: Rule 76 shall be amended so as to read as follows…" and then the entry goes on for another 660 words making a total entry of 690 words. From that exaggerated case Stephens drew the conclusion: "Measured by the standard of Sir Henry Thring, that 'an index is perfect in proportion as it is concise in expression,' we doubt if a more extreme example of what an index entry should not be can be found in the history of index-making since the art of printing has been practiced."

Twenty-seven years after that Stephens report, Alonzo W. Church—Senate Librarian from 1883 to 1904—published as Senate Doc. 103 (54th Congress, 2nd Session) "Important serial documents published by the government and how to find them." In his preface, Church outlined the purpose of his work which was "to assist those who desire quick and ready reference to the principal documents published by order of Congress. In the course of my duties as Librarian of the Senate I have found some such aid to be absolutely essential in order to enable me to supply on short notice such documents needed for use in debate, and I long since prepared most of the subject matter of this list."

It is an excellent handbook which is still today consulted by Senate Library staff and others. Here is a sample of his entry for French spoliations: 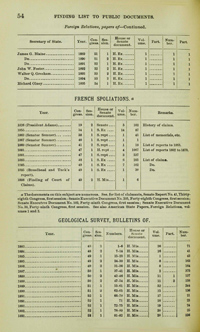 As an undergraduate at the University of Georgia, where his father was chancellor, Church had belonged to an undergraduate society called the Temple of the Skull and Bones of the Mystical Seven, in which he was known as Godolphin Grasshopper.

In today's world, we no longer have 690-word index entries so decried by Representative Stephens, and although the Church volume, like his other bibliographic publications, is still useful, one can now turn to the wonders of full-text searching for the American State Papers, the Serial Set through 1980 and from 1994 until today. Like a grasshopper, a latter day Godolphin or other, one can hop through millions of pages of text, supported in many cases by human indexing of the kind espoused by Stephens, in a matter of seconds or less. Stephens and Church, were they able to see this, would surely be delighted. No more skull and bones searching by the necromancy of the mystical seven.