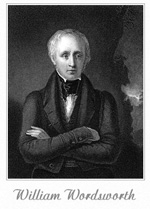 In The Prelude, English poet William Wordsworth—who spent extended time in France during the 1790s—recounted his enthrallment with the French Revolution. "Bliss was it in that dawn to be alive," reads a passage from Book Ten. "But to be young was very heaven! O times . . . When Reason seemed the most to assert her rights/ When most intent on making of herself/ A prime enchanter to assist the work/ Which then was going forwards in her name."1 As these famous lines make clear, The Prelude's power stems in large part from the way in which it evokes the experience of living through the French Revolution. During the Age of Enlightenment, "Reason" inevitably shaped the articulation of "rights." Yet the meaning of Gallic political upheaval cannot be fully understood without examining the emotional journey of those who lived through the 1790s. For sympathetic observers like Wordsworth, that journey encompassed an incredible sense of rapture, and the author frequently likened support of the French Revolution to an intense love affair.

A close reading of The Prelude suggests that millennial time occupied a critical role in this political infatuation. The passage cited above alludes to the opening of a new day in history, and it is for that very reason that the author experienced "Bliss." Wordsworth further highlighted his acute consciousness of divine temporality by repeating the word "When." These were not ordinary days; these were sacred days "When" momentous "events/ Of that great change" stirred imaginations.2 In the end, the historic days—and the feelings of youthful infatuation associated with them—did not last. The "Bliss[ful] . . . dawn" gave way to the uncomfortable reality of a stormy afternoon (the Reign of Terror), which in turn gave way to the sober equilibrium of night (the end of the Reign of Terror). Wordsworth may have been captivated initially by the French Revolution, but he wrote his poetic masterpiece as someone changed by the passage of time, as a mature adult reflecting—nostalgically and remorsefully—on the unreliable, dangerous caprices of youth.

The Prelude's depiction of revolutionary time was enriched by Wordsworth's treatment of the way in which individuals in the 1790s received news about the French Revolution. In an era before the internet, televisions, radios, telephones and telegraphs, most people gathered intelligence by word of mouth, letters and newspapers. The latter medium was relatively new—the earliest newspaper was founded in Britain in the mid-seventeenth century—but it nonetheless occupied an increasingly important role in the dissemination of information. In fact, during the headiest days of the French Revolution, the distribution of newspaper intelligence functioned as a noteworthy event in and of itself. "At the hour,/ The most important of each day, in which/ The public news was read," wrote Wordsworth, "the fever came,/ A punctual visitant, to shake" the audience that listened to reports of political "earthquakes, shocks repeated day by day."3 As the author made clear, the public reading of news powerfully and repeatedly jolted people's assumptions. It is one thing to receive significant intelligence once or twice a year. But for those living through the French Revolution, momentous news became a common occurrence in a manner that was both exhilarating and exhausting. It was invigorating in the sense that it gave people the impression that time had accelerated, that positive political developments that would normally take decades to materialize had miraculously sprung forth in a year, a month or even a day. At the same time, the daily unfolding of earth-shattering events was grueling because news was not always good, nor was it necessarily reliable. As Wordsworth put it, there were "emotions wrought/ Within our minds by the ever-varying wind/ Of record and report which day by day/ Swept over us." 4 The diffusion of news through newspapers thus concentrated and exacerbated the intense temporal experience of egalitarian revolution.

At first glance, The Prelude's representation of time and newspapers might appear to be the product of poetic license. It might also seem peculiar to those who witnessed French Revolutionary events firsthand. Yet, as I learned while conducting research on the American 1790s, Wordsworth's words reflected a real-life, transnational phenomenon. Many residents of the United States, it turns out, eagerly interpreted the French Revolution as the harbinger of a new era, and they likewise testified to the way in which newspapers intensified their experiences with revolutionary time. 5 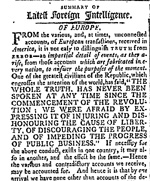 This evidentiary discovery quite naturally led to an interpretive concern. Even if residents of the United States anticipated or echoed particular poetic utterances of Wordsworth, was there anything that differentiated popular American engagement with time during the French Revolution from the temporal experiences of those who lived through the American Revolution? To answer this question, I turned to America's Historical Newspapers. This database enabled me not only to conduct key word searches, but also to chart the usage of certain words in particular sets of years. The targeted searches revealed that Americans between 1793 and 1795 used various phrases associated with the millennium and news much more frequently than did their forerunners in two other periods known for their links to golden-age ideas (1774-1777 and 1787-1789). Indeed, even when taking into account the increase in the number of newspapers between the 1770s and 1790s, it is clear that the temporal experiences of the French Revolutionary era were much more intense than those of the preceding two decades.6 The anecdotal evidence I had accumulated was thus reinforced by hard numbers. Thanks to Readex, one specific aspect of late eighteenth-century Americans' experiences with time was eminently quantifiable.

America's Historical Newspapers also helped me solve a methodological problem related to newspapers themselves. Because eighteenth-century public prints frequently featured anonymous commentary, important historical phenomena can sometimes appear to be the product of disembodied forces rather than the collective result of thousands of individuals' actions. As I began the process of writing about American engagement with French Revolutionary time, I accordingly decided to bring into relief a representative historical figure. Although I made this determination quite late in the scholarly process—long after I had taken my initial (and as it turned out, insufficient) notes—the existence of America's Historical Newspapers made the additional research not only possible but utterly efficient. More specifically, I utilized the database to hone in on Boston Columbian Centinel editor Benjamin Russell, whose opinions about time and newspapers were quite striking. The result of this second round of research was an entirely new section devoted to the ways in which Russell's attempts to balance a hunger for contemporaneity with a desire for accuracy effectively introduced modern notions of contingency. 7

My experiences have thus convinced me of the inestimable value of America's Historical Newspapers. Indeed, without this database, it would have been impossible to recover and depict the dramatic impact the French Revolution had on popular American understandings of time. The raw evidence and search tools provided by Readex furthermore hold great promise for future scholarly inquiries. Whether it is comparing word usage across time, pinpointing the words of a particular newspaper or individual, or utilizing the database in another, as-yet-unknown mode, the opportunities appear limitless. In that sense, it might not be entirely foolish for the American historian today to assume a Wordsworthian pose and declare, "Bliss was it in that dawn to be alive."

Matthew Rainbow Hale is an assistant professor of history at Goucher College in Baltimore, Maryland. The University of Virginia Press will publish his forthcoming study of the French Revolution’s impact on American political culture.