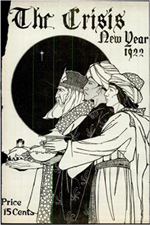 Historical anniversaries provide occasion to remember, to reflect, and to create meaning. The controversy surrounding the 1994 Enola Gay exhibit and the memory of World War II offers a case in point. Current debates about September 11 memorials, museums, and mosques in New York City serve as others. The National Association for the Advancement of Colored People (NAACP) celebrated its centennial in 2009, only months after America’s first black president Barack Obama was sworn in. The NAACP’s official magazine, The Crisis, turned 100 in November 2010 and thus provides an occasion to remember and to reflect.1

Still in print, The Crisis represents the struggle, the ingenuity, and the fruit of its founder W.E.B. Du Bois (1868-1963). Du Bois spent nearly twenty-five of his ninety-five years as its editor (1910-1934). Throughout his autobiographical writings Du Bois proudly reflected on this achievement. In Dusk of Dawn (1940), for example, Du Bois maintained that through the work of the NAACP and The Crisis he could “place consistently and continuously before the country a clear-cut statement of the legitimate aims of the American Negro and the facts concerning his condition.” In his 1968 Autobiography, published posthumously, Du Bois remembered that “With The Crisis, I essayed a new role of interpreting to the world the hindrances and aspirations of American Negroes.” 2 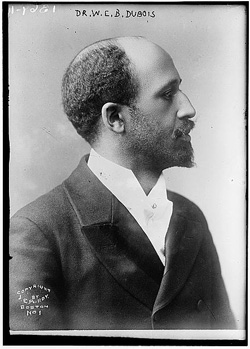 One hundred years after its genesis, The Crisis remains a virtually untapped archive for studying America. This national magazine—not unlike its contemporary competitors, Opportunity, the National Urban League’s organ (founded in 1923), and The Messenger, the Brotherhood of Sleeping Car Porters’ publication (founded in 1917)—can tell us a tremendous amount about early twentieth-century American religious history. Conversant with the complex contours of American religious culture (and more specifically Protestant Christianity), in The Crisis Du Bois sometimes used religious language to address political (in)equality, while at other times he commented on the intersection of religion and public life. Du Bois also revealed his creative hand by commissioning noted Harlem Renaissance era artists to create religiously themed images to grace the magazine’s cover. Ultimately, studying Du Bois, religion and The Crisis during his editorship shows how religion not only helped to forge identity in a society that denied personhood to people of African descent, but also fueled the long civil rights movement of the twentieth century. 3

Religion in The Crisis
When Du Bois became editor of The Crisis in 1910, he wasted little time registering religious reflections on its pages. An early editorial displays how Du Bois used the holiday season and religion as a way to reflect on the political realities of early twentieth-century America. In December 1910, in the magazine’s second issue, Du Bois focused on the ethical imperatives of Jesus’ teachings. “This is the month of the Christ Child,” Du Bois began, “when there was reborn in men the idea of doing to their neighbors that which they would wish done to themselves.” Christmas, for Du Bois, was not occasion to reflect on the wonder of the Incarnation as a theological concept, but on its manifestation in the world, what he called “a divine idea—a veritable Son of God.” Du Bois ended this December editorial with a political plea voiced as a prayer: “God grant that on some Christmas day our nation and all others will plant themselves on this one platform: Equal justice and equal opportunity for all races.” This early column represents Du Bois’s use of religious ideas to offer commentary on the American political order. Moreover, the moral dimensions of his language, emblematic of the Progressive Era in which he wrote, serve as a witness to Du Bois’s biblical understanding that sometimes struck a chord with his readers.4

And readers took notice of the ways that Du Bois engaged religion in The Crisis. Two rich examples surfaced in the early 1930s when in April 1931 New Yorker J.J. Mulholland wrote: “Remove my name from your mailing list. I am still interested in the movement but not in the atheism of Du Bois. This continual flaunting of his atheism has made THE CRISIS a menace to a Christian home, black or white.” It appears Du Bois’s criticism of religion and the color line led some to assume his searing voice signaled hostility toward faith. Two months later, in the June 1931 edition of The Crisis, Mabel S. Levine of South Dakota responded with this letter: “Continue my name on your mailing list indefinitely. I am interested in the movement and also in the ‘atheism’ of Dr. Du Bois. The continual diffusion of his liberal spirit is making THE CRISIS a blessing to every home, black or white.” 5

What was it in The Crisis that raised the ire of Mulholland? What inspired Levine to weigh in positively about the question of Du Bois’s religious faith (or lack thereof)? Neither Mulholland nor Levine singled out an article or column, but their comments suggest clearly that the NAACP’s magazine had considerable religious content. And just what did Mulholland and Levine find in The Crisis? They would have read reports about the African Methodist Episcopal Church or reflections on the state of the black church by ministers and denominational leaders. Mulholland and Levine would also have read the consistent, critical attention Du Bois gave to clergy. In April and December issues—numbers that coincided with Easter and Christmas—they would have poured through nearly twenty spiritual short stories Du Bois wrote for The Crisis, fictional accounts imagining a Black Christ visiting twentieth-century America, mingling with struggling laborers from the Southern working-class, or preaching to city dwellers suffering from urban manifestations of Jim Crow. In one story Du Bois set the birth of Christ in Africa. 6

“The Sermon in the Cradle,” published in the December 1921 issue, represents Du Bois’s most unique spiritual short story. It retold the story of Jesus’ birth as if it happened under European colonial rule in Benin. Du Bois rewrote the Nativity prophecy of the Hebrew prophet Isaiah: “And thou Benin, in the land of Nigeria, art not the least among the princes of Africa: for out of thee shall come a Governor, that shall rule my Negro people.” Those who visited the African Christ worshiped and presented gifts—“gold and medicine and perfume”—presents with symbolic significance and practical value for tropical Africa. Eventually the Christ child broke into a sermon as Du Bois reconfigured Jesus’ Sermon on the Mount: “Blessed are the poor folks for they shall go to heaven,” preached the African Christ, “Blessed are they that submit to hurts for they shall sometime own the world. . .Blessed are those who do not seek revenge for vengeance will not seek them. . . Blessed are you, Black Folk, when men make fun of you and mob you and lie about you. Never mind and be glad for your day will surely come. Always the world has ridiculed its better souls.” By the time he wrote “The Sermon in the Cradle,” Du Bois had organized two Pan African Congresses (1919 and 1921), international meetings held at a time America emerged as a global power. It is also significant that Du Bois chose the story and teachings of Jesus as one way to creatively narrate these larger global concerns. Finally, Du Bois’s reformulation of a popular New Testament passage Crisis readers would have recognized highlighted an explicit focus on the ethical dimensions of Jesus’ teaching, a perspective important to understanding the social gospel of early twentieth-century American Protestantism. 7

Conclusion
The centennial of The Crisis calls our attention to its understudied role in twentieth-century American history. In turn, commemorative reflection invites students of history to explore Du Bois’s analysis of the black church, for example, and observe how he creatively gave readers a black Christ with whom they could find common ground. Finally, investigating religion and The Crisis at the dawn of the twenty-first century reminds us that religious ideas, religious language, and religious identity are historically contingent, culturally constructed, and endlessly fascinating.

Phillip Luke Sinitiere is the Scholar in Residence at the W.E.B. Du Bois Center at UMass Amherst. He also teaches history and humanities at the College of Biblical Studies, a predominately African American school located in Houston’s Mahatma Gandhi District. Sinitiere is a scholar of American religious history and African American studies. His recent books are Protest and Propaganda: W. E. B. Du Bois, The Crisis, and American History (University of Missouri Press, 2014), Salvation with a Smile: Joel Osteen, Lakewood Church, and American Christianity (NYU Press, 2015), and Citizen of the World: The Late Career and Legacy of W. E. B. Du Bois (Northwestern University Press, 2019). Sinitiere’s Du Bois scholarship addresses the topics of religion, literature, historical memory, Pan-Africanism, journalism, socialism, anticommunism, and peace.