Digging Up Crime Stories from America's Past: Tips and Technique from a Librarian-Scholar
Anthony Vaver

Student Scholars: Using Early American Imprints to Introduce Students to the Era and to the Field
Julie R. Voss

The American Peregrinations of a Blockhead Mummy: A Not So Eternal Rest
S.J. Wolfe 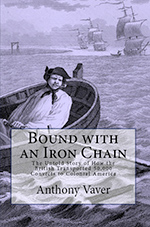 As a librarian, I love to recommend the perfect Boolean search phrase to unearth the exact documents wanted, but as a writer who digs up stories from America’s criminal past, I generally find myself using simple search phrases. This search strategy, however, does not mean that I conduct simple searches.

In seeking primary source material, I inevitably find myself trying to answer one or a combination of four basic questions: who? what? where? and when? (“how” and “why” are more the province of secondary sources). By combining these basic questions with knowledge of the peculiarities of how information in eighteenth-century America was published and distributed, I have a better chance of finding the information I need.

Who? In writing about crime in early America, I am interested in the lives of criminals, especially if they have a compelling story to tell. But early American sources can be frustrating in their lack of detail. The Boston News-Letter reports that in New York on June 9, 1718, “Three men are condemned here for Burglary and Felony and are to be Executed on Saturday next.” That is all. No names. No details. I can waste a lot of time in an attempt to track down more news reports about this execution, but I will find no more information than what is offered in this one newspaper.

In order to discover documents that provide in-depth portraits of criminals and their crimes more efficiently—as well as to gain a general picture of the early American crime scene—I turn to the index in America’s Historical Imprints. Under “Subjects: Law and Crime,” I essentially find a map of early American crime, with categories like African-American Criminals, Drunkenness, Thieves, and Pirates. And because the broadsides, pamphlets, and books linked within these categories generally include lots of detail, I can quickly identify the criminals who became media sensations and would make good subjects for my writing. 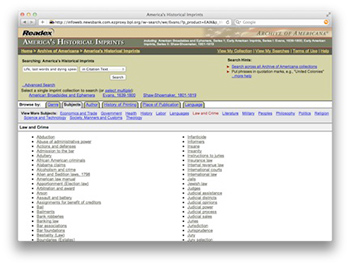 What? Armed with a broadside or two about a criminal, I can then return to America’s Historical Newspapers and try to fill out the “what” of the story even more. Newspaper articles can add rich detail, corroborate information in the broadside or pamphlet, or present a competing account of events. But finding more information about the criminal in America’s Historical Newspapers is not necessarily a straight-forward process.

Newspaper reports about a particular crime not only can be terse, but small in number. Even though America’s Historical Newspapers contains a vast collection of early newspapers, the further back in time I go in my research, the fewer newspapers existed, which means that I need to lower my expectations for the amount of material I can expect to find. In many ways, I envy my nineteenth-century colleagues who have a much larger set of criminal records at their disposal.

Simply plugging a criminal’s name into America’s Historical Newspapers may not give me the results I need either. In 1785, Pastor Peres Fobes published his sermon, The Paradise of God Opened to a Penitent Thief, which he delivered at the execution of “John Dixson.” But if I entered the executed’s name into America’s Historical Newspapers, I would not find any articles about him, because in newspapers his name appeared as “Dixon.” 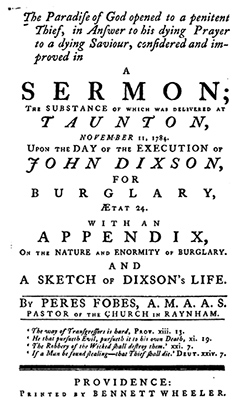 Many of the criminals I write about were illiterate. When they dictated their “Life and Confessions” to a minister so that their stories could be published and sold at their execution, variant spellings of their names sometimes appeared. With sound rather than written convention guiding spelling, the simple transcription of a criminal’s name can easily lead to dead-end searches. I try to counteract this problem by keeping track of the variant spellings and aliases I find in documents, constructing my own variant spellings of a name based on sound, and using the wildcard function in my searches. Place-names are not immune to variant spellings or variant references either: did the newspaper article refer to Old Newgate Prison, New-Gate Prison, or New Gate Prison—or did it use Jail or Gaol instead of Prison?

Where? Today, we often turn to the newspaper of record closest to an event in the logical belief that its coverage will have more depth than newspapers published further away. So instinct might tell us that when we want to find information about Stephen Smith’s execution on October 12, 1797 on the Boston Common we should limit our search to local newspapers. But early American newspapers printed or reprinted stories from all over colonial America, and the hometown newspaper is not always the best source of information. Some of the stories that appeared in another city’s newspaper contained more detail due to space issues or editorial decisions, not to mention the possibility that the issue that originally reported the story is no longer extant. 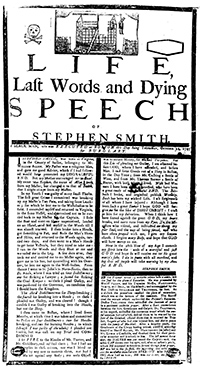 In the case of Stephen Smith, only one Boston newspaper, the Columbian Centinel, carried a description of his execution, and the Boston Gazette only carried a one-sentence announcement. But newspapers from Connecticut, New York, Maryland, New Jersey, and Pennsylvania all provided in-depth coverage of this Massachusetts story. And only the New Hampshire Gazette added the detail, “In the fore part of the day, several Culprits, convicted of inferior crimes, received the discipline of the Post,” which helps fill in the picture of the entire execution day.

When? In our current media-saturated society, we have become accustomed to receiving news of an event as soon as it happens. But in early America, news traveled slowly. The reporting of a crime or trial could be delayed by as much as a few weeks or even several months. Some sources may even report the wrong date of an event, either due to human error or to the acceleration or delay of, say, an execution. So when I limit my search by time period, I always make sure that I under- and overshoot the date when an event took place to make sure I catch the articles I want.

Searching databases for early American primary source material involves a lot of trial and error. Yet despite my best efforts, I still find references in bibliographies to sources that I missed during my initial searches. But if I keep in mind the basic frameworks of my search and understand the limitations of the information that I am working with, I can make my searching more productive and avoid some of its potential pitfalls.