The Life and Times of Frederick Douglass in Anacostia (Washington, D.C.) as told in the Washington Evening Star
John Muller

author of Frederick Douglass in Washington, D.C.: The Lion of Anacostia

When Benjamin Franklin Came Home: A Look at the Media Coverage of His Return
Michael D. Hattem

Verses from Beyond the Grave
Robert Wilhelm

Thomas W. Piper was executed in Boston on May 26, 1876, concluding one of the city’s most sensational murder cases—the murder of five-year-old Mabel Young in the belfry of the Warren Avenue Baptist Church. It was the sort of dramatic story that had always inspired the poetry of Byron DeWolfe, who penned ballads on several New England murders. But DeWolfe died in 1873, two years before Mabel Young’s murder was committed, so it came as a bit of a shock when a poem written by Byron DeWolfe entitled “Verses Composed on the Confession and Execution of Thomas W. Piper, The Convicted Belfry Murderer” was published after the execution.

George Gordon Byron DeWolfe was known as “The Wandering Poet of New Hampshire.” Though he was born in Nova Scotia and spent much of his time traveling from state to state, DeWolfe called Nashua, New Hampshire, home. He wrote topical poetry about contemporary events and there was no subject too big or too small for Byron DeWolfe. His poems, printed in Boston as one-page broadsides and sold to the public, commemorated everything from a New Hampshire clambake to the assassination of President Lincoln. DeWolfe was also known as the “Steam-machine Poet” for the rapidity with which he wrote. Sometimes he would include the time it took to write the poem as all or part of the title, for example, “Verses, Given in Twenty Minutes,” and “The Great Eastern’s Coming. Composed in Forty-three Minutes.” 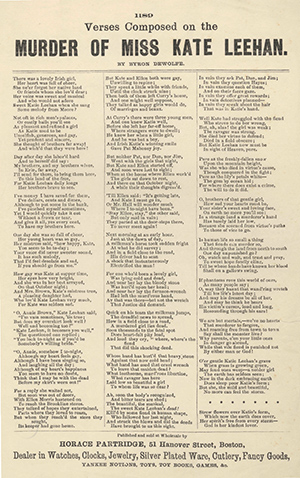 One of the last poems written by Byron DeWolfe was “Verses Composed on the Murder of Miss Kate Leehan” about the brutal murder in Boston of a young Irish immigrant. It is very likely that DeWolfe would have written about Mabel Young’s murder as well, had he been alive when it happened, but how had he been able to write “Verses Composed on the Confession and Execution of Thomas W. Piper, The Convicted Belfry Murderer” after his death? In a column down the middle of the printed broadside, between two columns of verse, was the answer:

A FEW WORDS TO THE READER

The public will doubtless remember the wandering Poet Byron DeWolfe of Nashua, N. H., who passed away some five years ago of congestion of the lungs; he still seems to feel his presence needed here in regard to composing Poetry on various subjects, as he was in the habit of Doing while here on this earth and has selected the medium Miss Lillie as the most reliable and powerful medium to control. I wish it to be distinctly understood that these verses were composed by me Byron DeWolfe, through the mediumship of Miss Lillie, the Physical and test medium in about 2 hours and a half. Parties wishing to consult the medium will find her one of the best test mediums the world can produce; she is an independent medium. Her present place of business is 35 Hanover St., where she can be seen and consulted.

In reading “Verses Composed on the Confession and Execution of Thomas W. Piper, The Convicted Belfry Murderer,” it does not take a poetry expert to tell that in death the Wandering Poet had lost his chops. The Kate Leehan poem explores the character and thoughts of the victim, but the Thomas Piper poem is little more than a rhyming recitation of facts. One verse is lifted verbatim, but for the name, from the Kate Leehan poem:

Strew flowers over Mabel’s [Kate’s] form,
Which now the earth does cover.
Her spirit’s free from every harm!
God is her kindest lover!

And nothing in the Kate Leehan poem approaches the awkwardness of this verse from “Thomas W. Piper:”

Sleep, mangled form, in the cold earth be sleeping;
Rest, gentle spirit, in sunshine and love;
Mother afflicted, O, answer though weeping,
Don’t Mabel now wait for your coming, above?

DeWolf’s medium, Miss Lillie, was probably Miss Lillie Darling who advertised in the Boston Herald classifieds under the heading, “Clairvoyants &c.” She was a “test medium” meaning that she was able to communicate with spirits on subjects known only to the deceased and the questioner. She was also a stage performer. In May 1875 she advertised a performance in Salem, Massachusetts, promising “Startling Manifestations,” including the raising of a piano by spirit power, instruments played while she is bound, spirit flowers brought, and materialization of spiritual forms, faces and hands. 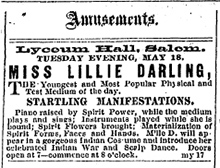 A reviewer for the Salem Register was not impressed by Miss Lillie’s show. The exhibition he said, “…did not give perfect satisfaction to anybody.” The crowd was too small to please the management and the performance did not live up to the advertisements. Apparently the piano raising was not visible to the audience. “There were some cabinet manifestations that were pretty clever, but as a whole the exhibition was a failure.”

In July 1875, Miss Lillie appeared in a public séance held at the Boston Theatre featuring several mediums, who, it was alleged, were preparing to appear before a scientific commission at St. Petersburg, Russia. The audience was made up of at least as many skeptics as believers and when Miss Lillie appeared on stage she could not be heard over the boos and catcalls.

The performance prompted a response from Madam H. P. Blavatsky and Col. Henry S. Olcott, spiritualists and representatives of the Academy of Sciences attached to the Imperial University of St. Petersburg. In a scathing letter to the Boston press, Madam Blavatsky and Col. Olcott included a list of mediums who definitely had not been selected to display their powers in Russia. The list included Miss Lillie Darling. “The Imperial University of St. Petersburg makes its investigation in the interest of science,” they said, “not to assist charlatans to give juggling performances in theatres, upon the strength of our certificates.”

Apparently the Wandering Poet of New Hampshire was also dissatisfied with Miss Lillie’s medium work. Byron DeWolfe never again used her services and he never again published a poem from beyond the grave.