During the Civil War, enterprising publishers produced small envelopes with patriotic images, views of camp life, battles, portraits and comic illustrations. Both soldiers and their friends and families used these Civil War envelopes to mail letters during the conflict. Although most of these envelopes were printed in Union states, a few were produced in Confederate States, which suffered from not only a shortage of paper, but also a lack of envelope-making machinery.

Engravers such as Charles Magnus created envelopes—printed in black, purple or gold ink and then carefully hand-colored—that provided vibrant images of soldiers' life during the conflict. These vignettes of camp life and battles allowed the people at home to be a part of what was happening with their loved ones so far away. News could come quickly by telegraph, but visual images of the war were few and far between. Magnus was also famous for his camp scenes taken from photographs, such as "Camp scene from photograph. 16," which showed a sailor, a Zouave and soldier standing next to four other soldiers sitting in front of a tent.

Civil war envelopes used a range of patriotic images, including eagles, Lady Liberty, cannons, drums, the United States flag, ships, soldiers and portraits of the president and his generals. Many of these were printed in red and blue ink. In an attempt to link the current struggle with the noble cause of Independence, George Washington and Revolutionary-era soldiers also appeared in illustrations.

Various views of Abraham Lincoln were popular; a series of cartoons portrayed Lincoln as a prizefighter against the South, and another depicted him as a star-spangled comet. A plethora of envelopes appeared after the death of war-hero Elmer Ellsworth, with portraits and fictional depictions of his last moments as well as quotations from the fallen martyr. One example of this is an envelope with a portrait of Ellsworth between two flags. It has the caption "Col. Ellsworth, the martyr. Cherish the consolation that I was engaged in the performance of a sacred duty."

Rebels and Southern sympathizers were often portrayed on Civil War envelopes as drunkards, or as slovenly, ignorant and bestial. Jefferson Davis and the Southern commanders were shown hanging from gibbets or depicted as jackasses, dogs and dead chickens. Slaves and contraband (slaves who escaped from their masters and fled to the Northern army before emancipation) were drawn in minstrelesque fashion, as semi-comic figures along the lines of Jim Crow, dancing and making sarcastic observations in what the publishers thought was "authentic darkey dialogue." Slavery as a whole was firmly castigated and denounced; whips, chains and other accoutrements of inhumanity were depicted as being in common use by masters on Southern plantations. 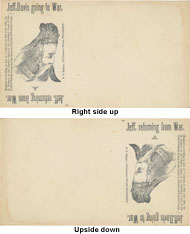 Metamorphic images, in which the view changes as the picture is rotated, also made their appearance on Civil War envelopes. Often the captions are wordplay upon the pictures. One envelope, held upright, presents a man in a hat with beard and moustache. Its caption reads, "Jeff. Davis going to war." Held upside down, the caption reads, "Jeff. returning from war an…" and the flipped image fills in here for the word "ass."

Women were depicted as sweethearts, wives or mothers, often at poignant leave-takings or sewing for the soldiers. The virtues of women doing patriotic duty as nurses were extolled and, of course, Lady Liberty appeared in many patriotic scenes, always portrayed as beautiful and heroic.

Many of the envelopes in the American Antiquarian Society's collection are unaddressed and unused. They were sought after as collectors' items, and albums were made especially to hold them, much as one might now collect postal cards. Others are used and can be read to gain fresh insights into this time period.

Students and scholars can search and browse more than 2,300 Civil War envelopes in American Broadsides and Ephemera, Series I, published by Readex in cooperation with the American Antiquarian Society. This unique collection provides a rich resource of information about this crucial era, shedding light on military battles and life, attitudes towards slavery and the South in general, politics and hero-worship and life at home. Civil War envelopes offer invaluable information about both the material culture and the intellectual attitudes of and towards the Civil War, which cannot be duplicated by any other medium.