War of the Dictionaries
Barbara Shaffer

Visiting archives to view old documents can stir strange emotions. Handling manuscripts, the historian sees not only the private words of someone else but even a physical presence: the quiver of an elderly hand, the smudge of a young thumb, the jagged strokes of impatient fingers flying across a page during a few minutes of leisure. Reading old books, likewise, the historian sees not just printed words but also their readers, folding down page corners or arguing in the margins—or, in one case I found, pressing maple leaves in the fashion pages of Harper’s Magazine. This intimacy is unpredictable, like contact with living people.

Digitized sources, on the other hand, are uniquely democratic. They are available to researchers working from far away, and they lower barriers in other ways—allowing a scholar, for example, to quickly search mountains of text for a particular phrase, reducing the advantage of veterans who have spent years studying the same documents. The ease of manipulating digital sources makes it possible to study large subject populations and great periods of time. For this, we owe digital repositories a great debt. But it sometimes can be harder to feel the life in digital sources. They do not necessarily make it easy to understand the text as something fashioned and received by living people.

Fortunately, however, technological power also makes it easier to study the lives of particular individuals, including people who were obscure. It can let scholars discover unexpected sources and follow narrow trails through vast quantities of information. If digitized sources are less tangible, in other words, they can also be more biographical.

I discovered that part of the promise of digital sources when I began researching early African-American writing about national identity. Many of the historical figures I have encountered in the course of that research—both writers and people whose lives intersected with theirs—are difficult to know today. Most of them were relatively anonymous even while they lived. But using tools like America’s Historical Newspapers makes it far easier to understand both them and the world they inhabited.

One invaluable source for understanding black intellectual life in the Early Republic is Freedom’s Journal, the first African-American newspaper. Launched in March 1827 in downtown Manhattan by editors Samuel Cornish and John Russwurm, this newspaper had a deliberately national scope. By 1829, it had “authorized agents” in eleven states as well as in the District of Columbia, Upper Canada, Haiti, and England.[i]

These distribution agents included the legendary black writer David Walker, who lived in Boston. Walker made several appearances in Freedom’s Journal. The first issue reported that he had hosted a meeting in Boston to enlist support for the new publication. Another news story in April 1828 mentioned a public address Walker had delivered, urging his fellow black citizens to read literature and acquire property as a means of fighting oppression. And in December 1828, Freedom’s Journal published a transcript of another address, in which Walker had pleaded for unity and mutual aid among the “sons of Africa” in the United States.[ii] 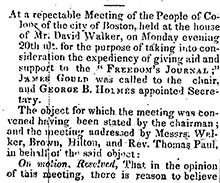 Walker would go on to publish An Appeal to the Coloured Citizens of the World, a militantly nationalistic antislavery pamphlet, the following year. His participation in the work of Freedom’s Journal provides a window into the intellectual process that led to that famous book. By tracing his thinking through these articles, we can see just how closely connected his idea of racial solidarity was with his belief that African Americans needed to develop their own middle-class literature.

The best-known and most dramatic evolution in the pages of Freedom’s Journal, of course, was that of the managing editor, John Russwurm. When he and senior editor Samuel Cornish started their newspaper, they were critical of the efforts of most white antislavery reformers. “We wish to plead our own cause,” they wrote at the beginning of the first issue. “Too long have others spoken for us.” In particular, they focused their criticism on the American Colonization Society (ACS), an influential white organization dedicated to sending African Americans “back” to Liberia on the coast of Africa. Yet they allowed a variety of views into their paper. In September 1827, for example, Freedom’s Journal published dueling series of articles by contributors who disagreed about whether the ACS was a friend to free black Americans.[iii] 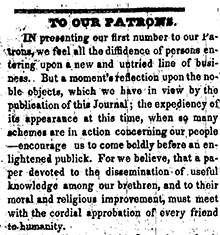 By publishing such articles, the editors were not merely criticizing racism and slavery; they were also portraying the free African American a certain way. Russwurm was himself just the sort of black man they celebrated. Urbane and literate, he had been the third African American in history to receive a bachelor’s degree. (The second, Edward Jones, was a friend of his who earned a mention in Freedom’s Journal for his efforts to open a black academy in Philadelphia.)[iv] 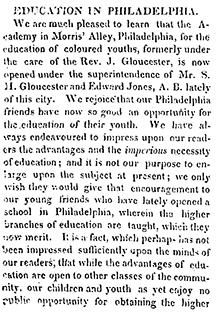 Yet Russwurm was dissatisfied with his life in the United States. Born in Jamaica and educated partly in Montreal, he never felt entirely at home in American cities. Under his direction (Cornish had left the editorship to Russwurm after six months), Freedom’s Journal was still, as late as December 1828, condemning the Colonization Society and expressing confidence that African Americans could achieve full citizenship in the United States. But by the beginning of 1829 Russwurm had not only changed his position on colonization but in fact had decided to emigrate to Liberia himself.[v] 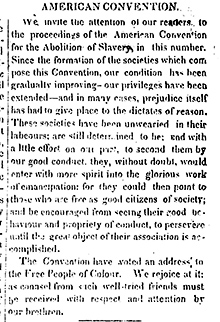 In the first 1829 issue of Freedom’s Journal, Russwurm included several articles borrowed from other sources that cast colonization in a positive light, and he published a melancholy New Year’s editorial complaining about ignorance and dissension among free African Americans, hinting at his own sense of alienation. On 14 February 1829, after corresponding privately with the ACS, Russwurm announced in the pages of his newspaper that his views on Liberia had been “materially altered.” He had decided, Russwurm wrote, that it was a “mere waste of words to talk of ever enjoying citizenship in this country,” and he would now dedicate Freedom’s Journal to persuading readers of the merits of emigration. For this, he took a great deal of criticism from the paper’s readers. At the end of March, as he had planned, Russwurm published his last issue of the newspaper. He soon sailed for Liberia.[vi]

John Russwurm’s change of mind is an excellent example of the “messiness” of history. It shows that ideas are not static; they do not exist forever in a perfect form, but instead are part of life. The frustrations, doubts, and weaknesses of an individual can enter the history of a people. To properly understand a set of ideas, therefore, a historian needs to be able to trace them through time. Just as physical access to manuscripts makes it easier for the historian to understand the living, breathing person, so ready digital access to printed manuscripts can make it easier for her to understand the living, breathing idea.

Jonathan Wilson holds a Ph.D. in American intellectual history from Syracuse University. His research focuses on the uses of national identity in the antebellum United States. A founding contributor to The Junto: A Group Blog on Early American History, he is working on a book about nationalist literary intellectuals in New York City. He teaches history at the University of Scranton and at Marywood University.