A Reverend Revealed: The Real Identity of One of the Most Influential (and Simplistic) Thinkers of the 19th Century

A Reverend Revealed: The Real Identity of One of the Most Influential (and Simplistic) Thinkers of the 19th Century 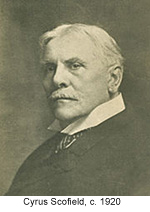 Pulitzer Prize winner William H. Goetzmann of Yale and the University of Texas was secure enough in his scholarship to be his own severest critic. About Beyond the Revolution: A History of American Thought from Paine to Pragmatism, the last book he wrote before his death in September 2010, Goetzmann lamented to this writer (who contributed one of the book’s backcover dust jacket reviews) shortly after its publication that he had forgotten to include a few thinkers he had intended to discuss. For a second editon, I would have suggested to him that he slightly modify the subtitle to read “...from Paine to Premillenialism,” and to have dedicated a chapter at least as long as that on Paine to a relatively unknown but enormously influential character called Cyrus Ingerson Scofield—when he wasn’t being called by his criminal alias “Charlie Ingerson.”

Scofield was easily one of the most influential—and, quite paradoxically and ironically, one of the most simplistic—thinkers of the 19th century, even though his thought bore most of its fruit in the 20th century. One solitary example of the fruit borne by Scofield’s thought is Hal Lindsey’s runaway best seller of the 1970s, to wit, The Late Great Planet Earth. In its wake is the recent mega-million selling Left Behind series by fundamentalists Tim LaHaye and Jerry Jenkins. These highly influential works—along with nationally known preachers like Billy Graham, Jimmy Swaggart, Jim Bakker, Charles Stanley, and John Hagee and institutions such as Dallas Theological Seminary, Jerry Falwell’s Liberty University, and some of the six major Southern Baptist seminaries are rooted in Scofield’s magnum opus entitled The Scofield Reference Bible. Though it was not first published until nine years after Goetzmann’s terminus ad quem of 1900, Scofield and his disciples were peddling the premillenial views in it well before the turn of the century and have been forever thereafter.

Scofield himself, however, is exponentially more obscure than his premillenial thought which has saturated the American evangelical mind. His authorized biography is pitifully short and even more pitifully hagiographic. Though useful, a critical biography of him written in the late 1980s is tendentious to a fault, and while not exactly pornographic is at least the intellectual equivalent thereof. In short, all kinds of questions remain on the table about Scofield’s life. For perhaps 30 years or so now I have been in hot pursuit of any biographical bytes about him because my own intellectual and spiritual roots are in him and his thought. My father, for example, was licensed to preach under the ministrations of William Pettingill—one of Scofield’s best friends and a co-editor of his reference Bible published by Oxford University Press.

Enter Readex and the joy of discovery. Last year I was in Texas visiting a friend who had access to the Archive of Americana. While both of us were chasing a New Haven, Connecticut, lass who was allegedly but not really “The Yellow Rose of Texas,” it occurred to me to ask my friend to run a search on Scofield’s full name, its abbreviated form of C.I. Scofield and a common misspelled variant like Cyrus Sc[h]ofield. The hits prompted initially by his access to Readex resources produced the same heartfelt “Eureka!”s that the faraway 49ers must have felt way west of Texas.

The hits in question helped to fill in some of the very puzzling gaps in the life of Scofield between his departure from Kansas in the early 1870s as a disgraced U.S. attorney general and his alleged conversion to Christianity under the influence of Dwight L. Moody and Moody’s disciples in St. Louis in 1879. A known Kansas newspaper article placed Scofield in a St. Louis jail for six months during this puzzling period. But to date no St. Louis news clipping or jail records had surfaced to confirm the Kansas article. However, thanks to the prompting from America’s Historical Newspapers, some Milwaukee newspapers came to the rescue.

The first hit that began to shed light on Mr. Scofield, whose name was misspelled, was in the October 3, 1878 edition of the Milwaukee Daily Sentinel. Therein we read the following:

Cyrus Schofield [sic] alias Chas. Ingerson, who has been hanging around here since the first of July, and who figured conspicuously at the Metropolitan Hotel in Milwaukee a year ago, was arrested here Tuesday morning on a charge of forgery, dispatches having been received by Deputy Sheriff A.E. Hart from parties in St. Louis to hold Mr. Schofield [sic] until an officer should arrive to take him in charge. Mr. Hart lodged the gentleman in our county jail, where he awaits the arrival of the Chief of Police of St. Louis.

The revelation that Scofield had been using an alias was sensational. We were then able again to search the Readex database and other online databases for this name. We came across several hits in a Milwaukee paper indicating that Scofield had been holding himself forth as a plantation owner in Mobile, Alabama, and that he was courting a local lass even though he had a wife back in St. Louis. The net result of these discoveries was and is the ability now to flesh out further the still often mysterious life of the creator of one of the most powerful pieces of preaching propaganda in American history. A complete integration of these new Readex-prompted finds into the growing biographical data about Mr. Scofield can be found in a longer essay of mine entitled “The Many Conversions of Fundamentalist Saint, Cyrus Ingerson Scofield: ‘Peer Among Scalawags’ and the Golden Goose of Oxford University Press—and Texan.” A copy is available by writing to me at lutzjscn@infionline.net.

James Lutzweiler is Archivist and Rare Book Curator at Southeastern Baptist Theological Seminary in Wake Forest, North Carolina. He also serves as an adjunct professor of American history at Guilford Technical Community College in Jamestown, North Carolina. Concurrent with these duties he owns and operates Schnappsburg University Press, a microfilm sole proprietorship specializing in the identification, preservation and proliferation of historic manuscript collections and periodicals. Since 1979 he has been involved in the restoration to commercial viability of historic properties including a steam-powered feed mill originally built in 1879, and a personal residence built in 1910 by Clarence Mackay (son of John Mackay, the biggest winner of Nevada’s Comstock Lode). In addition he has collected and preserved rare paper documents and autographa related to Santa Anna, Billy Sunday (Billy Graham’s predecessor), C.I. Scofield (creator of the most influential version of the Bible in American history), Raymond Robins (one of America’s first spies on the fledgling Soviet Union) and various figures associated with Spindletop in Beaumont, Texas.