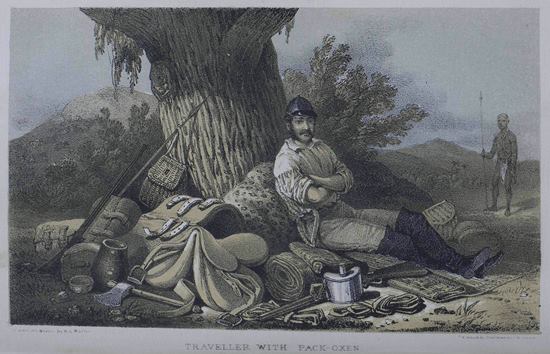 When inquiries are made about how many days’ journey off a place may be, their ignorance of all numerical ideas is very annoying. In practice, whatever they may possess in their language, they certainly use no numeral greater than three. When they wish to express four, they take to their fingers, which are to them as formidable instruments of calculation as a sliding-rule is to an English schoolboy. They puzzle very much after five, because no spare hand remains to grasp and secure the fingers that are required for “units.” 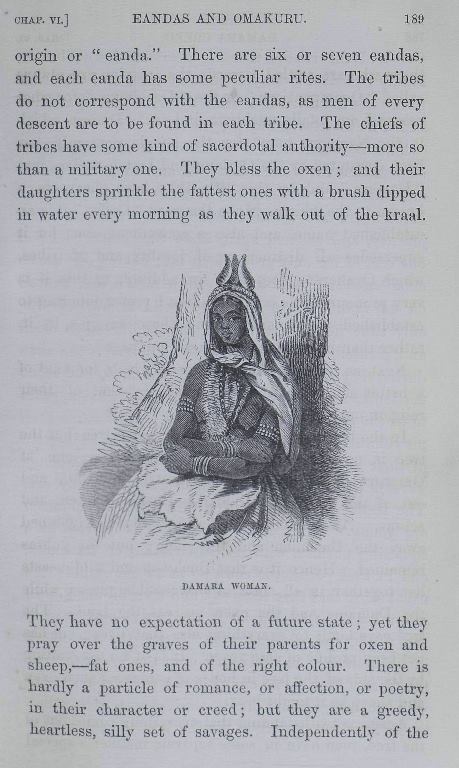 Galton also describes the shortcomings of the Damara as guides, while confirming his own:

Now, constant inquiries have been made for years as to whether there were any fountains near Schmelen’s Hope, but without success, and yet this one, lying in full sight and right in the middle of the river-bed, had never been spoken of to the Missionaries or discovered by them. This is not an isolated case of the difficulty of getting the information you want from the savages; they are intensely stupid, and lie for lying’s sake. One man at Otjimbingue told me, that if I started now to Omanbonde, and travelled as fast as I could, it would take me so long that I should be an old man when I came back. 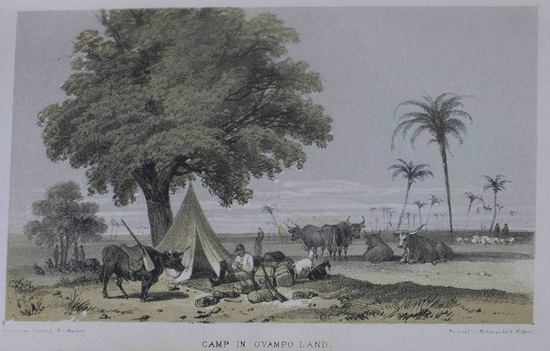 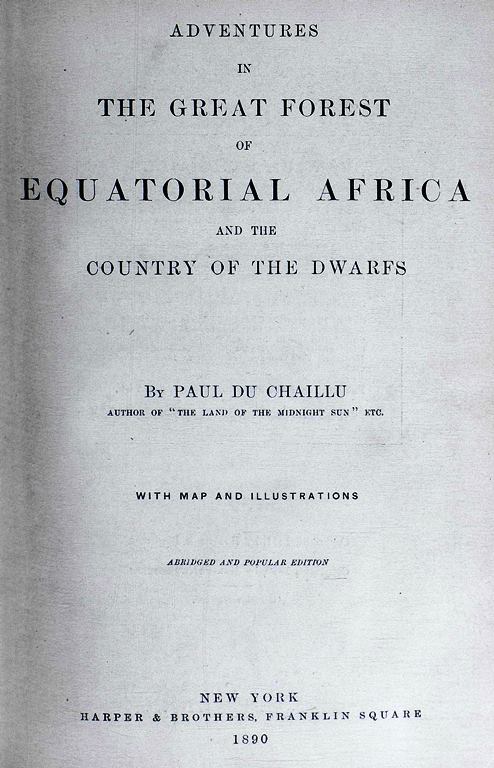 Paul Belloni Du Chaillu (1834-1903) was a French-American zoologist and anthropologist who presented himself as the first modern European to confirm the existence of gorillas and the Pygmy people of central Africa. After a failed gorilla hunt, Chaillu gives the following description of the great apes:

As I saw the gorillas running—on their hind legs—they looked fearfully like hairy men; their heads down, their bodies inclined forward, their whole appearance was like men running for their lives. Take with this their awful cry, which, fierce an animal as it is, has yet something human in its discordance, and you will cease to wonder that the natives have the wildest superstitions about these “wild men of the woods.”

Chaillu continues, retelling “some curious stories of the gorillas.”

They believe, in all this country, that there is a kind of gorilla—known to the initiated by certain mysterious signs, but chiefly by being of extraordinary size—which is the residence of certain spirits of departed negroes. Such gorillas, the natives believe, can never be caught or killed; and, also, they have much more shrewdness and sense than the common animal. In fact, in these “possessed” beasts, it would seem that the intelligence of man is united with the strength and ferocity of the beast.

Illustrating the acumen of these bewitched gorillas, Chaillu writes:

One of the men told how, some years ago, a party of gorillas were found in a cane-field tying up the sugar-cane in regular bundles, preparatory to carrying it away. The natives attacked them, but were routed, and several killed, while others were carried off prisoners by the gorillas… 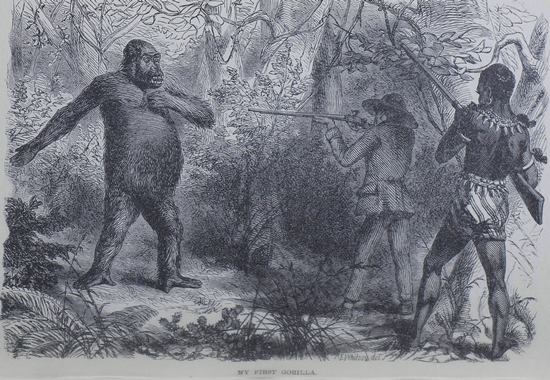 Researchers interested in Chaillu’s description of discovering “a deserted village of the dwarfs” will have to peruse his work themselves. 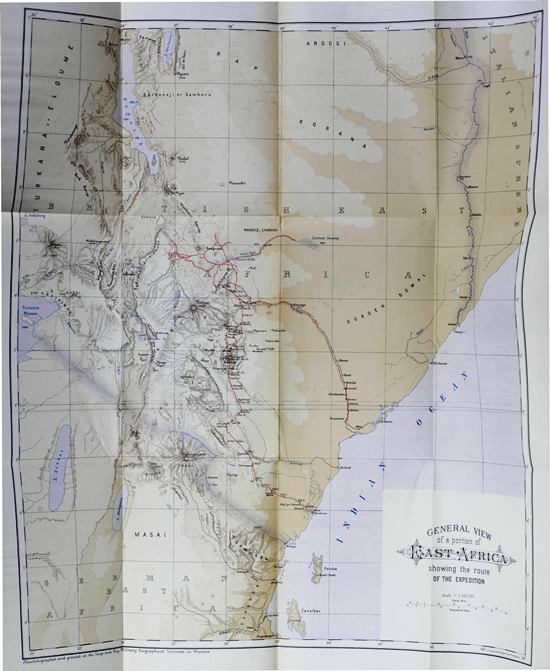 Through Jungle and Desert: Travels in Eastern Africa (1896)

William Astor Chanler (1867-1934) was an explorer, soldier, and politician who served New York’s 14th district in the U.S. House of Representatives. Chanler participated in rebellions and independence movements in Cuba, Libya, and Somalia and gave support to insurgents in Venezuela, Turkey, and China. Later in life Chanler became an ardent anti-Semite. One of his less offensive qualities was a propensity to attach his name to objects of which he was unaware previously. Describing a waterfall, Chanler writes:

Toward noon…a dull, roaring sound reached my ears. After going a half-mile further, the noise increasing all the while, we reached a point where the plain fell to the level of the river. There we found explanation of the roaring sound. The Guaso Nyiro, meeting a wall of black lava in its course, flows over it, and has a drop of sixty feet. Even at the season of the year when we visited it, and when the autumn rains had been very slight, the falls presented an imposing appearance. The wall of lava, being higher in the middle than at the sides, divided the river into two streams. Below the falls these two streams again met, and forced their way between two precipitous walls of black lava; foam was churned and thrown high into the air, and the leaping, tumbling, frothing stream had a really wild and savage aspect. This place we named Chanler Falls. 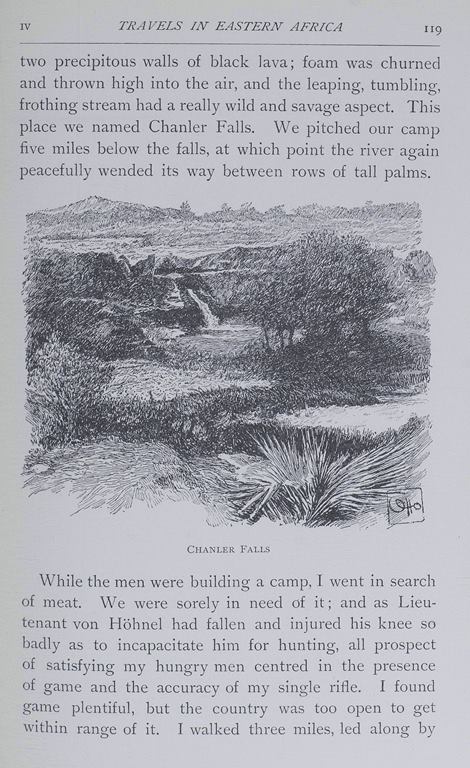 Chanler also named a species of antelope after himself:

During the rains three small antelopes visited the hill just above my camp, and I was able to secure one of them. I felt convinced that it was a new species; so I carefully preserved its skeleton and skin. It proved to be a species of red buck heretofore unknown, and has since been designated “Cervicapra Chanleri.”