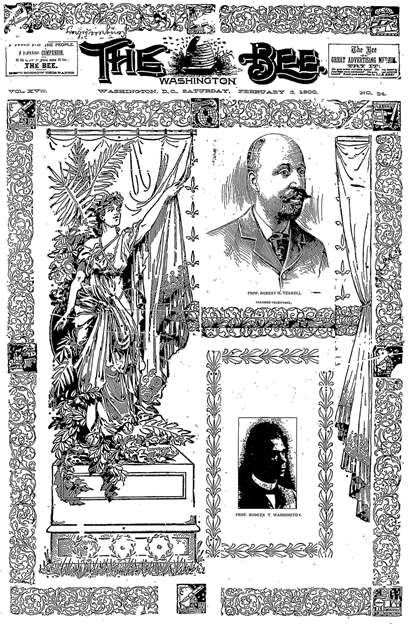 A weekly African American newspaper, the Washington Bee was often the boldest of the several dozen papers published in the District of Columbia in the decades before and after the turn of the 20th century. The Bee’s slogan was “Stings for Our Enemies—Honey for Our Friends.”

Throughout its nearly 40 years in publication, it was edited by African-American lawyer-journalist William Calvin Chase. Despite the Bee’s alignment with Republican Party views, Chase did not hesitate to criticize GOP leaders when he thought they were on the wrong side of an issue. Among the Bee’s daring editorial stands was Chase’s criticism of Booker T. Washington’s conservative positions on black racial progress.

The Bee focused much of its editorial coverage on the activities of the city’s African Americans, and its society page paid special attention to events at local black churches. The paper also covered national issues using its own correspondents as well as wire services. Financial troubles brought an end to the paper in 1922, a year after Chase’s death.

African American Newspapers, 1827-1998, features 1,926 issues of the Bee published between 1882 and 1922. These digitized issues may be browsed by way of the “Newspaper Titles” tab, and searches can be restricted to this newspaper by limiting results to the Washington Bee.

For more information about this online resource, or to arrange a trial at your institution, please contact readexmarketing@readex.com.