The Curious Case of Sherlock Gregory: Social Justice Advocate or Proto-Know Nothing? 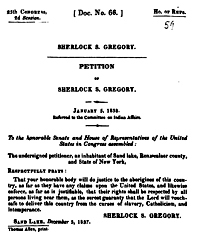 It is almost conventional wisdom to assert that the many, many thousands of private citizens’ petitions and memorials submitted to Congress and printed in the U.S. Congressional Serial Set give us in almost each case a window into the mind of the common man. These men, and often also women, were exercising their right granted by the First Amendment “to petition the Government for a redress of grievances,” which often meant redress of damages, for claims of one kind or another—pensions in thousands of cases, and sometimes on behalf of a concern for more general issues beyond the needs of their particular cases, such as a plea for social justice. An example of that latter class is the brief memorial from a man named Sherlock Gregory, a citizen of Sand Lake in Rensselaer County, New York State, in 1838.

Mr. Gregory in House of Representatives Document 66 is asking that American Indians, whom he calls aborigines, be treated with justice and that their rights shall be respected. These are proper, noble, and perhaps even surprising sentiments in post-Jacksonian America. He further prays that if such justice is observed, the Lord will deliver the country from the curses of slavery, Catholicism, and intemperance. And here one takes pause: surely there is no doubt about the evilness of slavery, though there were many who disagreed, and also intemperance, but Catholicism?

In the December 5, 1835 issue of The Liberator, William Lloyd Garrison’s abolitionist newspaper, we do see the same troika of evils: “slavery, intemperance and Roman Catholicism.”

And seventeen years later from 1855 we find this January 11 article in The National Era, among other examples, of these three evils reading much the same, whereas a year before (December 14, 1854) an article also from The National Era adds Mormon bigamy to the litany of evils. The 1840s and 1850s were of course the era of the nativist political movement known as the Know Nothings and so, despite his other presumably laudable concerns, perhaps Sherlock Gregory was just a little ahead of his time in his fear of Catholicism. Or is it we in the end we who know nothing about what was really in his mind?