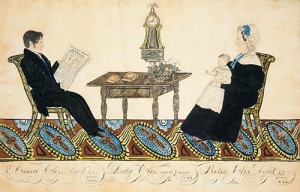 Focusing on the 18th and early 19th centuries, the first series of Early American Newspapers offers over 350,000 issues from more than 710 titles. This widely used digital collection, based primarily on Clarence S. Brigham's authoritative "History and Bibliography of American Newspapers, 1690-1820," contains newspapers from 23 states and the District of Columbia. Below is a brief description—and the nameplate—of several key titles:

Albany Register (New York) One of the most successful and influential American newspapers of the late 18th and early 19th century, the Register was edited from 1808 to 1822 by the ardent anti-Federalist Solomon Southwick.

American Beacon (Norfolk, Virginia) Published by a ship captain in the busy 19th-century seaport of Norfolk, the Beacon focused on seafaring activities.

American Mercury (Hartford, Connecticut) With a reputation for outspokenness, the Mercury was for many years Connecticut’s leading reform paper as well as a key proponent of ensuring legal equality for religious sects.

• Includes 2,586 issues published between 1784 and 1829. Coverage between 1830 and 1833 will be found in Early American Newspapers, Series 6 American Minerva (New York) Self-described as “Patroness of Peace, Commerce, and the Liberal Arts,” Noah Webster’s federalist newspaper was established to support the policies of President George Washington.

• Includes 744 issues published between 1793 and 1796 American Weekly Mercury (Philadelphia, Pennsylvania) Founded in 1719 and the first newspaper in the Colonies to be published outside Boston, the Mercury was well known for its essays on political liberty.

Arkansas Gazette (Little Rock) One of the first newspapers west of the Mississippi, the Gazette was founded 16 years before Arkansas achieved statehood. Throughout the 19th and 20th centuries, it remained one of the most influential newspapers in the region.

Boston News-Letter (Massachusetts) Established in 1704, the News-Letter was the first regularly published newspaper in the British Colonies of North America. Noted for its pro-British sympathies, the News-Letter went through a succession of printers, including Margaret Draper, one the few women printers of the 18th century.

• Includes 3,500 issues published between 1704 and 1776 City Gazette (Charleston, South Carolina) The City Gazette provides extensive coverage of the culture and history of Antebellum South Carolina, including the invention of the cotton gin and the rise of slavery.

Farmer’s Cabinet (Amherst, New Hampshire) The Cabinet is especially noteworthy for remaining neutral when many newspapers of its time were openly influenced by political controversy.

New-England Courant (Boston) Shortly after founding the Courant in 1721, James Franklin was imprisoned and his paper suppressed for its radical views against the General Court. Franklin’s younger brother, Benjamin, who had been serving his apprenticeship at the Courant, assumed control of the paper in 1723. Benjamin Franklin’s early writings, under the name Silence Dogood, appear in this paper.

• Includes 243 issues published between 1721 and 1726 New-Hampshire Gazette (Portsmouth) The first newspaper in the state of New Hampshire, the Gazette is also one the nation’s oldest existing papers.

• Includes 1,507 issues published between 1814 and 1829. Early American Newspapers, Series 2 includes 1,192 issues published between 1814 and 1834. Publick Occurrences (Boston) The first newspaper in North America, Publick Occurrences: Both Forreign and Domestick was published for the first and last time on September 26, 1690 before being shut down for printing “sundry doubtful and uncertain Reports” without royal consent.

• Includes the single issue published in 1690

Vermont Gazette (Bennington) Publisher Anthony Haswell, who brought the first printing press to Vermont, was jailed for publishing articles in the Gazette that criticized the United States’ newly established government.