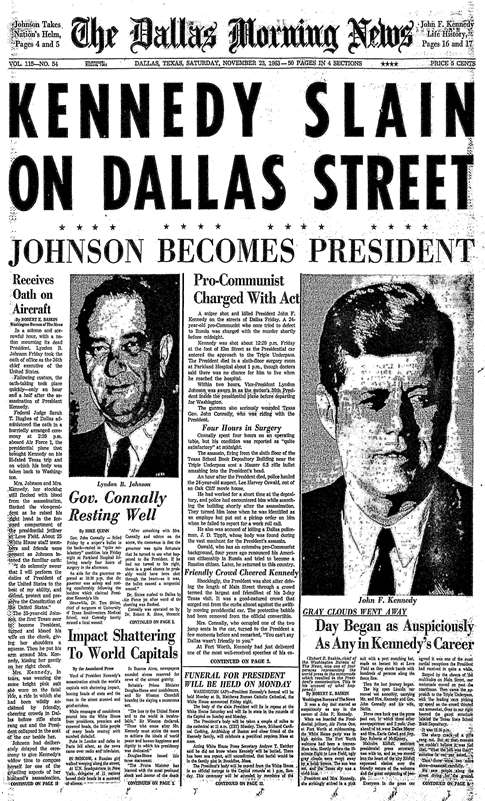 These two copyrighted articles were printed by the Dallas Morning News (Dallas, Texas) on Nov. 23, 1963:

Day Began as Auspiciously as Any in Kennedy’s Career

(Robert E. Baskin, chief of the Washington Bureau of The News, was one of four persons representing the world press in the motorcade which resulted in the President’s assassination. This is his account of what happened.)

By Robert E. Baskin, Washington Bureau of the News 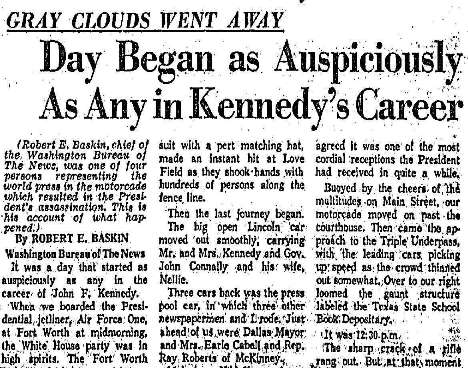 It was a day that started as auspiciously as any in the career of John F. Kennedy.

When we boarded the Presidential jetliner, Air Force One, at Fort Worth at midmorning, the White House party was in high spirits. The Fort Worth welcome had been a tremendous one. Shortly before the 15-minute flight to Love Field, ugly gray clouds were swept away by a brisk breeze. The sun was out, and the Texas sky was a vivid blue.

President and Mrs. Kennedy, she strikingly attired in a pink suit with a pert matching hat, made an instant hit at Love Field as they shook hands with hundreds of persons along the fence line.

Then the last journey began.

Three cars back was the press pool car, in which three other newspapermen and I rode. Just ahead of us were Dallas Mayor and Mrs. Earle Cabell and Rep. Ray Roberts of McKinney.

Malcolm Kilduff, assistant presidential press secretary, was with us, and as we moved into the heart of the city Kilduff expressed elation over the friendly nature of the welcome and the great outpouring of people.

Everyone in the press car agreed it was one of the most cordial receptions the President had received in quite a while.

Buoyed by the cheers of the multitudes on Main Street, our motorcade moved on past the courthouse. Then came the approach to the Triple Underpass, with the leading cars picking up speed as the crowd thinned out somewhat. Over to our right loomed the gaunt structure labeled the Texas State School Book Depository.

The sharp crack of a rifle rang out. But at that moment we couldn’t believe it was just that. “What the hell was that?” someone in our car asked.

Then there were two more shots—measured carefully.

We saw people along the street diving for the ground. Several persons shielded children. Then we knew that the presidential party was under fire.

The motorcade ground to a halt. There was a good bit of activity around the President’s car, with Secret Service men running about. Before we could get out of our car, however, police sirens began wailing loudly. The President’s car started up and quickly was going at breakneck speed.

We did well to keep up with it, skidding around corners.

At that point we did not know what had happened—whether the President was merely being rushed out of the danger zone or if someone had been hit by a shot.

We began to suspect the worst when we roared up to the emergency entrance of Parkland Hospital.

The scene there was one of sheer horror.

The President lay face down on the back seat of the car, with Mrs. Kennedy, her hair disheveled and her hat gone, slumped over him. The bouquet of roses she had been carrying was on top of the President. There was blood on the floor.

In the seat in front of them, Nellie Connally was holding her husband. The door was opened and Connally, with assistance, stood up momentarily beside the car. A large patch of blood showed on his right shoulder. Connally sighed deeply. He was placed on a mobile stretcher immediately.

Then policemen lifted Kennedy out of the back seat, and he was hurriedly wheeled away on another stretcher.

A little later two priests appeared at the hospital. When they came out of the President’s room, they said the last rites of the church had been administered, but they did not indicate that he was dead.

The word came later. President Kennedy died at about 1 p.m. Outside the sun was still shining, but the day seemed to have been transformed completely as the horror of this day—almost unbelievable—began to sink in on us for the first time.

Witness from The News Describes Assassination

(The following eyewitness account was written by a Dallas News staff writer.) 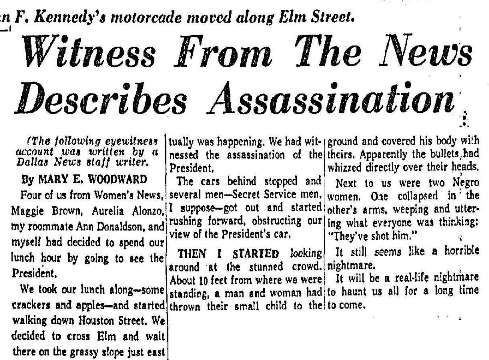 Four of us from Women’s News, Maggie Brown, Aurelia Alonzo, my roommate Ann Donaldson, and myself had decided to spend our lunch hour by going to see the President.

We took our lunch along—some crackers and apples—and started walking down Houston Street. We decided to cross Elm and wait there on the grassy slope just east of the Triple Underpass, since there weren’t very many people there and we could get a better view.

We had been waiting about half an hour when the first motorcycle escorts came by, followed shortly by the President’s car. The President was looking straight ahead and we were afraid we would not get to see his face. But we started clapping and cheering and both he and Mrs. Kennedy turned, and smiled and waved, directly at us, it seemed. Jackie was wearing a beautiful pink suit with beret to match. Two of us, who had seen the President last during the final weeks of the 1960 campaign, remarked almost simultaneously how relaxed and robust he looked.

As it turned out, we were almost certainly the last faces he noticed in the crowd.

After acknowledging our cheers, he faced forward again and suddenly there was a horrible, ear-shattering noise coming from behind us and a little to the right. My first reaction, and also my friends’, was that as a joke, someone had backfired their car. Apparently the driver and occupants of the President’s car had the same impression, because instead of speeding up, the car came almost to a halt.

Things are a little hazy from this point, but I don’t believe anyone was hit with the first bullet. The President and Mrs. Kennedy turned and looked around, as if they, too, didn’t believe the noise was really coming from a gun.

Then after a moment’s pause there was another shot and I saw the President start slumping in the car.

This was followed rapidly by another shot. Mrs. Kennedy stood up in the car, turned half-way around, then fell on top of her husband’s body. Not until this minute did it sink in what actually was happening. We had witnessed the assassination of the President.

The cars behind stopped and several men—Secret Service men, I suppose—got out and started rushing forward, obstructing our view of the President’s car.

Then I started looking around at the stunned crowd. About 10 feet from where we were standing, a man and woman had thrown their small child to the ground and covered his body with theirs. Apparently the bullets had whizzed directly over their heads.

Next to us were two Negro women. One collapsed in the other’s arms, weeping and uttering what everyone was thinking: “They’ve shot him.”

It will be a real-life nightmare to haunt us all for a long time to come.