Jallianwala Bagh: A Landmark in the Struggle for Freedom 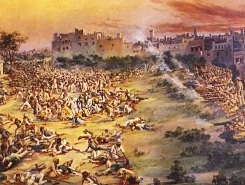 In February 2013, British Prime Minster David Cameron laid a wreath in Amritsar, India, the site of a bloody crackdown by British troops against pro-independence protesters in 1919. The British attack left more than 1,000 Indian civilians dead. At the recent wreath-laying ceremony, Cameron wrote in the visitors’ book:

This was a deeply shameful event in British history—one that Winston Churchill rightly described at that time as ‘monstrous’. We must never forget what happened here. And in remembering, we must ensure that the United Kingdom stands up for the right of peaceful protest around the world.

Known today as the “Amritsar Massacre,” the violent crackdown is widely viewed by historians as a key turning point towards India’s eventual independence from ruling Britain. This pivotal event is covered extensively in the native Indian and British Raj newspapers found in South Asian Newspapers, 1864-1922, a module in the digital World Newspaper Archive created in partnership between Readex and the Center for Research Libraries. 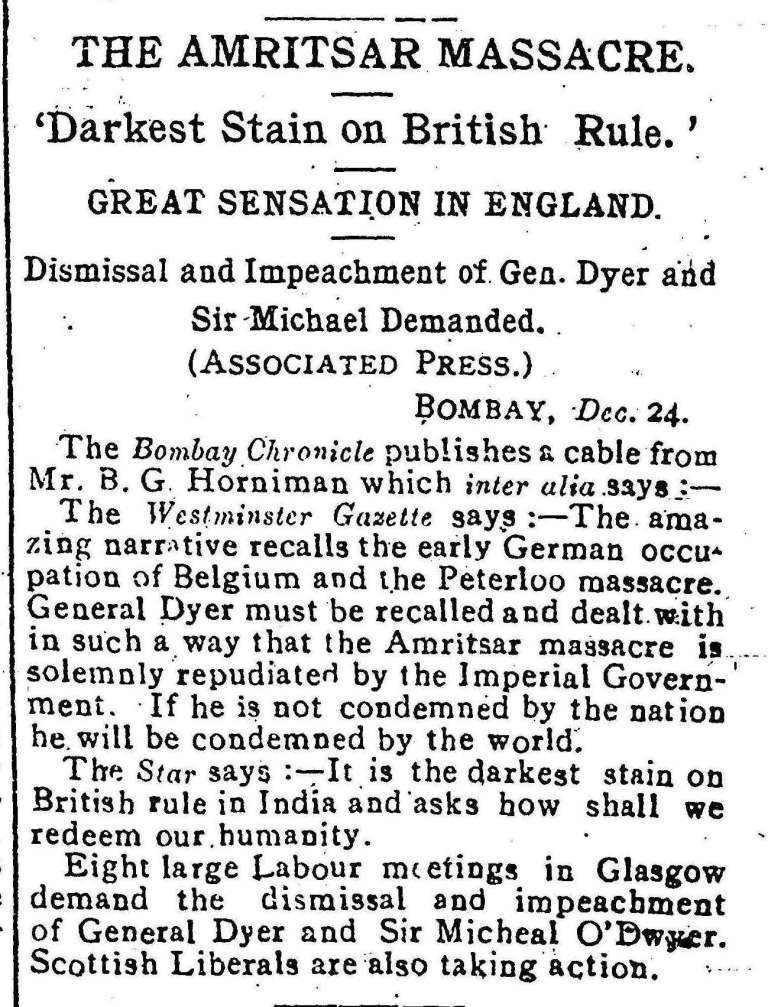 The origins of the Amritsar Massacre are traced to the colonial government’s fear of a growing rebellion against the British Raj. Created to prevent further unrest, the Rowlatt Act of 1919 indefinitely extended emergency powers to root out conspiracy and prevent public unrest.  The controversial Act legalized imprisonment without trial, strict press control, arrests without warrant and juryless trials. Mohandas Gandhi’s outrage at the Rowlatt Act elicited an unprecedented response of furious unrest and mass protests. 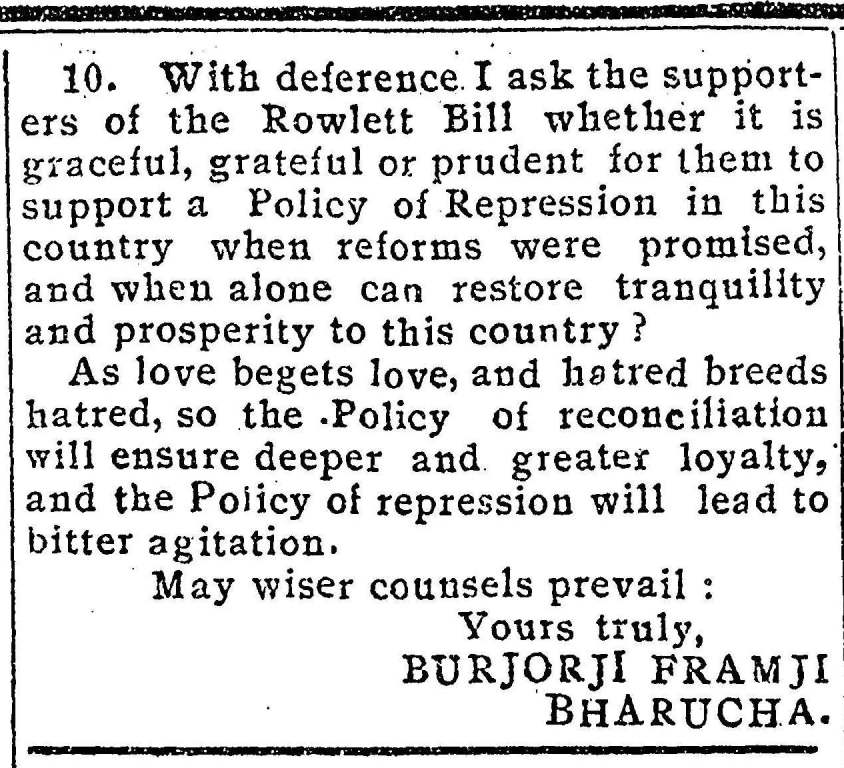 On the afternoon of April 13, 1919, during the traditional festival of Vaisakhi, more than 15,000 people gathered in the Jallianwala Bagh, a public garden surrounded on all sides by houses and buildings with a few, mostly locked, narrow gates. Defying the ban on public gatherings, the crowd congregated around a three-meter-wide well at the center of the garden. Upon learning of the gathering, Brigadier-General Reginald Dyer marched to the garden with fifty riflemen and two armored cars mounted with machine guns. As he approached the main gate, Dyer realized the entrance was too narrow for the armored cars. He then moved his troops to a raised bank and blocked the main exits. Without warning the crowd to disperse, Dyer gave the order to focus on the densest section of the crowd and open fire.

The British fusillade lasted nearly ten minutes, ending only when all ammunition was spent. Thousands lay dead and wounded from a combination of gunshots, stampedes toward the blocked gates and leaps into the central well to escape the barrage. The wounded were not permitted to be moved to hospital beds due to the curfew, and many more died during the night.

The government announced a committee of inquiry into the events in Punjab. On November 19, 1919, Gen. Dyer was called to appear. He testified that he went to Jallianwala Bagh with the deliberate intention of opening fire if he found a crowd assembled there. "I think it quite possible that I could have dispersed the crowd without firing,” he declared, “But they would have come back again and laughed, and I would have made, what I consider, a fool of myself….Therefore I considered it my duty to fire on them and to fire well.”1  Dyer stated he did not stop shooting because “a little shooting would not do any good.” Asked if he made any effort to tend to the wounded after the shooting, he replied, “Certainly not. It was not my job. Hospitals were open and they could have gone there.”2

"Supposing the passage was sufficient to allow the armoured cars to go in, would you have opened fire with the machine guns?"

"In that case, the casualties would have been much higher?"

Members of the Commission were divided racially, but the final report, released on March 8, 1920, unanimously condemned Dyer’s actions. He was found guilty of “mistaken notion of duty” and relieved of command on March 23, 1920. 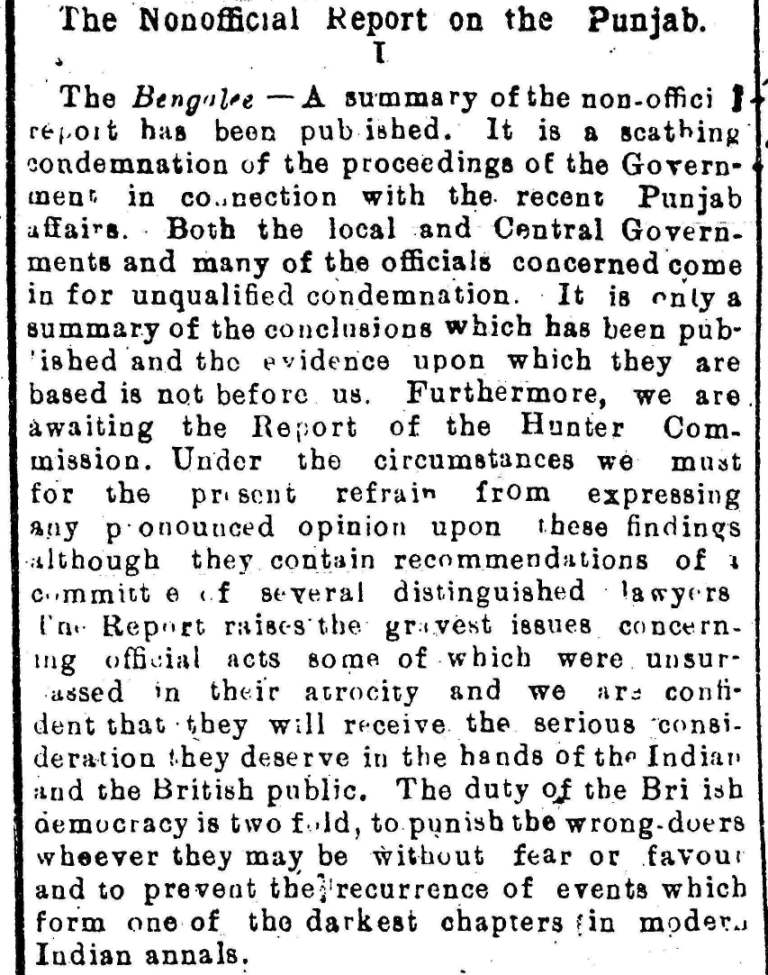 The events at Jallianwala Bagh became the central rallying theme for freedom from British rule. Ongoing newspaper stories and editorials over the following two decades stirred nationalist feelings and had a profound effect on Mohandas Gandhi. After the massacre, Gandhi became convinced India should accept nothing less than full independence. And with that, his concept of Satyagraha, or peaceful, non-violent resistance, was implemented on a nationwide scale. Twenty-eight years, four months and two days after the Amritsar Massacre, just after midnight on August 15, 1947, India became an independent nation.