For ten years or more, faculty and students have been asking Readex to “bring history to life” in new ways. “You have tremendous products,” they tell us, "and we love them. Thank you. We’d love them even more if we could do more than search, retrieve, read, then search again.”

It’s time to bring on the love. 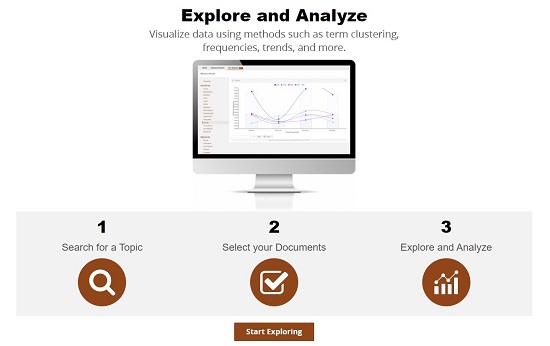 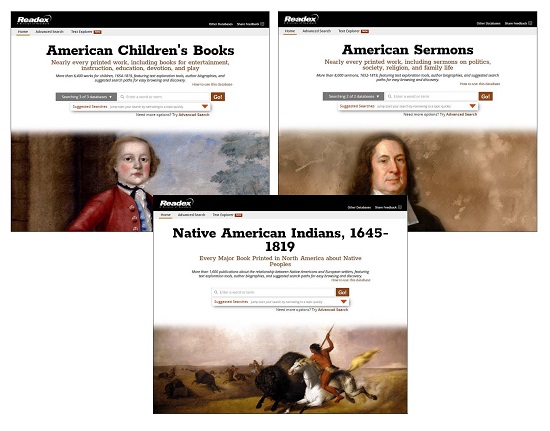 Each of these collections features the definitive record of its genre or subject from the very beginning (in the 1600s) through the year 1819. The texts cover an endless range of subjects: family, government, Native American relations, child-rearing, health, women’s lives, social commentary, daily life, education, religion, philosophy, politics, and hundreds more.

Until now, the only way a reader could approach the texts was, well, to read them. Reading is great—always has been, always will be—but it’s no longer the only way to explore texts. Computer-power can help, too!

Computational methods (“artificial intelligence”) have been applied to texts for decades, initially on big mainframes (supported by command-line programming) and more recently using various software available to users of laptops and PCs. These methods are variously called “data mining” (generally when a big mainframe is involved) or “text exploration” (generally when the project doesn’t require the content to be loaded onto a mainframe).

These computational methods are the backbone of Readex Text Explorer. They help users see linguistic and thematic patterns in a single work or across multiple works—patterns that could never be discovered solely by reading.

What exactly does RTE do for digital explorers?

RTE is an end-to-end set of workflow tools that empower users to do the following:

At the core of Readex Text Explorer is a set of software tools known as “Voyant Tools.” Voyant is the most widely accepted set of exploration tools among scholars and students alike (which is why it is so popular in Digital Humanities settings). Surrounding the Voyant Tools is a complete workflow designed by Readex—a workflow from start to finish—to enable the most effective and rewarding “text explorations.”

Let’s try it out

Here’s a look at Readex Text Explorer using Native American Indians, 1645-1819, as the source of a corpus:

First a user selects some texts to begin her exploration. Here the user has chosen to use the Readex “Suggested Searches” tool to explore “French and Indian War” in early American history. 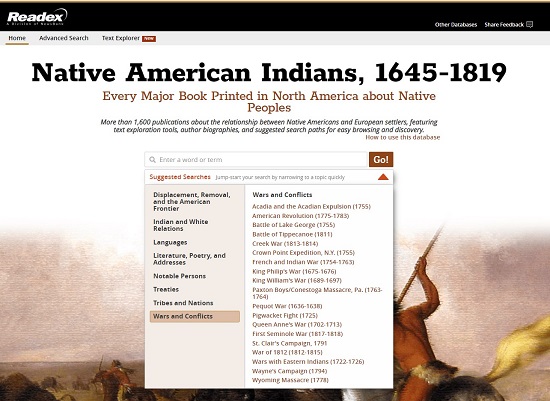 The exploration begins with this simple search, which will yield a Results List (commonly called a “results set” by digital humanists).

From the results set, the user selects texts of her choice to explore more deeply. The user ticks the box next to a work and in so doing adds the work to her corpus: 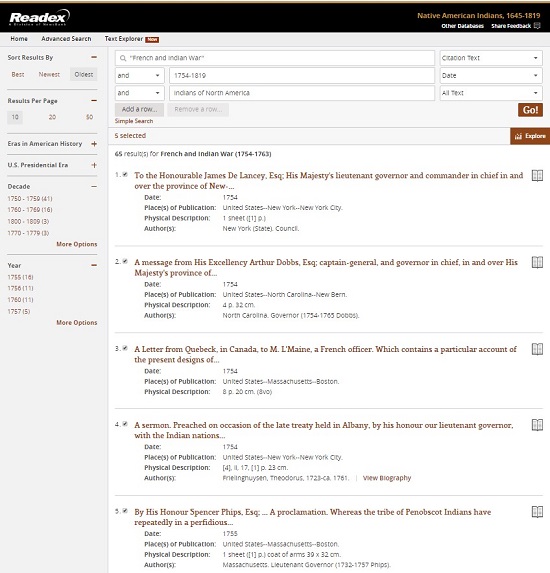 As you can see, the user has selected five texts to explore covering the years 1754 to 1809.

Next, our explorer clicks the “Explore” button in the upper right of the Results List (see the illustration above). This triggers a message confirming that the selections in the corpus are the right ones for the user: 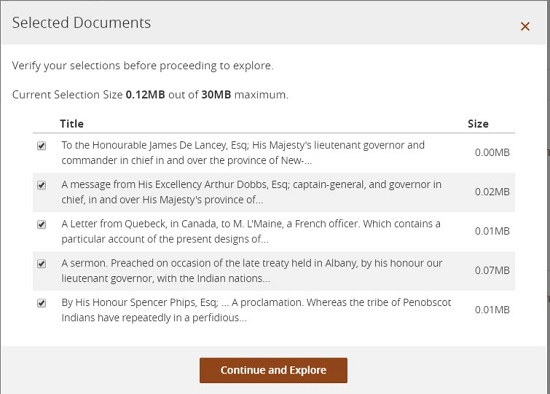 Having confirmed that the selection meets the need, the user now clicks the Continue and Explore button at the bottom of the Selected Documents list. This action brings the Readex Text Explorer to life and loads the “Snapshot” view of the RTE user dashboard. 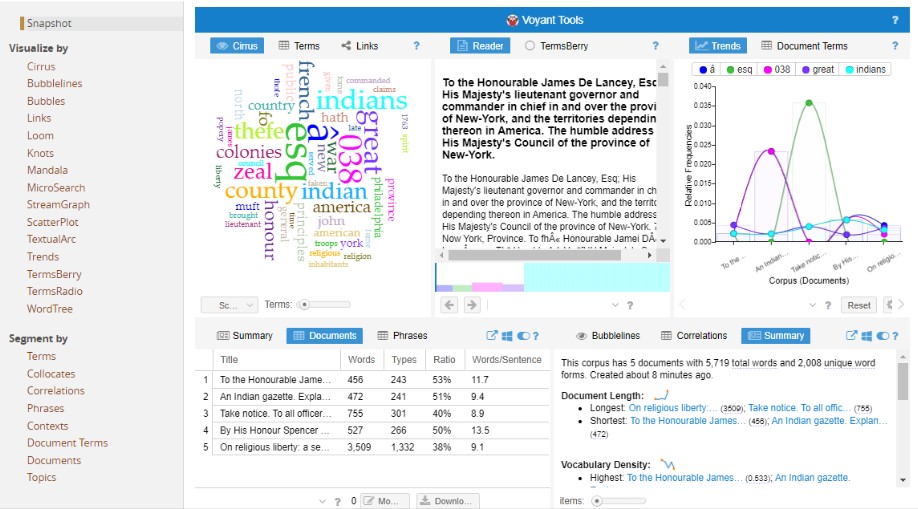 In the Snapshot view shown below, the user can now “see into the texts”—examine word patterns, manipulate the texts, “clean” the texts by eliminating words she doesn’t want to include in her exploration, and change views and exploration paths endlessly. Changes-of-view will yield surprisingly fresh perspectives on the texts—perspectives not otherwise available, of course, “just by” reading.

Here’s a close-up of the Cirrus word-cloud panel: 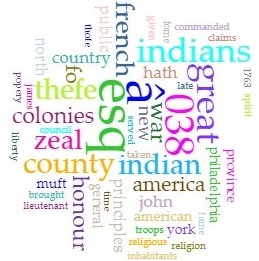 In the Trends panel (showing in the upper right of the Snapshot view) the explorer can instantly see the occurrence patterns of certain terms. Going a bit deeper, the user can explore syntax, for example (see the blue-box pop-up): 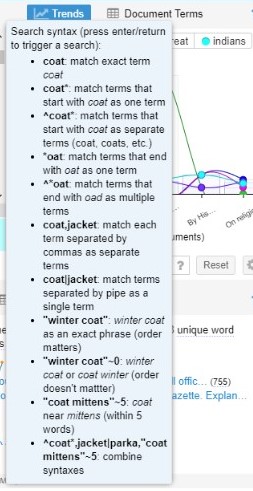 Or even explore using bubbles (or many other visualizations):

The navigators on the left of the screen—which are unique to Readex in their design and presentation—make it easy to view and segment the materials to the user’s liking. This makes it easy to revise and change corpuses. It’s also simple to export and save the results.

That’s the Readex Text Explorer in a nutshell: A powerful tool that unlocks the text beneath the text.

Why is this so important for scholars and students? There are many reasons, I think. Let me share four of them: