[This article by Kelly J. Baker, who currently teaches American and religious studies at the University of Tennessee, Knoxville, first appeared in the September 2009 issue of The Readex Report. Baker is also an editor of the Religion in American History blog. Her first book, Gospel According to the Klan: The KKK’s Appeal to Protestant America, 1915–1930, is being published this month by the University Press of Kansas.] 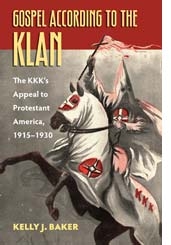 “An original and sobering work” -- David Morgan, author of Protestants and Pictures

In 1915, the second incarnation of the Ku Klux Klan was born. The second Klan, a memorial to the Reconstruction Klan and its work in the postbellum South, was to act as a restructured fraternity that supported white supremacy, the purity of white womanhood, nationalism and Protestant Christianity. William J. Simmons, a fraternalist and former minister, organized the charter for the new order and consecrated its beginning by setting afire a cross on the top of Stone Mountain, Georgia. Simmons’s flair for the theatric (including the adoption of the fiery cross as a symbol of the Klan)—along with the order’s aggressive public relations campaign and membership boon—quickly gained the attention of local and national newspapers. Reporters commented on the Klan's platform, its stated intentions and its historical connections to the Reconstruction Klan. Some of the initial coverage, in the South especially, was favorable. The Columbus Enquirer Sun wrote, “Proof that the noble spirit that actuated the members of the famous Ku Klux Klan in the reconstruction period still lives among the sons is shown in the remarkable growth of the organization…” (1) The new order seemed to have the potential to reform the region—and possibly the nation. 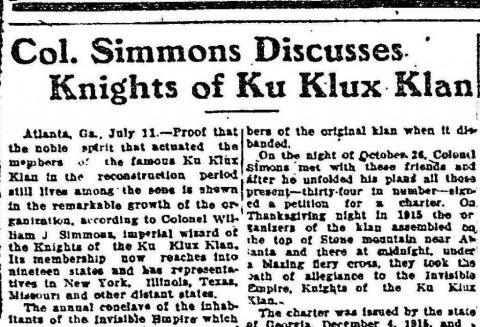 The Klan's white robes and masks, elaborate initiation (or naturalization) ceremonies, burning crosses and altars draped with the American flag all proved alluring to the media and their readership. The Miami Herald documented the “weird” ceremonies of the Klan from a distance. Especially fascinating was the naturalization ritual in which a mass of white-robed men swore loyalty to their nation and to Christianity. The Herald noted both the presence of an altar containing the fiery cross and the American flag at this central ritual. (2) Although Simmons cloaked the new order in the familiar white robes of its predecessor, he explicitly developed the Christian nature of the order and its ties to religious faith and patriotism. Under his dramaturgical leadership, the order moved beyond the bounds of the South and into the rest of the continental United States. 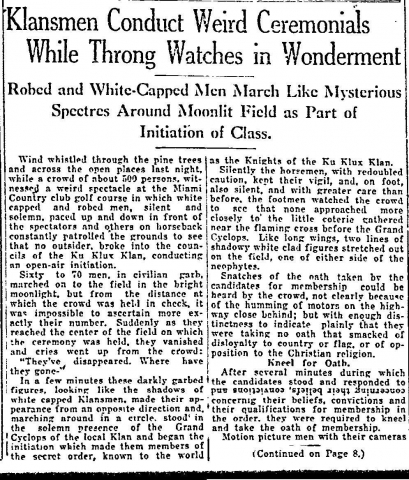 The press as well as the larger public, however, did not remain congenial to the new Klan. They denounced the order as a money-making scheme, an agent of hate and violence and a dangerous secret society. Scholarship on the 1920s Klan affirms that the order did commit acts of violence, employed the rhetoric of anti-Catholicism and anti-Semitism and promoted white supremacy by degrading African Americans. The order was not, however, a secular fraternity. Instead, its popularity came from the combination of religion and nationalism it promoted, both of which appealed to white Protestant Americans who feared that immigration and changing social mores would overthrow their social dominance. Scholars of the Klan note the religious overtones of the order’s printed and spoken word, and American newspapers documented and opposed the Klan’s Christian presentations. The second Klan required its members to be not only white and male but also Christian. Religion became the centerpiece of the second Klan’s platform, and Klansmen showed their allegiance to their faith through church attendance, speeches and writings and the recruitment of ministers as members. Visiting churches to make monetary donations was another method used by Klan members to show their commitment. In Spokane, Washington, two Klansmen dressed in full regalia—white robes with masks over their faces—presented the evangelist George Wood with fifty dollars and a letter affirming the order’s support of the “Christian religion” because of the success of his revival.(3) 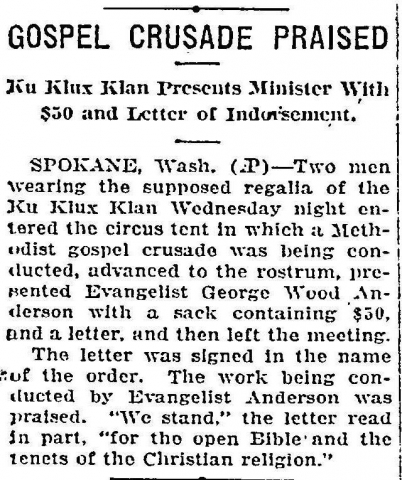 In Indiana, twelve robed Klansmen gave revivalist Billy Sunday fifty dollars and a similar letter. According to the Miami Herald’s account, the Klan visit shocked Sunday, who could not even read the letter he had been given. The letter praised Sunday’s efforts to promote Christianity in his revivals. Sunday responded, “I am not a member of the Ku Klux Klan, nor am I a member of any secret order, but I have learned more tonight than I ever knew.”(4) Sunday’s surprise at the presence of Klansmen at his revival signaled a lack of knowledge of the order’s Christian foundations. 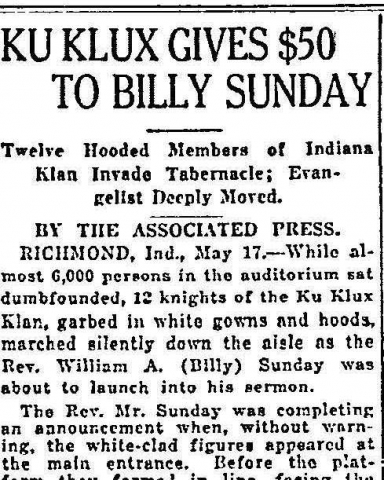 Despite the efforts of the Klan to highlight its ties to Protestant Christianity, the order faced opposition from ministers, church councils and other Christians. In 1922, the Federal Council of Churches recorded its conviction that the rise of secret organizations “whose activities have the effect of arousing religious prejudice and racial consequences [is] fraught with grave consequences to church and society at large.”(5)

The resolution was aimed directly at the Klan and church members who joined the order. Yet despite the Council’s condemnation of the order, local churches continued to affiliate with the fraternity. Other detractors were more strident in their denunciations. Anti-Klan lecturer and author W.C. Witcher denounced the Klan’s claims to 100% Americanism, Christianity and lawfulness. He also derided the order’s conflation of nationalism and religion. Witcher feared that the order would damage Christianity, arguing “If the Klan is a religious organization it will destroy the Christian religion, unless it is destroyed itself.”(6)

Former Klansman Henry Fry also voiced his opposition to the order and declared its brand of Christianity to be false and blasphemous. In a public letter to the Klan, Fry documented the supposed egregious behaviors of the Klan—including fraud, financial scheming and lawlessness—and its insult to religion.(7)