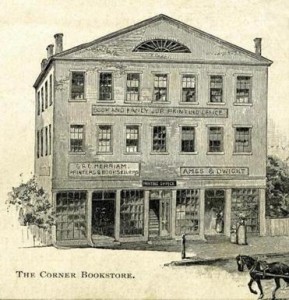 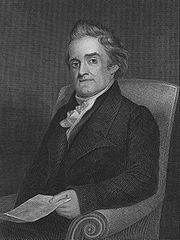 A short distance down the Connecticut River from Springfield, Noah Webster of Hartford, Connecticut, had published his American Dictionary of the English Language.  His unwieldy two-volume set was not well received; the figures of intellect in Boston balked at the author’s vision of an American representation of the English language.  With guarded optimism Webster tried a second edition, but found himself with a stack of unsold books and mounting debt.  After his death, his heirs sold the remaining copies and all rights to Webster’s white elephant.  The buyers, the savvy booksellers Merriam, promptly reduced the price.  The move was applauded by the Springfield Daily Republican: 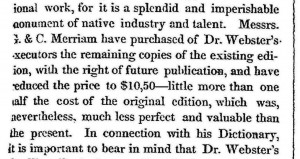 Mssrs. G. & C. Merriam have purchased of Dr. Webster’s executors the remaining copies of the existing edition, with the right of future publication, and have reduced the price to $10.50—little more than one half the cost of the original edition, which was, nevertheless, much less perfect and valuable than the present.

The Merriams began outlining a revision of Webster’s Americanization of the language.  They backed the idea of standardizing the country’s scattered habits of spelling, pronunciation and definition.  Experts were hired to write and edit the first Merriam-Webster edition which rolled off the presses in 1847. 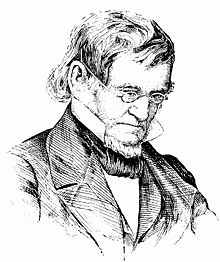 In the meantime, competition appeared in the market.  Dr. Joseph E. Worcester, an old-school scholar from Cambridge, Mass., produced his Universal and Critical Dictionary of the English Language for an affordable $3.50.  Worcester chose to preserve British orthography, scorning the reforms advocated by the Merriams and their predecessor.  Opinion in the Greater Boston area was reflected by The Norfolk Democrat (14 April 1848),which declared,

We have no hesitation in saying that this New Dictionary [Worcester’s] must become the Standard in this country….Its only rival…is the revised edition of [Merriam] Webster, but is still deformed with many of Webster’s peculiarities and can never prevail. 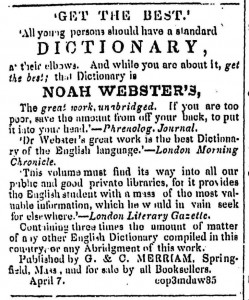 The Merriams responded to Worcester’s inexpensive dictionary with an advertising blitz urging the reader to “Get the Best.” The promotion contained testimonials from London purporting theirs to be the best lexicon in the English language published by an American firm. The ad appeared in cities around the nation with a special emphasis in Eastern Massachusetts.  The lexicography battle was on. Local school committees, college professors and even legislators lined up to side with their preferred publication.  Horace Mann bought copies of Worcester’s volume to distribute in Massachusetts normal schools (teachers’ colleges), while the City of New York purchased Webster’s for its public schools.  Newspaper editors endorsed their favorites.  The Boston Herald weighed the options, 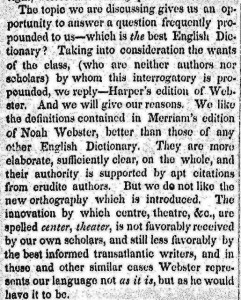 We like the definitions in Merriam’s edition of Noah Webster, better than those of any other English Dictionary….But we do not like the new orthography which is introduced.  The innovation by which centre, theatre, etc., are spelled center, theater, is not favorably received by our own scholars….Webster represents our language not as it is, but as he would have it to be.

The Merriams retaliated with a column and a half of advertising in their hometown newspaper, The Springfield Daily Republican, featuring endorsements of their product by authorities in schools and governments across the country.  They further proclaimed,

In the United States he [Webster] is the authority everywhere, except in Boston.

The Merriam v. Worcester rivalry lasted more than a decade and resulted in new and improved editions of both dictionaries.  The popularity of Worcester’s volume, however, faded as the author entered his final days.  By the time he died in 1865, the war of the dictionaries had come to an end.  Merriam-Webster’s was the clear victor.  Today the firm is still located in the city of its origin and continues to meet the demand for the best depiction of American English. About the Author Barbara Shaffer has been digging into the history of Springfield, Massachusetts, since her college days. She speaks at historical societies, libraries and schools and is presently compiling a collection of historical vignettes about the city she loves. Both her Readex Blog post “Local Intelligence: Exploring the Past of My Adopted Hometown” and her Readex Report article “Loving the ‘City of Homes’…and its Historical Newspaper Archives” appeared in April 2012.  Follow her tweets of Springfield lore at www.twitter.com/SpfldHistorian.