Washin' Away the Blues: Gene Kelly in American Newspaper Archives

August 23, 2012, would have been Gene Kelly’s 100th birthday. While that would be reason enough to browse American Newspaper Archives for coverage of his life and work, 2012 is also the 60th anniversary of his beloved 1952 musical comedy Singin' in the Rain. So here’s a double shot of shout out to the Irish-American entertainer. The three stars of Singin' in the Rain came to show business by different routes. Kelly was a dancer and choreographer who had been a chorus boy and then a Broadway star. Debbie Reynolds had won a California beauty contest before signing a movie contract. And Donald O’Connor was from a vaudeville family and had been on stage and screen from his youth. Regardless of their professional origins, they made a potent combination. 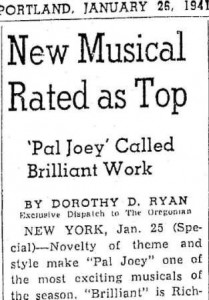 Gene Kelly’s playing of Joey is one of the best features of this lively show. One of the most likeable of the new personalities on Broadway, he is able to bring out all the naïve and boastful traits of Joey in just their right perspective. His tap dancing is a delight and he is being riotously welcomed as a coming Fred Astaire.

Hollywood soon came calling for Kelly. His first film, For Me and My Gal, was released in 1942. In the decade between his movie debut and Singin' in the Rain, he made such films as The Pirate, Take Me Out to the Ballgame, Anchors Aweigh, and Cover Girl. His dance partners included Rita Hayworth, Esther Williams, Judy Garland, Fred Astaire, and Frank Sinatra, not to mention a cartoon mouse, a mop, and his own reflection. In On the Town, he and co-director Stanley Donen famously staged some dances on the streets of New York City, a first in the history of location filming.

In this review of Kelly’s first film, the Oregonian's drama editor Herbert L. Larson noted Kelly's "excellent" debut as the vaudeville dancer who becomes the love interest of Judy Garland (in her first adult role): 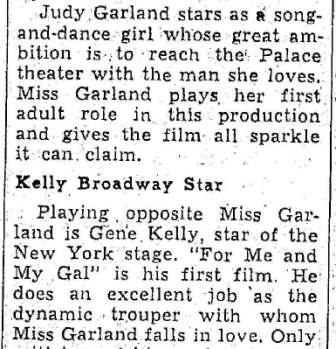 This publicity still of Garland and Kelly in The Pirate appeared in the Sunday Times-Picayune in 1948. 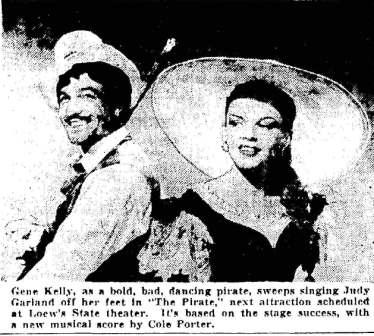 Kelly's dancing differed from Fred Astaire’s. Kelly was more likely seen in white socks than white tie and tails. His dances combined ballet, modern dance, and tap, and he moved with masculine exuberance, not Astaire’s sophisticated elegance. Kelly choreographed An American in Paris, which was directed by Vincente Minnelli and co-starred Oscar Levant and Leslie Caron. Like On the Town, it was filmed on location. It featured a score by George Gershwin and a lengthy ballet set to the title piece of music. This  review was written by John Rosenfield, the Dallas Morning News' drama and music critic for 41 years: 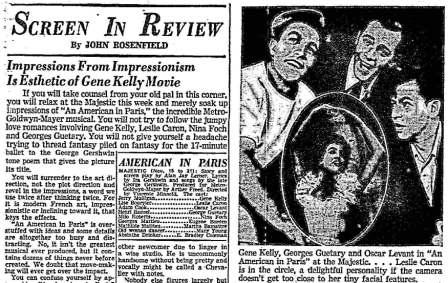 Singin' in the Rain told the story of the transition from silent to sound films. Jean Hagen and Gene Kelly portray a screen couple who must remake their silent picture as a talkie. Unfortunately, her voice and accent sound horrible over a theater’s loudspeakers. Debbie Reynolds plays the young singer/actress persuaded to dub Hagen’s voice. She and Kelly fall in love. And Donald O’Connor co-stars as Gene’s best friend. 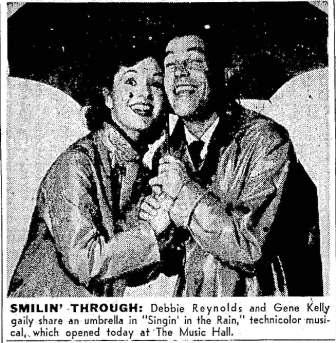 This movie still appeared in the Seattle Daily Times:  Inez Wallace, entertainment columnist for the Cleveland Plain Dealer from the late 1920s to the 1950s, previewed the plot using film stills in the paper's Sunday Pictorical Magazine: 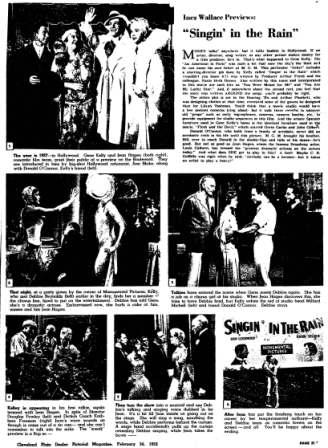 Among the film’s many notable song-and-dance sequences are these three: • The trio of Reynolds, O’Connor, and Kelly singing and dancing to “Good Morning” • The dancing of Kelly and Cyd Charrise in the “Broadway Melody Ballet” • Donald O’Connor’s hilarious and athletic song and dance to “Make ‘Em Laugh” in which he  backflips off a wall and flies through the scenery. All memorable, yes, but the dance that comes first to mind is the one Kelly performed with an umbrella to the title song. He’s in love, the world may be going his way, and the pouring rain doesn’t mean a thing. He’s patting his way through a puddle and swinging around a lamppost when he’s seen by a cop who is not amused. It’s an unforgettable merging of his strengths as a dancer and skills as a choreographer. And, he co-directed the film with Stanley Donen. This review from the Seattle Daily Times opens with “Feel Blue? Need a lift?” and remarks that Kelly's “bag of dance tricks” appears to “have no bottom.”

Kelly’s movie career continued. But these back-to-back films—Singing in the Rain and An American In Paris—were its climax. He continued to act, direct, and choreograph, but never again would his work rival his achievements of 1951 and ‘52. As Hedy Weiss put it in the Chicago Sun-Times after his death in 1996:

At the peak of his talents, in the 1940s and '50s, Kelly personified the optimism of post-World War II America. He was the next best thing to baseball.

Primary Sources in the Classroom
New Collections
Trends in Database Use