Writing the First Biography of Noah Webster in the Digital Age 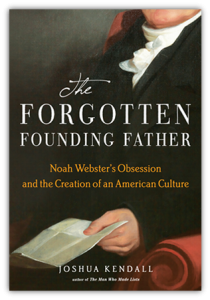 More than America’s greatest lexicographer, Noah Webster (1758-1843) published a supremely influential spelling book, served as confidant of both George Washington and Alexander Hamilton, effectively supported the U.S. Constitution through a widely read essay, edited New York City’s first daily newspaper American Minerva, served as a state representative in both Connecticut and Massachusetts, and helped to found Amherst College. To bring this "full-bodied human being to life," award-winning journalist Joshua Kendall, author of The Man Who Made Lists, recently published The Forgotten Founding Father: Noah Webster’s Obsession and the Creation of American Culture (Putnam, 2011). Joseph J. Ellis calls Kendall's new biography “by far the best, and best written, life of Webster,” and James McGrath Morris says “Kendall single-handily rescues the least-known founder of American politics and culture and gives him his long overdue place of importance.” In his note on sources used to write The Forgotten Founding Father, Kendall explains:

“I aimed not to write the definitive academic biography but to introduce Noah Webster to the broad reading public, who know him largely as a name pasted onto a reference book. Intrigued by the psychological turmoil which fueled his literary activity, particularly the dictionary, I was interested in bringing the full-bodied human being to life.  To tackle this assignment, I deemed it necessary to peruse as many primary sources as possible, especially since Webster’s descendants had done so much to sculpt his public image.... “I also immersed myself in Webster’s own published words.  As the first Webster biographer of the digital age, I could do much of this reading on my own laptop.  The online resource The Archive of Americana now features scanned copies of most American newspapers between 1690 and 1922.  By searching Webster’s name, I was able to find countless newspaper articles by and about this prolific journalist, including some not mentioned in the six-hundred-page tome A Bibliography of the Writings of Noah Webster, edited by Edwin H. Carpenter (New York, 1958). Likewise, the early American imprints section of the database includes the full text of many of Webster’s books and speeches, such as his various Independence Day orations and his 1806 ‘compend.’”

As Kendall notes, the Archive of Americana provides online access to cohesive collections of historical newspapers and books. This growing family of searchable printed materials, which also includes essential U.S. government publications, puts tens of millions of pages of primary documents at researchers' fingertips. For more information about the Archive of Americana, please contact readexmarketing@readex.com or visit our website.