Imprints from the Library Company of Philadelphia

Created from the renowned holdings of the Library Company of Philadelphia, Caribbean History and Culture, 1535-1920, is the largest and most significant collection of its kind. More than 1,200 fully cataloged and searchable books, pamphlets, almanacs, broadsides and ephemera cover the history of this broad region from the 16th century to the early 20th century.

New research and teaching opportunities
Major subject areas covered include Atlantic Studies, Diaspora Studies, Economic Studies, History of Medicine, Ethnicity and Gender Studies, Latin America and Slavery. Based on the Library Company collection that itself was an ambitious attempt to gather all printed information about this area and its history, works of all kinds are included: multi-volume histories of the region, letters, diaries, trial records, confessions, ship logs, military reports, government documents and much more.

The geographical focus of these materials is all of the islands of the Caribbean Sea, widely referred to as the West Indies, though many works also deal with nearby islands technically not part of the Caribbean chain. Also included are rare works that cover both Caribbean islands and neighboring areas such as Florida, Mexico and Brazil. In addition, due to the nature of the Atlantic slave trade, some works also cover Africa, especially the West African coastal nations that played a key role in the transportation of the enslaved to the New World.

The places of publication of these 1,200-plus works include primarily England, France, Spain, the Netherlands and the United States, though there are works published in the Caribbean itself as well as other European countries. Most of the works are in English, approximately 250 are in French, and a small number are in the other languages of other Colonial powers that controlled parts of the Caribbean. 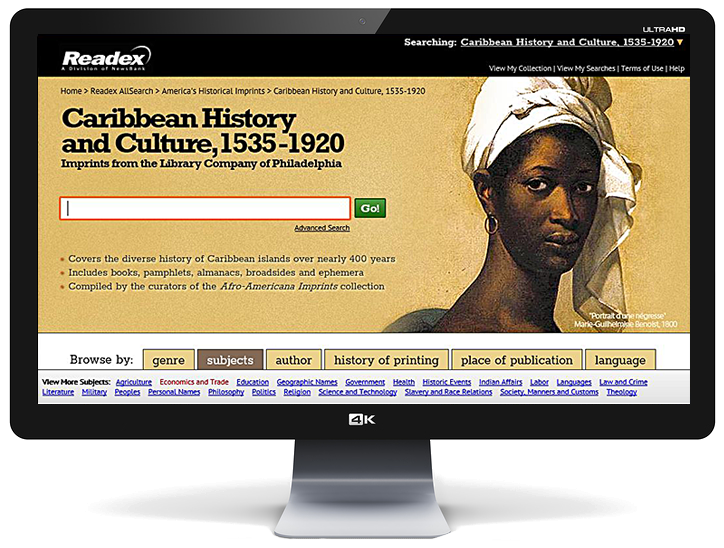 “…richly diverse…”
“...a wonderful gift for all researchers seeking to better understand the history of the Caribbean.” 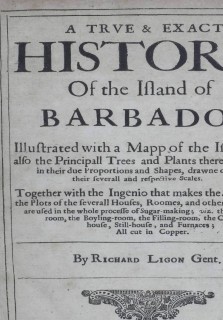 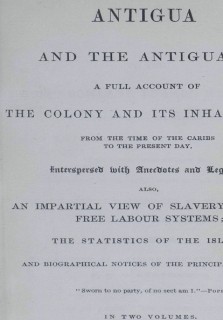 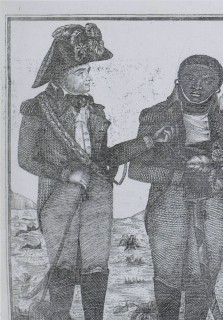 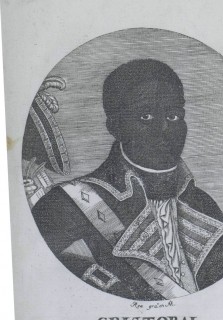 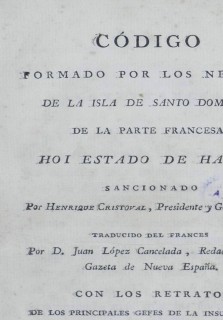 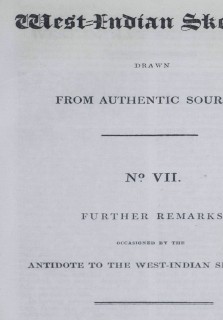 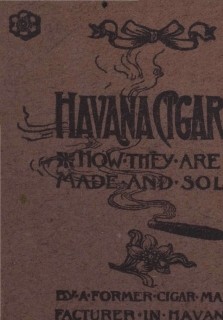 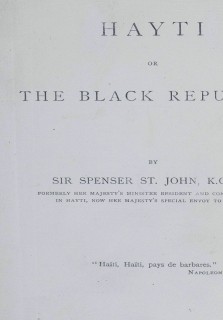 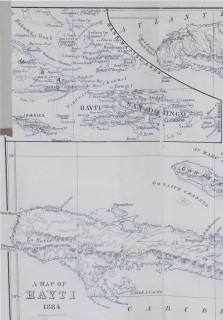 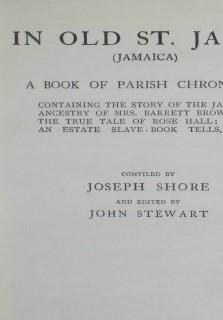 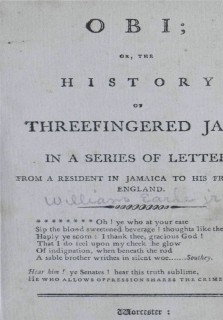 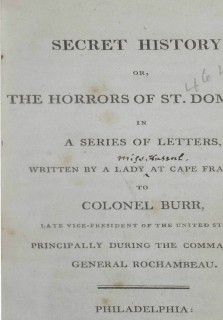 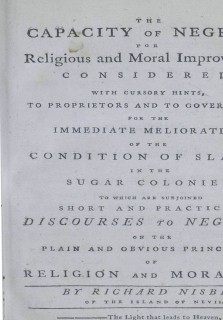 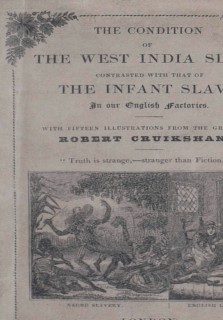 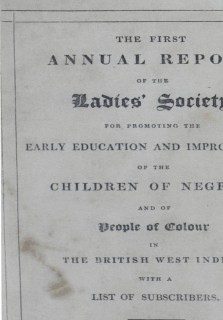 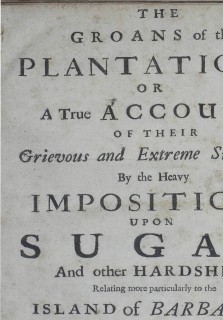 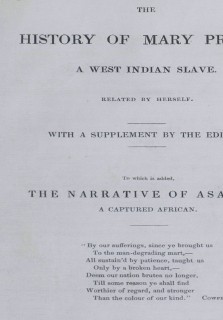 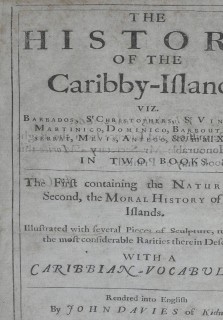 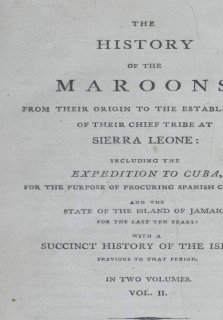 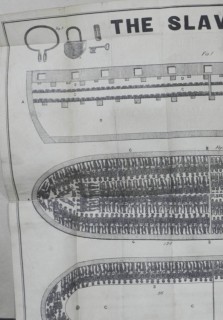 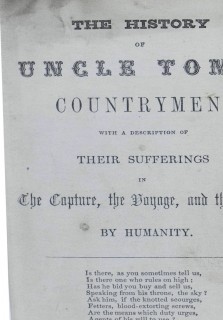 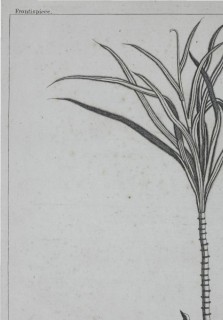 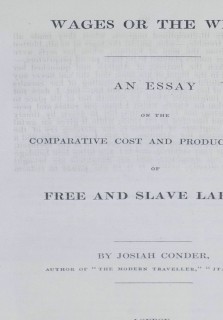 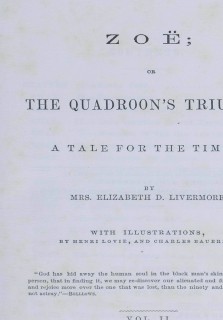 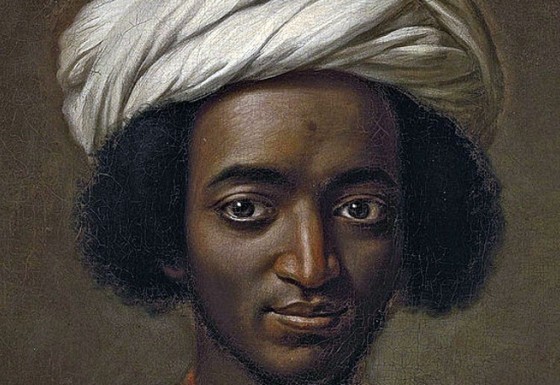 A comprehensive primary resource for studying this important group of islands 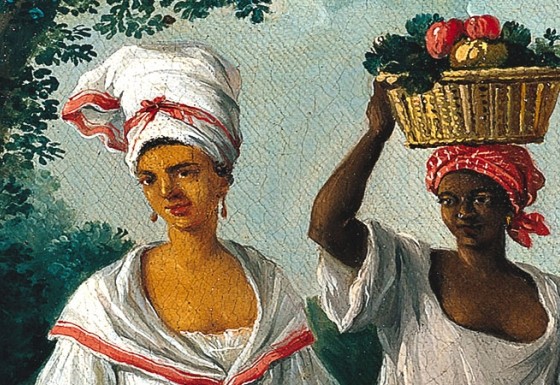 “Many resources are devoted to African American history and culture, but few offer the archival detail of Afro-Americana Imprints, 1535-1922….a multifaceted file for students and researchers of all types.

“…the new interface…is a significant improvement in terms of usability and function. Clearly labeled "browse by" options are in the middle of the page and include genre, subjects, author, history of printing, place of publication, and language. The purposely large boxes are easy to read, meaning patrons should be able to navigate them with ease.”
— Library Journal (June 1, 2015)

“Caribbean History and Culture, 1535-1920, provides a treasure trove of documents: richly diverse in form and content, useful for cultural, social and political history, and offering perspectives not available in other collections. The digitization of these materials from the Library Company of Philadelphia is a wonderful gift for all researchers seeking to better understand the history of the Caribbean.”
— Laurent Dubois, Marcello Lotti Professor of Romance Studies and History, Duke University, and author of Avengers of the New World: The Story of the Haitian Revolution (2004)

“Caribbean History and Culture, 1535-1920: Imprints from the Library Company of Philadelphia offers Atlantic world scholars and historians of the Early American Republic a vital tool to examine with greater scrutiny Caribbean colonies, nations, and people that made an important impact on politics, economies, religions, and cultures in the Atlantic world. One the collection’s true strengths is its geographic breadth: in more than 1,200 imprints it covers nearly all of the Caribbean from local, European, and American perspectives between the mid-sixteenth century to the early-twentieth century. The diverse language offering of the imprints (including Dutch, German, Italian, French, Spanish, and English) is another valuable tool for researchers. For scholars of Haiti, the database holds a myriad of French and English language imprints from the Old Regime, Revolutionary Period, and Independence throughout the nineteenth century. The collection’s holdings of novels, nonfiction works, memoirs, travel literature, and government documents will be of great importance to researchers interested in slavery, gender, religion, independence movements, migrations, social movements, military actions, and political transitions.”
— Ronald Angelo Johnson, author of Diplomacy in Black and White: John Adams, Toussaint Louverture, and Their Atlantic World Alliance

“There is simply no rival for this vast array of searchable books in English, French, and Spanish, which include both contemporary bestsellers and lesser-known works.  Caribbean History and Culture, 1535-1920, will be an indispensable tool for students and scholars of the Greater Caribbean, the Atlantic World, Latin America, and Early (North) America.”
— Wim Klooster, Professor and Chair, Department of History, Clark University

“Caribbean History and Culture, 1535-1920, is a one-of-a-kind resource for students and scholars of Caribbean studies. It will also be invaluable for those researching the circulation of people, goods, ideas, and capital between the Caribbean and port cities in the United States. Plantation management manuals, natural histories, travel narratives, and other imprints in this series have proven to be fruitful for mining under-utilized sources about subjects such as race, gender, family, the history of medicine, and comparative slavery and emancipation in the Americas. Atlantic World, hemispheric studies, and print culture are just a few of the fields that will be enriched by this collection.”
— Krystal Appiah, Curator of African American History, Library Company of Philadelphia

1684London, EnglandBucaniers of America: : or, A true account of the most remarkable assaults committed of late years upon the coasts of the West=Indies, by the bucaniers of Jamaica and Tortuga, both English and French ... especially, the unparallel'd exploits of Sir Henry Morgan, our English Jamaican hero ...Exquemelin, A. O. (Alexandre Olivier)

1803London, EnglandPractical rules for the management and medical treatment of Negro slaves, in the sugar colonies.Collins, Dr.

1803London, EnglandThe history of the Maroons, : from their origin to the establishment of their chief tribe at Sierra Leone: : including the expedition to Cuba, for the purpose of procuring Spanish chasseurs; and the state of the island of Jamaica for the last ten years: with a succinct history of the island previous to that period. : In two volumes.Dallas, Robert Charles, 1754-1824.

1803London, EnglandBuonaparte in the West Indies; or The history of Toussaint Louverture, the African hero. Part II.Stephen, James, 1758-1832.

1805London, EnglandAn historical account of the black empire of Hayti: : comprehending a view of the principal transactions in the revolution of Saint Domingo; with its antient and modern state.Rainsford, Marcus, fl. 1805.

1806London, EnglandThe trial of Thomas Picton, late governor of Trinidad ... : for inflicting the torture on Louisa Calderon, by suspending her by the wrist to the ceiling, without any resting place, except a sharp spike for her toe : Tried at Westminster ... on Monday, Feb. 24, 1806. and found guiltyPicton, Thomas, Sir, 1758-1815 defendant.

1824New York, N.Y.Information for the free people of colour, who are inclined to emigrate to Hayti..Society for Promoting the Emigration of Free Persons of Colour to Hayti.

1829 The life and adventures of Olaudah Equiano; or, Gustavus Vassa, the African. : From an account written by himself. Abridged by A. Mott. To which are added some remarks on the slave trade, etc..Equiano, Olaudah, b. 1745.

1834London, EnglandAn account of the present state of the island of Puerto Rico. : Comprising numerous original facts and documents illustrative of the state of commerce and agriculture, and of the condition, moral and physical, of the various classes of the population in that island, as compared with the colonies of other European powers; demonstrating the superiority of the Spanish slave code,--the great advantages of free over slave labour, &c.Flinter, George Dawson, d. 1838.

1837London, EnglandThe West Indies: : the natural and physical history of the windward and leeward colonies; with some account of the moral, social, and political condition of their inhabitants, immediately before and after the abolition of Negro slavery:Halliday, Andrew, Sir, 1781-1839.

1841 Argument of John Quincy Adams, before the Supreme Court of the United States : in the case of the United States, appellants, vs. Cinque, and others, Africans, captured in the schooner Amistad, by Lieut. Gedney, delivered on the 24th of February and 1st of March, 1841. With a review of the case of the Antelope, reported in the 10th, 11th, and 12th volumes of Wheaton's Reports.Adams, John Quincy, 1767-1848.

1848London, EnglandAn historical and statistical account of the Bermudas, : from their discovery to the present time.Williams, William Frith.