I am finishing a history of antebellum black politics, a little-studied topic for which many of the usual sources are unavailable: white politicians did not record their correspondence with black men, and the latter rarely donated personal papers to libraries, for obvious reasons. However, America’s Historical Newspapers (AHN), used with precision, can produce extraordinary insights into the quotidian fabric of American politics and culture, evidence otherwise unavailable. 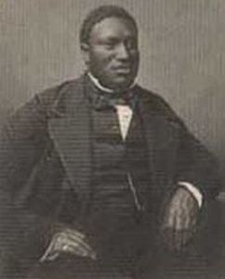 Three examples illustrate its unique capacities.  First, AHN can be extremely productive in combination with another archival base—the decennial manuscript census of the U.S. The latter can be searched online to locate name, state, county, and municipality going back to 1790 (I use archives.com, but there are other genealogical databases).  Prior to 1850, the information is very limited, in that only heads of households were named, with numbers of household members distributed by sex and age range; race is indicated in various ways. Starting in 1850, however, much more information is available: full names of all family members, house numbers, exact ages, employment, real property, literacy, place of birth, and more. The census, combined with hundreds of individual name searches in AHN, has allowed me to construct a prosopography of the black political class in Portland, Maine; New Bedford, Massachusetts; Bucks County, Pennsylvania; and Providence, Rhode Island.

Searching for all possible varieties of names (not just “William” but “Wm.,” for example, or with and without middle initials) generates evidence of local office-holding, of party committee positions (in the Whig, Liberty, Free Soil, and Republican organizations), of confrontations at the polls and court cases. (See the inserted article below recording A.W. Niles as one of nine “Tythingmen,” whose job it was to enforce Maine’s stringent blue laws).  The census clarifies the occupations, origins, and worth of such men, often at odds with conventional scholarly wisdom about the Northern free people of color. It also clarifies whether a particular individual was “of color.” Often, a newspaper article will not indicate whether a particular man was black or “mulatto.” A series of names will have to be checked in the census, over multiple decades, since the census merely records what a particular enumerator considered someone’s phenotype or what the enumerator was told, with zero consistency. For instance, without the discovery of a single page in Portland’s 1820 census listing all of the colored heads of households (but with no mention of race), I would never have discovered that various men recorded in minor city offices during that decade, were, in fact, men of color. 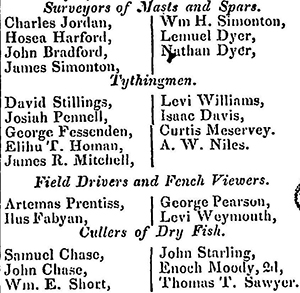 A second unique feature of AHN is how it documents the extraordinary echo chamber of the antebellum press.  Most newspapers then functioned by reprinting stories from other papers from around the country.  Certainly, a few played special roles nationally or regionally (e.g. Niles’ Register, the New-York Journal of Commerce, or the Richmond Enquirer) and in any given year there was an “Administration” organ, representing the views of the party controlling the White House.  But newspapers in every part of the country exchanged with others, often from far away and to whom they might be violently opposed. Garrison’s The Liberator, for instance, exchanged with about one hundred other papers, and was routinely reprinted in the Deep South.  The purpose of all this collecting, clipping, citing, and copying was simple: human interest, outrage to stoke sectional and party fervor, whatever would catch the eye. One can gauge the effect of a particular event by how local coverage was reprinted (and commented on) in neighboring states, and sometimes in other regions.

A good example of the newspaper echo chamber is seen the first time a black man passed the bar: Macon B. Allen, in Portland, Maine, in 1844.  Obviously this event had local significance, and was heavily covered in Maine, but those stories were reprinted all over New England and beyond, in the Pittsfield Sun, North American and Daily Advertiser (Philadelphia), Boston Evening Transcript, Cape Ann Light, New York Commercial Advertiser, Boston Weekly Messenger, Vermont Phoenix, Times-Picayune, Providence Journal, Portsmouth Journal of Literature and Politics, Niles’ Register, Poughkeepsie Journal, and the Auburn Journal and Advertiser. Short of visiting innumerable archival repositories, combing through dozens of different newspapers over many weeks, these tiny nuggets accruing into a coherent fact—that the fact of a black lawyer had real impact—would remain invisible.  Similarly, the 1858 state convention of colored men called by New Bedford’s black vanguard is well-known in abolitionist history, but coverage in Tammany Hall’s organ, the New-York Herald, with a headline reading “Grand Rally for Freedom of the Colored Citizens of Massachusetts-Mass Convention of Niggers to Consider their ‘many Grievances’” makes its impact considerably larger. 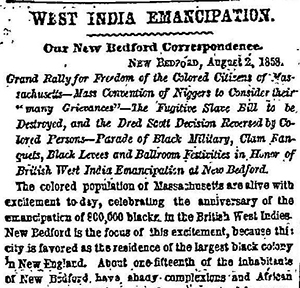 Finally, AHN facilitates comprehension of idiom: the literary tropes, contemporary cultural referents, jokes, invective, and shorthand allusions that constitute political discourse but are unavailable to us two centuries later.  It is not enough to search the word “nigger,” for instance.  One needs to know that well into the nineteenth century, there was no agreed-upon spelling—it might be “negur” or “neger” or “neegur,” and even decades later, it was widely understood that Irish immigrants pronounced it as “nager,” sometimes reproduced as “na-ger.” I have tracked the polarization between this despised immigrant group and native-born citizens of color via other whites commenting on Hibernian Negrophobia through invoking that idiom. 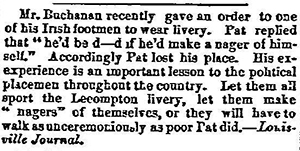 Another important variety of slang is the constant use of “sable” and “ebony” to denote persons of African descent, often but not always with a pejorative intent. Prince Hall was the first black political operative, noted as early as 1788 as leading men of color to vote in Boston, and an adroit maneuverer between Federalists and Republicans in subsequent decades.  Searching “Prince Hall” will produce useful results, but one also needs to search for “the sable Prince.” Another trope is the witches’ chant from Macbeth (“Black spirits and White,/Red spirits and Grey,/Mingle, mingle, mingle,/You that mingle may”), used for decades to signal, and sneer at, interracial politicking.

Without access to America’s Historical Newspapers, it would have been much harder for me to challenge a widely accepted historiographical certainty—that there was no such thing as black politics between the Revolution and the Civil War, or at best, little more than random exceptions. AHN helps us do what historians are supposed to do: excavate the minutiae of ordinary life, and assemble enough evidence to substantiate new thinking.

Van Gosse is Chair of the Department of History at Franklin & Marshall College. He has published extensively in post-1945 history, including Where the Boys Are: Cuba, Cold War America and the Making of a New Left (1993) and Rethinking the New Left: An Interpretative History (2005). His work on antebellum black politics began with an article in the October 2008 American Historical Review titled ‘As a Nation, the English Are Our Friends’: The Emergence of African American Politics in the British Atlantic World, 1772-1861.