The Charles Brockden Brown Electronic Archive and Scholarly Edition is currently preparing for its archive nearly 900 periodical texts, many of which were published anonymously or under a pseudonym. Our goal is to identify these texts, and make them available electronically in the archive. During the course of locating Charles Brockden Brown’s political pamphlets on the Louisiana Purchase (1803) and Jefferson’s Embargo (1807), I first came to use the four Archive of Americana collections of Early American Imprints. That initial encounter with Early American Imprints, Series II and its Supplement from the Library Company of Philadelphia (LCP) would lead me to incorporate its companions—Early American Imprints, Series I and its Supplement from LCP—into my online ENG 5009 Bibliography and Research class and to explore how all four series can complement the assignment on library research tools. 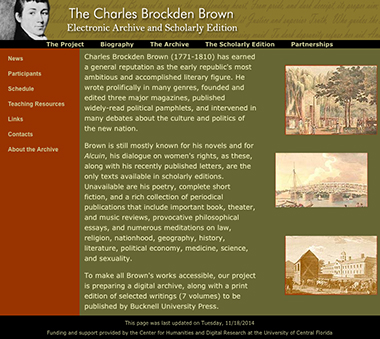 In teaching this online course, one of my goals has been to immerse graduate students in the research process, specifically by engaging them in a series of four different learning exercises. The first assignment, an essay on literary fields and critical approaches, asks students to position themselves amid literary period or genres along with contemporary theory. In the second assignment on library research tools, both in print and digital format, students answer detailed questions about authorship or publication history. For the third assignment students prepare an annotated bibliography on a topic of interest, learning how to locate materials and annotate them. The final assignment is a collaborative editing assignment in which students work in teams to transcribe, edit, and annotate an 18th-century manuscript letter.

It is, however, in their second assignment on library research tools that students learn to use various databases alongside one another, including Early American Imprints, to answer research questions. For instance, in the first part of the assignment, students are asked to explain the purpose of the Oxford English Dictionary, Early English Books Online (EEBO), National Union Catalogue of Pre-1956 Imprints, and other indexes and databases. They also must locate a specific reference in each. Among these is Early American Imprints, Series I: Evans, 1639-1800, which students learn has over 36,000 books, pamphlets, broadsides and rare printed materials on topics ranging from agriculture and auctions to literature, music, religion, and foreign affairs, i.e., “virtually every book, pamphlet, and broadside published in America during the 17th and 18th centuries.” The database is searchable, they learn, by author, title, genre, key word, subject, language, and place of publication. By comparing such library research tools alongside one another, students become familiar with the scope and function of each, along with whatever limitations they may have. In class, it is useful to examine the numerous genres that Early American Imprints contains—alphabet rhymes, book prospectuses, cookbooks, erotica, house blessings, imaginary voyages, lottery tickets, plays, sermons, treaties, etc.—so students can appreciate the range and amount of materials available in full text. 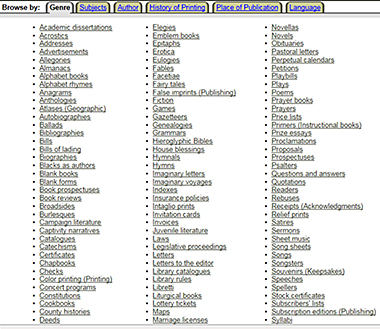 In the second part of the assignment, students engage a series of topics ranging from the meaning of the word “sex” in 1790s England, to the number of reviews published about Willa Cather’s A Lost Lady (1923), to the publishing histories of The Whole Duty of a Woman in England and then in America. In this part of the class, I also ask students to record their research steps to demonstrate how they developed their final answer—a task that requires full engagement with Early American Imprints.

Students are asked the following question: Who appears to write “An Address to the Farmers of Pennsylvania,” and what year was it published? What institutions in Philadelphia own it? How many copies does one of them have, and whom do they list as the real author (rather than a pseudonym) in their collection? In answering the question, students are asked to get as close to the primary source as possible to confirm their information.

Student responses vary, but typically begin with use of Google or WorldCat to locate answers. Some students figure out through WorldCat that James Ross (1762-1847) wrote the campaign pamphlet in 1808, and that it can be located in the Library Company of Philadelphia’s online catalogue WolfPAC.  Once there, students learn that the pseudonym “Agricola” is associated with the text and that two copies are present, one of which belongs to the Historical Society of Pennsylvania. More adept students figure out that further steps are necessary in order to be thorough, and search the Historical Society of Pennsylvania catalogue. There they learn that two more copies are housed.

The use of Early American Imprints, Series II, enables students to further document their answer by viewing a digital copy of the primary text itself.  As with Early American Imprints, Series I, the range of genres here is far-reaching. But upon searching for the text, one learns that the 16-page pamphlet is indeed authored by “Agricola” and that the pamphlet’s “Document Source,” i.e., location it was scanned, is the Library Company of Philadelphia. These are both important elements to validate since stopping one’s search with Google or WorldCat can often lead to incomplete information.  While an introductory level bibliography and research class can stop here, more advanced courses in early American literature might ask students to analyze “addresses” in general or as a genre, or to drill down on the pamphlet itself alongside the political rhetoric of the day about the economics and morality of Jefferson’s Embargo.

In sum, students with access to Early American Imprints, Series I, Series II, and the two Supplements from the Library Company of Philadelphia will have the opportunity to learn more about how America’s historical imprints have been catalogued and digitized. They will also learn the usefulness of accessing full-text reproductions of a given text in order to confirm bibliographical information and source content.  In today’s online teaching and learning environment, where one relies on search engines to produce complete or comprehensive results, the ability to think analytically and to thoroughly confirm source materials is an equally important lesson about research processes—and accuracy.

Mark L. Kamrath is General Editor of The Charles Brockden Brown Electronic Archive and Scholarly Edition and Associate Director of the Center for Humanities and Digital Research. He teaches early American literature to 1865, the American novel to the Civil War, Native American literature, and courses in bibliography and research as well as digital humanities. He has served as an MLA Committee on Scholarly Editions Inspector, and as a grant panelist for the National Endowment for the Humanities Scholarly Editions Grant program. He is currently on the Executive Council and Americanist Board of NINES (A Networked Infrastructure for Nineteenth-Century Electronic Scholarship). He is developing with Philip Barnard (University of Kansas) and others an XML-based archive of all Brown's writings that incorporates TEI (Text Encoding Initiative) standards. He recently co-edited the Letters and Early Epistolary Writings, Volume 1 of the Collected Writings of Charles Brockden Brown (2013), Bucknell University Press. He also is developing Digital Archiving Resources: an initiative for building, using, and preserving digital archives.