Some phrases have become common expressions because the works in which they appear were printed repeatedly in diverse publications. That is the only way they could have entered into such widespread popular usage. Such a phrase is “We hold these truths to be self-evident, that all men are created equal,” and in a splendid bibliography Stephen M. Matyas, Jr., has traced its dissemination up through 1825.[i] 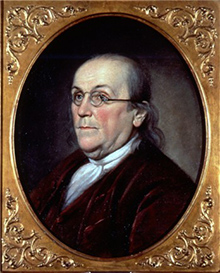 “Early to bed, and early to rise, makes a man healthy, wealthy, and wise”; “Lost time is never found again”; “No gain, without pain”—these are other phrases that are part of our language, still seen by parents and grandparents as common-sense words of wisdom, maxims worthy of being instilled in the younger generation. 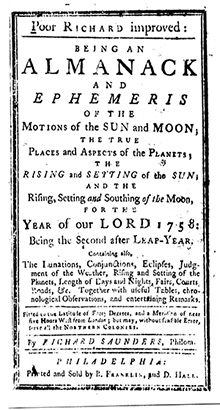 To realize such influential texts must have been broadly disseminated over many decades is one thing. To document their dissemination is another. Once the task was nearly impossible because such short texts were—from our angle of vision—“buried” in newspapers, periodicals, popular biographies, histories, school readers, advice manuals, and the like. To contemporaries, these “buried” texts were inescapable because of the diverse ways in which they were published. Now, thanks to digitization, we can see why earlier Americans repeatedly ran across them, sometimes even taking them in orally as well as visually. Newspapers were, after all, sometimes read aloud, and children’s books certainly were. 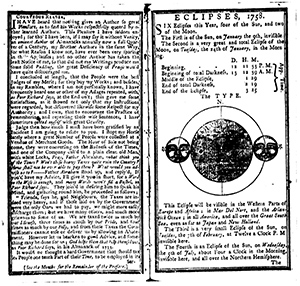 Benjamin Franklin’s “The Way to Wealth” was first published as the untitled preface to Poor Richard’s Almanack for the year 1758. It has hitherto not been known that “The Way to Wealth” deserves to take its place, along with the Declaration of Independence and the Constitution, as one of the three foremost American texts of the eighteenth century. However, recent bibliographical work—to a considerable extent based on digitization—shows how profoundly it has shaped not only Americans, but also others around the world.

About 1,200 appearances have been found in 25 languages up to 1850.  In the United States, it appeared more than 300 times, about 40 times in newspapers, and the numbers will grow in future decades, as digitization progresses.

“The Way to Wealth” was not really about wealth as we think of it today. Its message was about how to accumulate enough to have material security, personal independence, and social respectability. The means to do so were basically hard work and frugality. Franklin’s text, largely consisting of maxims of Poor Richard within the framework of a simple story, was about how to get along in this world. It has been termed the source of the American dream, because Franklin, through this text and the example of his own life, showed that if you lived by Poor Richard’s maxims, you would get ahead. Success was in your own hands. Europeans believed “The Way to Wealth” had shaped the character of the American people more so than any other printed work. 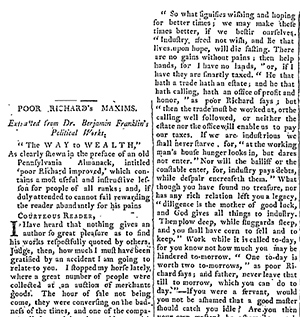 Because Franklin’s text was published throughout the country, not just the Northeast, it is possible to speak broadly of its impact on American people. As early as 1771, it appeared in a Virginia almanac, and in 1793 made its first appearance in a Southern newspaper, the State Gazette of South Carolina, March 8 and 11, 1793. New England predominates in terms of the number of appearances, but Franklin’s text appears once again in the almanac for 1801 published in Halifax, North Carolina. The text began its march West in a Pittsburgh, Pennsylvania, almanac for the year 1811. 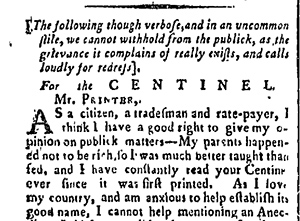 Thanks to Early American Newspapers, Series 1 to 10, influence can also be measured in ways other than appearances of the full text. In the 1780s, individual maxims begin to be quoted to reinforce a message, but, also, the character of Poor Richard himself is used to make a point. The first instance was in the Massachusetts Centinel, Boston, of August 30, 1786, and less than three years later one finds “Poor Richard” as an advice giver in the “Mechanics’ Song” in the Hampshire Gazette of Northampton, Mass., February 11, 1789.  Not long after that, in 1793, copies of the song “Poor Richard” are advertised in Dunlap and Claypoole’s American Daily Advertiser, Philadelphia.  For decades the number of references to Poor Richard increases.

A version of the bibliography is being digitized and will become available as a database. It is anticipated that the entire bibliography will also appear as a book. With the bibliography it will be possible for others to explore the significance of different forms of “The Way to Wealth,” to trace its appearance before and after Franklin’s death in 1790, and to consider the different messages it conveyed by different titles and by such details as whether Franklin is identified as the author.

The bibliography will not, however, be the final guide for exploring the impact of “The Way to Wealth.” Although the bibliography will demonstrate how this text helped shape  our common culture, it is also likely to stimulate others to probe ever more deeply into this phenomenon, perhaps using new digital techniques to gain insight into reading and cultural influence that transcend Franklin’s seminal text.

Ken Carpenter held numerous positions in the Harvard University Library. From 1968 to 1980, he was curator of the Kress Collection at the Harvard Business School, a collection of pre-1850 business and economic literature. In his last position, he was editor of the Harvard Library Bulletin. The bibliography of “The Way to Wealth” is among the scholarly projects that Ken is carrying out in retirement.