African American Education and Postbellum Ambivalence: A Look at the Relationship between the Presbyterian Church and Lincoln University
Elizabeth Freeman

Black and White women during the U.S. antebellum period participated in abolitionist and social activist work through a variety of organizational outlets. One of those outlets was the 1837 interracial Anti-Slavery Convention of American Women, documents of which—Proceedings of the Anti-Slavery Convention of American Women (1837) and An Appeal to the Women of the Nominally Free States Issued by an Anti-Slavery Convention of American Women (1837)—appear in Readex’s online collection Afro-Americana Imprints, 1535-1922: From the Library Company of Philadelphia.  Understanding how women from racially diverse backgrounds worked together toward social change in the U.S. could serve today as an illuminating example for students concerned with racial discord and interracial relations in our nation, both then and now.  Afro-Americana Imprints gives us the opportunity to look back at these particular documents and analyze them for useful activist strategies for working toward progressive social change—negotiation of interracial relations, strategies of self-representation, representations of others—but also for missteps, including cultural miscommunications. These two documents, among the thousands available in this online collection, can help us strengthen ways we engage in meaningful and effective interracial work. Moreover, they can enrich our opportunities to enact significant changes to our contemporary activism(s). 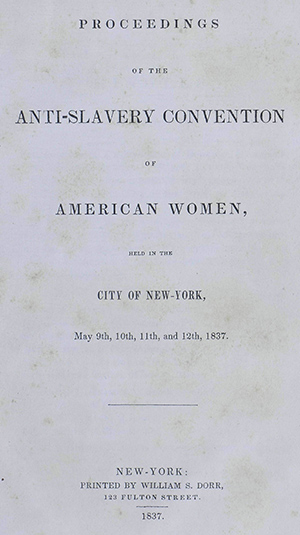 Proceedings (1837) and An Appeal (1837) form the foundation of the following two-to-three week activism unit geared toward a first-year college course, which could be used in Composition, Literature, History, Social Science, Women’s Studies, and Multidisciplinary classrooms. As records of antebellum women’s activist work, these two documents can teach students about antebellum activism; help them to identify, learn from, and appreciate different models of interracial activism; and encourage them to use their new understandings to formulate their own contemporary models of activism. 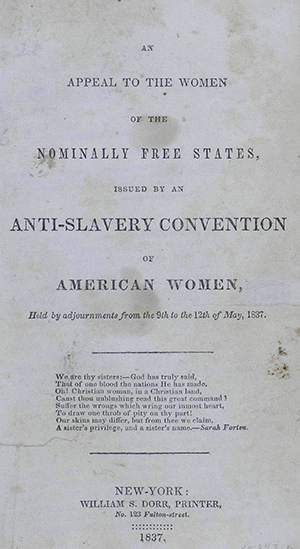 In addition to the two Afro-Americana Imprints documents, we also include in this classroom unit both Anna Julia Cooper’s 1892 essay “Woman versus the Indian” and a contemporary TED Talk, How to Combat Modern Slavery (2010). One of the ways to examine a text is by comparing or contrasting it with another text that performs a similar function or speaks to similar issues.  Cooper’s essay provides critical terms that can help students to reexamine the 1837 Proceedings and Appeal, and better comprehend the successes and failures they document in interracial relationships between participating women.  The contemporary TED Talk helps students to critically analyze the political activism of the 1837 documents through instances of current social change activism. Together, these two additional documents empower students to discern how activism unfolds across points in time, specifically in 1892 and 2010. 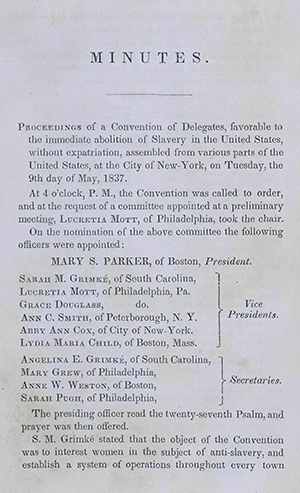 In 1892, Cooper coined the term “whimodaughsis”—a mixture of the words White, wives, mothers, daughters, and sisters—to expose the racial exclusivity of the U.S. women’s club movement, most certainly a fault line in the movement’s progress. Politically active white women in the club movement claimed to speak for all women—wimodaughsis—while simultaneously excluding Black women, Cooper argued.  Her term “whimodaughsis” revised the accepted term wimodaughsis, and exposed the white supremacist underpinnings in white women’s political activisms. Cooper’s signifying revision can help today’s students understand the vexed relationship between White women and Black women at the 1837 Convention. Cooper’s essay also gives students an opportunity to compare and contrast her representations of interracial activism, Black women, and White women with that of the 1837 Proceedings of the Anti-Slavery Convention of American Women.

Students should read before class both the Proceedings and Cooper’s essay. Divide the class into small groups.

One set of groups should:

A second set of groups should:

A third set of groups should:

A concluding discussion for the full class might focus on ways Cooper’s essay contributes to our understanding of race, class, and gender dynamics during the 1837 Convention. What implications do the Proceedings have for contemporary U.S. life now? What impact might Cooper’s essay have on contemporary social change activism(s), especially among women (and) students?

This activity prompts students to think about the effect of different (self-) representational strategies in the context of interracial social change activism. Students should locate a passage in “Woman versus the Indian” in which Cooper defines one of the key terms from the following list. Students should write for 10 minutes about ways Cooper’s definition of the selected term compares to, contrasts with, or informs the 1837 Proceedings. 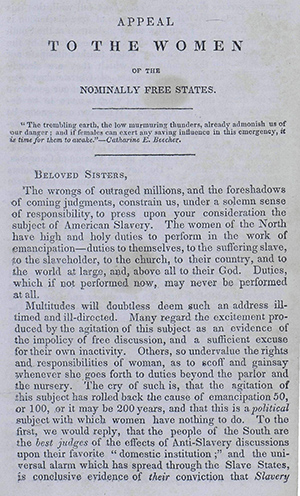 Students will examine both the Appeal and the TED Talk, How to Combat Modern Slavery. The document and video will help engage students in a discussion about abolitionist and modern activisms, and the assignments will encourage them to develop their contemporary activist identity. Students should read the Appeal before class. While watching the video in class, students should note any similarities or differences between the video’s contemporary model of social activism and the model of activism presented by the Appeal, focusing on the barriers faced by the different activists. Students should discuss their findings.

After the film viewing and large-group discussion, divide students into groups. Each group should research an example of modern-day slavery, or similar political or social cause (e.g., mass incarceration), and begin writing their own appeal to advocate for change. Students’ presentation of their appeals must include visual or audio aids (e.g., song, poem, artwork) to help strengthen their argument. Students’ appeals should also include some kind of action plan (e.g., write letter, start Facebook or Twitter page, start petition) to show how they will advocate beyond the classroom for their chosen cause.

Black and White women during the antebellum period made many efforts to abolish slavery and address racial discord in the U.S., and two particular documents from Afro-Americana Imprints—Proceedings (1837) and Appeal (1837)— record those activist efforts. These documents can be a beneficial source of learning for students in contemporary college classrooms who likely have particular feelings about racial difference, racial discord, and racialized violence. Educators have the opportunity to shape how students respond to and make sense of past and present instances of these issues. Students are asked to read and analyze the two 1837 documents in order to identify both helpful and harmful steps in these interracial activist models so that they can make changes in the ways they engage in activism today, especially in cross-racial contexts. Students are then given the opportunity to apply the knowledge gained from reading antebellum activist texts to their contemporary activist contexts, which they can then understand and engage in more effectively.

Anti-Slavery Convention of American Women. An Appeal to the Women of the Nominally Free States Issued by an Anti-Slavery Convention of American Women, Held by Adjournments from the 9th to the 12th of May, 1837. New York: William S. Dorr, printer, 1837. America’s Historical Imprints: Afro-Americana Imprints, 1535-1922. Readex, 2015. Web. 25 Feb 2015.

Cooper, Anna Julia. “Woman versus the Indian.” 1892. We Must Be Up and Doing: A Reader in Early African American Feminisms. Ed. Teresa Zackodnik. Toronto: Broadview Press, 2010.