Rivers Run Through It: The U.S. Congressional Serial Set and Its Maps
Christine Kelly-Terena

Reading Between the Lines: Rediscovering the Home of a Founding Father
Lisa M. Minardi

How Libraries Can Win in Today's Web 2.0 Environment
Terry Reese

Reading Between the Lines: Rediscovering the Home of a Founding Father 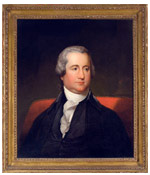 In 2004, the Pennsylvania home of Frederick Muhlenberg (1750-1801)—first and third Speaker of the U.S. House of Representatives—was saved from the wrecking ball by a grassroots effort. The Speaker's House, as it is known today, was built in 1763-64 and is located in the historic colonial village of Trappe, Montgomery County. Together with two acres of grounds, this landmark was saved by a non-profit organization bearing the house's name. Since its heroic success in rescuing the property, The Speaker's House has undertaken an intensive effort to research both Muhlenberg himself and the house's complex evolution over time. Using archival, architectural and archaeological evidence, the organization has sought to understand how the building looked and was used during Muhlenberg's occupancy.

Volunteer researchers have undertaken an intensive study of deeds, tax lists, census and probate records and Muhlenberg family papers, in particular the voluminous journals and correspondence of renowned Lutheran minister Henry Melchior Muhlenberg (1711-1787), Frederick's father and nearest neighbor. A vital part of the archival research effort was aided by the digitized newspapers available in America's Historical Newspapers. Articles found in the database have provided invaluable clues to the house's past. 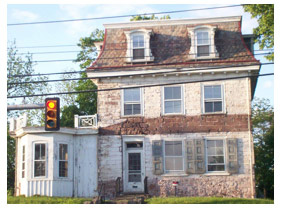 After preliminary archival research determined the chain of title for the property, America's Historical Newspapers was searched for more information about its various owners. Newspaper advertisements revealed that a number of sheriff sales were held at the property when the house—one of the largest and finest dwellings in the area—was in the possession of John Schrack, its builder and earliest owner. This information is in keeping with Schrack's status as a prominent local citizen as well as the house's suitability for public assembly.

Numerous articles directly related to Frederick Muhlenberg were also found—many of them having to do with his political offices—as well as with the house itself, which he owned from 1781 to 1791. New discoveries were made that shed light on Muhlenberg's various commercial enterprises, which included building a general store on the Trappe property and becoming a partner in a Philadelphia sugar refinery.

Researchers had learned from the journals of Henry Melchior Muhlenberg that in early 1782 carpenters were working to build a store on Frederick's property. Because Henry documented purchases of everything from sugar and coffee to petticoats and candles, the journals also provide an excellent record of what was sold in the store. In addition to this information, the 1798 Direct Tax List records describe the store as a stone building measuring 20 by 30 feet. The exact location and configuration of the store remained a mystery, however, until the discovery of an advertisement published in 1799 by Francis Swaine, owner of the property at the time. Swaine was married to Frederick's sister Mary and had bought the property from him in 1791. The Swaines evidently had decided to rent the store, which was described in the ad as a "large convenient store with two rooms and a kitchen…It is an excellent stand for business."

This is the earliest newspaper advertisement of the Speaker's House property found to date. Because the store was demolished in the mid-1800s, this advertisement provides a vital description of the store's interior arrangement, which was apparently suitable for serving as a private residence. From the description of the store as having two rooms and a kitchen, it can be inferred that the building had at least one chimney, presumably with a cooking fireplace in one room and possibly a stove arrangement to heat the store. Because Frederick Muhlenberg is known to have employed clerks (at least one of whom was married) to run the store's day-to-day operations, the store's ability to function as an independent dwelling probably meant that the clerk and his family lived in the store building and not the main house.

The newfound description of the store was then combined with other discovered evidence to form a more complete picture of this long-gone structure. An early 1900s memoir was found that recalled a store attached to the house's east side in the 1830s, which was corroborated by architectural clues on the house's interior. Archaeology conducted in 2007 revealed a stone building foundation in this vicinity, with dimensions closely approximating those of the tax list and artifactual evidence consistent with a store. Further proof was obtained when stucco was removed from the east wall of the house in April 2008, revealing the roofline of the former store for the first time in a century or more. Rarely does one find a more perfect example of evidence coming together—including archival, architectural and archaeological—to form such a complete picture of the past. 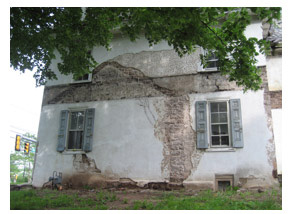 America's Historical Newspapers proved to be a treasure trove of informative for researchers seeking to document the history of the Frederick Muhlenberg house. Though physical evidence in the form of architectural and archaeological clues is paramount, newspaper records may also serve as a powerful tool when studying local historical buildings. Today, accessing those records is easier than Muhlenberg and his contemporaries could ever have imagined.

Lisa M. Minardi is a leading scholar of the Muhlenberg family. Minardi wrote a study of the family for her undergraduate thesis at Ursinus College and an architectural study of their three 18th century houses in Trappe, Pennsylvania for her master’s thesis in the University of Delaware-Winterthur Program in Early American Culture. In addition to serving on the board of The Speaker’s House and chairing its restoration committee, Minardi is the assistant curator of furniture at the Winterthur Museum, where she is working on a major exhibition and publication on southeastern Pennsylvania furniture for 2011. To learn more about Frederick Muhlenberg or The Speaker’s House, please visit http://www.speakershouse.org/