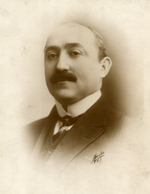 When I began work several years ago on my in-progress biography of William Fox (1879–1952), founder of Twentieth Century Fox, I knew I was in for trouble. Although Fox was arguably the most important of all the early movie moguls because of his foundational contributions to the art, technology and business of movies, he seemed to have largely disappeared from history. No serious biography of him yet existed, and most movie history overviews made only scant, passing reference to him. Personal papers? Fox left none. Studio archives? Successive management regimes threw away almost everything except minutiae from Fox's regime—keeping extras' contracts and the like, but none of the founder's correspondence or business files. As if all that weren't bad enough, the general field of early film history, especially from 1900 through the mid-1920s when Fox was highly active, was woefully under-cultivated. No wonder no one had ever written a William Fox biography.

Still, there seemed to be good reasons to try. Through my 15-year friendship with Fox's niece, the late Angela Fox Dunn, I'd heard many lively stories about "Uncle Bill" and had learned about his staggering list of accomplishments. With tireless energy and prescient vision, Fox put an indelible stamp on the form and content of American motion pictures. It was Fox who laid the foundation for the Hollywood studio system by launching and largely paying for the U.S. Department of Justice antitrust lawsuit that in 1915 formally dissolved the monopolistic Motion Picture Patents Company: after that, anyone could legally make movies. In the mid-1910s, he created the screen's first brand-name sex symbol, Theda Bara, and made the world's first million dollar movie, A Daughter of the Gods. When World War I broke out and leading European film producers were forced to abandon their foreign markets, Fox led worldwide expansion of the American movie industry. During the 1920s, he developed sound-on-film technology, which remains the industry standard, gave important early career breaks to directors John Ford and Howard Hawks, built a chain of palatial movie theaters and made the what is widely considered be the greatest silent film, F.W. Murnau's Sunrise (1927).

Equally important, the timing was right. With digital technology revolutionizing the process of retrieving the past, information about Fox's life promised to become far more accessible. Indeed, electronic research tools have made this project not only feasible but also endlessly interesting. Especially valuable—make that absolutely essential—have been newspaper databases such as America's Historical Newspapers, which allow one to see directly how communities nationwide, both small and large, responded to the cultural lightning bolt of motion pictures. Here are ads aimed at the heartland, chatty newspaper articles about personalities both in front of and behind the camera and surprisingly rich coverage of industry trends. By the mid-1910s Americans had gone wild for the movies and their newspapers showed it.

Data from America's Historical Newspapers helped me solve one of my big challenges, which was to figure out how exactly William Fox became so successful so quickly as a movie producer. Previously a prosperous New York area exhibitor and distributor, Fox began making movies in mid-1914 and in early 1915 formed the Fox Film Corporation, based in New York. Within a year's time, he had catapulted into the industry's front ranks and was turning out one feature film per week. The standard explanation has been that Fox, with shameless disregard for traditional morality, zeroed in on the lowest common denominator with a series of lurid, sex-themed melodramas that naturally made a fortune. Principally, the claim goes, Fox created slinky "vamp" (short for female vampire) Theda Bara out of struggling actress Theodosia Goodman, a nice middle-class Jewish girl from Cincinnati, and foisted her on the public with a preposterous story about being an Arabian siren born in the shadow of the Egyptian pyramids. The more I learned about Fox, the more that explanation bothered me. A true believer in the American dream who longed to overcome his Lower East Side slum background, Fox craved respectability and was very proper—old-fashioned even—in his personal conduct: he had only one wife whom he loved devotedly and he considered religious faith to be the wellspring of his worldly success.

In fact, as evidence from America's Historical Newspapers shows, Fox didn't realize at first that he was making sensational movies—he thought he was making high-class art that bravely depicted important truths about human experience. His first big hit, A Fool There Was, which introduced Theda Bara and made her an overnight star, told the story of a happily married American diplomat who turns into a miserable drunken wreck after getting ensnared by a steamy seductress. Ads following the movie's release in January 1915 emphasized the credentials of the source material—noting that it was based on a hit play starring Robert Hilliard, which in turn had been inspired by a Rudyard Kipling poem—and touted the expensive costumes and fancy sets. The movie's male star, Edward Jose (sometimes misspelled "Hose") often got first billing. 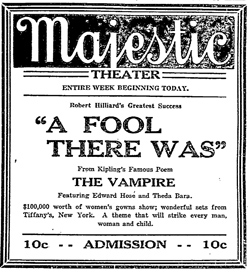 As for Theda, Fox initially tried to promote her as a celebrated European stage actress. That was nonsense, of course, and no less nonsense than the story about the Egyptian desert, but it was a distinctly different sort of nonsense. 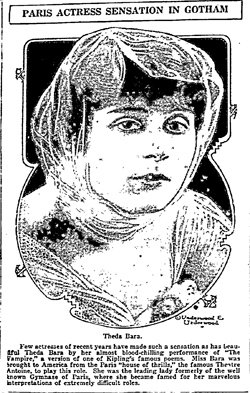 "Miss Bara was brought to America from the Paris 'house of thrills,' the famous Theatre Antoine..." reported The Lexington Herald. "She was the leading lady formerly of the well known Gymnase of Paris, where she became famed for her marvelous interpretations of extremely difficult roles." Publicity photos during early-to-mid 1915 showed Theda in stylish but demure clothing, with soft make-up and warm, friendly expressions. She was an artist, the Fox forces insisted. 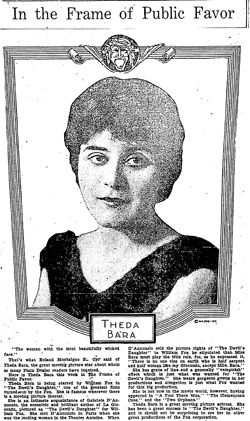 Curiously, movie audiences didn't want this story about Theda and, asserting control through ticket sales, they seized her image and ran away with it. Only her vampire movies drew crowds to the theaters, and as a local exhibitor told the Montgomery Advertiser in an August 8, 1915 article, many patrons preferred to believe that Theda wasn't acting: "there are women in Montgomery whom I have heard refer to her as 'a buzzard'." Fox got the message and, by the end of 1915, was advertising Theda primarily as "The Vampire Woman" and sending out publicity photos, such as this one for The Galley Slave, of her in skimpy costumes and alluring poses. 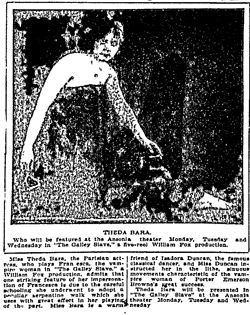 From that point on, Theda's image kept tilting more and more toward the occult, the arcane and the just plain weird, with references to an Arabian father, a shattering heartbreak in Europe and pets that included a whistling frog, a green cat from Peru and a sleep-walking orangutan ("Movieland," Montgomery Advertiser, February 29, 1916.) As Fox explained in a September 14, 1916 article in the Salt Lake Telegram, he was acceding to marketplace demand: "The public be pleased." Had he abandoned higher ambitions for the sake of money? Hardly. The story of Theda's background never stayed straight—sometimes she was Arab, sometimes French, sometimes Russian and sometimes even from Cincinnati—and the studio publicity scribes kept turning out stories wherein Theda kept trying to prove that she really was a nice person who simply worked very hard at her "art." Lest anyone doubt his motives, Fox stated them clearly in a May 14, 1916 article in New Orleans's Times-Picayune: "I shall hope and expect then to contribute to the permanent history of the screen things that will make my name entitled to the respect and attention of educated, well-bred people for generations to come."

So there it was: Fox had succeeded at first unaware of his formula and then with lingering discomfiture over the way his movies were perceived in certain circles. Meeting popular tastes where they were, he nonetheless longed to pull them up to a higher plane.

Information from America's Historical Newspapers points to a larger theme of Fox's career: the conflict between idealism and pragmatism. Ultimately, Fox would venture too far away from what he really wanted to do—shifting too much of his attention toward business and away from art, engaging in questionable stock market deals, and trusting people he knew he shouldn't trust. As a result, in 1930, he lost control of his two namesake companies, Fox Film and Fox Theatres. He never recovered, either personally or professionally. After that, history turned its back on him and began its long, sad process of forgetting.

Vanda Krefft, a former entertainment-industry journalist based in Los Angeles, is writing a biography of William Fox that will be published by William Morrow, an imprint of HarperCollins Publishers. For this work, she has been named a 2009–2010 Biography Fellow at the Leon Levy Center for Biography at the City University of New York; she has also received a Helm Fellowship from the Lilly Library at Indiana University, a grant from the Ludwig Vogelstein Foundation and an arts residency at Wildacres Retreat.