author of Native American Son: The Life and Sporting Legend of Jim Thorpe

Six months later, on January 22, 1913, a newspaper scoop in The Worcester Telegram in Massachusetts revealed that Thorpe had played minor league professional baseball in 1909 and 1910. Back then, “professional” was a dirty word because it meant money had changed hands. Only “simon-pure” amateurs were allowed to compete in the Olympic Games. Thorpe had signed the official International Olympic Committee (IOC) Entry Form, attesting that he had never played any sport for money and therefore qualified as an amateur.

At a time when so many organized sports were in their infancy, the ensuing reaction and repercussions, worldwide, would cause the Thorpe revelation to be dubbed the mother of all sports scandals. The modern Olympic movement was brand new; its first Olympiad had been in 1896. The identity and credibility of the struggling IOC as an amateur organization were seen to be at stake.

The American Athletic Union (AAU), co-functioning as the American Olympic Committee, as it was called then, saw itself as the vigilant guardian of the ideal of amateurism and led the rush to judgment. Mere days after the scoop, Thorpe confessed, and the AAU put his two gold medals and his challenge trophies on a ship back to Stockholm. Thorpe immediately turned professional officially, signing with the top baseball team of the era, the New York Giants.

One reason I wrote Native American Son: The Life and Sporting Legend of Jim Thorpe (Knopf, 2010) was to understand why this scandal and its aftermath continued to inspire heated passion and anger for the rest of the century and into the next. The story just would not die. With access to America’s Historical Newspapers, following publication of Native American Son, I was able to get a broader sense of the impact of the scandal in 1913, as recorded in U.S. newspapers of the time.

On January 5, 1913—17 days before the Worcester Telegram scoop—the Grand Forks Daily Herald in Grand Forks, North Dakota, pointed to the “marked revival” of interest in “athletics,” by which was meant track & field, inspired by the 1912 Games. The American team, led by Thorpe, had won “the greatest total of prizes in the history of international competition.” 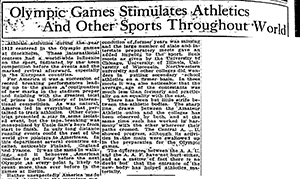 As the whole idea of Olympic international competition was not even a decade old, this was a rather vainglorious claim. However, it reflected the intense pride the American public took in the outstanding performance of their athletes on the world stage. The Lexington Herald in Kentucky on January 12 printed an even more hyperbolic rave: “… [Thorpe] has achieved great fame—greater as an athlete than has been the lot of any other man since the world began.” 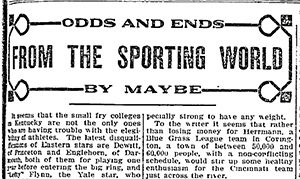 By January 25, newspapers across the country had picked up the scandal scoop: Colorado Springs Gazette: “Question is Raised as to Eligibility of Jim Thorpe”; The Evening Telegram, Salt Lake City: “Jim Thorpe Alleged To Be Professional”; The Daily Picayune, New Orleans: “Is Jim Thorpe A Professional? Charges Filed Against Indian Athlete Will Rob Him of Big Honors if Sustained.” 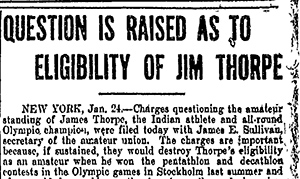 Two days later, corroborating testimony began to appear across the country as reporters and wire services tracked every twist and turn of the story. The Boston Journal gathered testimony from one of Thorpe’s former teammates: “Peter Boyle, the Rhode Island pitcher, declares that Jim Thorpe…played professional baseball in South.”

In a special report, The Philadelphia Inquirer, under the headline “Sure Jim Thorpe Played Baseball. Umpire … Says He Fears for Man Who Exposed the Wonderful Indian,” presented a detailed analysis of Thorpe’s lackluster baseball statistics during those two summers and the insistence by North Carolina newspaper editors that they all knew the great Olympian had played professionally in their state. A mystery, never to be resolved, was why no one had blown the whistle earlier. 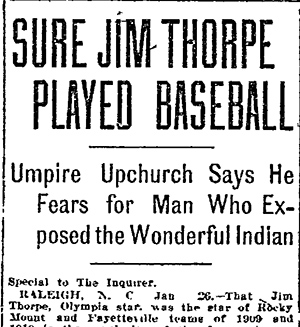 By January 28, Thorpe had confessed to the AAU in a letter signed by him, but written by his opportunistic coach, Glenn S. ‘Pop” Warner. The Kansas City Star’s lede that day was typical of many: “Nothing but expressions of sympathy were heard here over the plight of Jim Thorpe.”

The Wilkes-Barre Times Leader in Pennsylvania took it up a notch, describing the “bitter feelings over the way Thorpe was handled.” Cleveland’s Plain Dealer summed up the drama and the chagrin that shaped the story: “There is real tragedy in the tremendous fall of this man from the summit of undisputed athletic supremacy. Thorpe has brought humiliation to athletic America to take the place of the pride which has been felt for his achievements.” 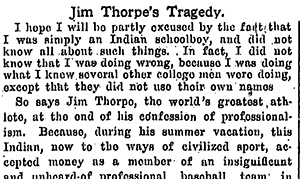 As the scandal’s details and ramifications became established to the public around the world, the core issue—that would have lasting influence on the history of sports in the twentieth century—came in for intense scrutiny: amateurism versus professionalism.

Under this headline in the January 29 Boston Journal—“Thorpe Ban Absurd, Says Red Sox Chief/Regards Rules As Neither Just Nor Sensible”—James R. McAleer, president of the Boston team, gave one of the most prescient analyses, and it’s worth quoting here at length:

“To me it seems absurd that Jim Thorpe should be considered a professional in track sports because he has played baseball professionally.

“… the conventional distinction between ‘amateur’ and ‘professional’ is … a survival from a conception of social life which the world has outgrown, just as it has outgrown the idea that kings rule by divine right … The notion that a professional baseball player cannot regard even his own particular game from a thoroughly sportsmanlike standpoint is merely silly. The professional understands the amateur point of view even though the force of circumstances compels him to regard it as a luxury which he personally cannot afford. He can turn to other branches of sport, however, and participate in them with just the same kind of pleasure and the same love of sport for its own sake which the best amateur of them all experiences.” 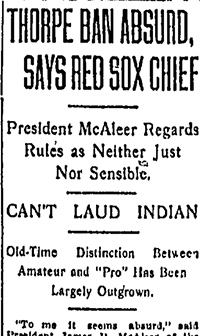 McAleer concluded by isolating both the core irony and fallacy of the scandal’s premise: “Thorpe’s baseball playing did him no good as a track athlete. In fact, baseball tends a little to stiffen a man up, and so unfit him for track athletics. If the contrary were the case, there might be a chance for an argument.”

On January 31 The Kansas City Star pointed to a key class distinction. “[T]he ways of the amateur officials are devious and strange,” it wrote. “Here’s Percy Haughton, recognized professional football coach [at Harvard], admitted to compete for the amateur racquet double championship, while Jim Thorpe is barred for playing minor league baseball.” The Daily Oklahoman stripped it down further: “the apparent definition of amateur is someone who does not have to earn his living.”

By February 2 newspapers across the country were reporting—and lamenting—the next big twist in the scandal: Thorpe’s signing with the Giants. “He has … acted unwisely,” wrote Alabama’s Montgomery Advertiser. “He must realize that the position came to him as a result of his shame. He has never shown enough as a baseball player to warrant his being signed by a major league club. Had he done so the managers of the majors would have been barking at his heels these last two years.” Giants’ manager John McGraw was derided as “a person of foxiness” who “realizes that if he advertises ‘Jim Thorpe will play today,’ more money will come to the privy purse of the Giant club.” 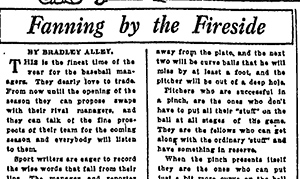 Though argument about Thorpe’s fall would continue for months, years and decades, by the second week of February newspapers began to step back and assess the greater and lasting legacy.

“[L]ong after the cheap skate whose information led to Thorpe’s undoing and the AAU officials who were so quick to act upon it are forgotten,” predicted The Anaconda Standard in Montana on February 9, “the wonderful exploits of James Thorpe at the Olympic Games in 1912 will be recalled and discussed by legions of athletes yet unborn.” 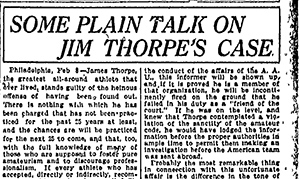 Kate Buford is the author of Native American Son: The Life and Sporting Legend of Jim Thorpe (Knopf 2010), an Editors’ Choice of The New York Times. The paperback was published in 2012 by the University of Nebraska’s Bison Books. She is also the author of the critically acclaimed and best-selling biography, Burt Lancaster: An American Life (Knopf 2000), an Editors’ Choice and Best Book of 2000 for The New York Times, Washington Post, and Los Angeles Times. The paperback edition (Da Capo Press, 2001) was named a “New and Notable Paperback” by the Times. U.K. hardcover and paperback editions were published by Aurum Press, the most recent edition in 2008. Prior to her writing career, she was the law librarian for Davis Polk & Wardwell and Cravath Swaine & Moore in New York.