When Benjamin Franklin Came Home: A Look at the Media Coverage of His Return

In the late afternoon of July 12, 1785, Benjamin Franklin, along with his two grandsons, set out on the approximately 125-mile trip from his home in Passy to the port of Le Havre on the northern French coast. They arrived on July 18 and set sail for England on the morning of the 22nd. Landing at Southampton on the 24th, Franklin spent a few days, as he had throughout the trip, being entertained by friends, dignitaries, and various well-wishers. Finally, on July 28, they set sail for America. The passage was quite swift, with Captain Truxton’s ship, the London Packet, arriving in Philadelphia 48 days later on September 14. Franklin recorded the arrival in his diary: “My son-in-law came with a boat for us, we landed at Market Street wharf, where we were received by a crowd of people with huzzas, and accompanied with acclamations quite to my door. Found my family well.” [1] 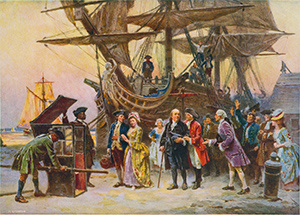 Franklin spent much of his adult life outside of his native country, including two long stays in London from 1757-1762 and 1764-1775. Less than two years after his second return, he was dispatched to Europe again, this time to the court of Louis XVI at Versailles. As Minister Plenipotentiary, Franklin was tasked by the Continental Congress with negotiating with the King and his ministers for both recognition of the colonies’ independence and, more importantly, financial and material support. Through the force of his personality and a mastery of the psychology of diplomacy, Franklin extracted far more money from Louis XVI than the financially troubled monarch had to give. His efforts in gaining French support–financial, material, and military–were widely recognized by his fellow Americans as crucial to their military victory and the securing of independence. When he finally arrived home at Philadelphia in the fall of 1785, he was welcomed as a returning hero.

Acclamations, both private and public, followed for weeks after his return. Along with letters from George Washington, John Jay, Thomas Paine, and numerous other notables welcoming him home, official addresses abounded from the city’s sundry institutions, many of which he had either helped found or been a member, including the University of Pennsylvania, the state militia, the Assembly, the Justices of the County of Philadelphia, The Constitutional Society, and the Freemasons. These addresses, along with Franklin’s replies, were first printed in Philadelphia’s newspapers and then reprinted throughout the colonies in the weeks to come.

Two aspects stand out in the media coverage. The first is the genuine gratitude and admiration which the city (and country) had for Franklin and his achievements in France on behalf of the Revolution as evidenced in the official addresses mentioned above and the general media coverage of his return. Franklin’s return merited an entire page of coverage in more than one Philadelphia newspaper. Meanwhile, many newspapers in Massachusetts and New York printed some or all of the addresses in addition to numerous other news items, as did other newspapers from smaller towns throughout the colonies. The second aspect that stands out is the hope and expectations of some Pennsylvanians regarding the effect of Franklin’s return on the state’s own political situation. Pennsylvania was a politically divided state. Ever since the radical first state constitution of 1776, its opponents (alternatively known in the scholarship as “Republicans,” “anti-Constitutionalists,” and “moderates”) had sought to call a new convention to replace it. Yet, through 1785, the radicals had stymied any attempt at a new convention. By the time of Franklin’s return, however, the anti-Constitutionalists had been making gains both on the ground and in the Assembly. [2] 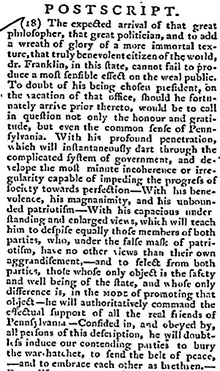 Many who were dispirited at the state’s political polarization saw in Franklin’s return an opportunity. He had been a true republican servant, universally admired for “his benevolence, his magnanimity, and his unbounded patriotism.” [3] Hence, it was hoped––if not expected, by some––that the return of the “Father of American Independence” could not help but have an ameliorative effect on the state’s factional political strife. [4] For, unlike the local self-interested politicians that dominated state politics, Franklin was “a man of sufficient weight to command the implicit obedience of both sides” and “restore harmony to Pennsylvania, by checking and controlling the phrenzy of oppression and party.” [5] Indeed, one writer saw Franklin’s “opportune arrival” in providential terms: “Lo! as if heaven directed, A FRANKLIN makes his appearance, encircled with multiplied trophies (singular fate) envied by none. ––He thus forms the centre of union to which the fervent wishes––the boundless hopes–– of every real patriot are directed.” [6] 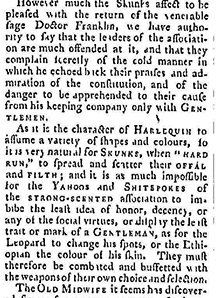 Yet, while many disinterested persons praised Franklin in a similar (if less dramatic) way, the leaders of both parties appear to have been wary of his return to Pennsylvania politics. After all, Franklin had played a role in the creation of the Constitution of 1776 and many anti-Constitutionalists expected he would vigorously defend it. The radicals, on the other hand, believed Franklin’s expressions of “admiration of the constitution” and his responses to their welcome had been delivered in a “cold manner” and were further aware of “the danger to be apprehended to their cause from his keeping company only with GENTLEMEN.” [7] But Franklin could not have been less inclined to engage himself in the day-to-day business of factional politics. 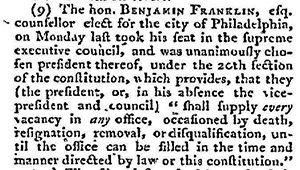 Though he had hoped for “Ease and Rest” upon his return, Franklin was immediately prevailed upon to both run for a seat on the state’s Supreme Executive Council and to fill its position of President, the titular head of the state. Franklin himself was aware that he was being chosen by many “from an Opinion that I might find some means of reconciling [the two parties].” Of this task, Franklin wrote, “I apprehend they expect too much of me,” and worried that he would “find [himself] engag’d again in Business more troublesome than that I have lately quitted.” [8] Nevertheless, he won election to the Council and served as its President until 1788. [9] Franklin would, of course, go on to play a mostly symbolic role at the Constitutional Convention held in Philadelphia in the summer of 1787 and lend his name and whatever efforts he could to causes he deemed worthwhile including serving as the President of the Pennsylvania Society for Promoting the Abolition of Slavery in 1787. In that capacity, two months before he died, Franklin drafted and signed an abolition petition “for the relief of those unlawfully held in bondage” that was presented to the Congress in New York and asked them to “devise means for removing the Inconsistency [of slavery] from the Character of the American People." [10]

[9] Pennsylvania Evening Herald, October 19, 1785, 3. Often in ill health, Franklin appears to have only attended about twenty percent of the Council’s sessions during his term as President, twice being absent for more than two months consecutively. Charles Biddle, the Secretary of the Council, wrote in his memoirs: “The Doctor, being at this time very much troubled with the stone, seldom attended Council; nothing, however of any consequence was done at the Board without consulting him; and I called on him almost every day to see if he had anything to propose.” Charles Biddle, Autobiography of Charles Biddle, Vice-President of the Supreme Executive Council of Pennsylvania. 1745-1821 (Philadelphia: E. Claxton and Company, 1883), 198.