During the 1828 presidential election, Andrew Jackson came under attack for a number of reasons: his violent temper, his execution of U.S. militia and foreign nationals during the 1810s, and even the questionable circumstances of his marriage to his wife, Rachel. Often overlooked was the question about Jackson’s southern identity. During the final six months of the 1828 campaign, newspapers across the nation were filled with attacks and counterattacks about whether Jackson fit the expectations of a southern planter.

Two main questions about Jackson’s southern identity drew the attention of the nation’s media: Old Hickory’s slave mastery and his support of southern disunionism. Critics highlighted accusations that Jackson had been a slave trader prior to the War of 1812, which Jackson denied. This charge called into question his moral judgment and fitness for office. “There is no charge which ought to affect more seriously the reputation and prospects of General Jackson than that of speculating in slaves,” the Daily National Journal (Washington, D.C.) declared in mid-October. “Could the people of the U. States, under the influence of a momentary infatuation, elevate to the first office in the nation a man who had been engaged in carrying slaves from one State to another, for the purposes of traffic and profit,” the editorial continued, “ages would be insufficient to wipe away the foul stain from the annals of our republic.”

One of Jackson’s fiercest political enemies in Tennessee, Andrew Erwin, wrote several editorials in Nashville newspapers that entered the national press and were eventually compiled into pamphlets to be distributed to voters. His comments centered on Jackson’s involvement in the immoral slave trade. “Traffic in human flesh,” Erwin wrote, “seems now to be generally condemned by all the civilized nations under the sun.” Even the slaveholding states of the American republic generally “prohibited” the “buying, selling and transferring of slaves as merchandize;” where it was permitted, it was “becoming exceedingly odious.” The “humane slave holder . . . detests it as cruel and subversive of the dearest ties of domestic affection,” while those who were not slave owners considered it “war with human rights, republican principles, and every feeling of the human heart.” According to Erwin, Jackson’s slave trading might have led others to bring a “reproach” on him as a “private citizen,” but it demonstrated his “total disqualification and unfitness for office” as a public man. 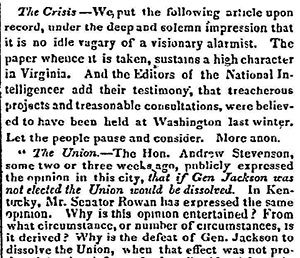 Another related criticism was the death of one of Jackson’s slaves, Gilbert, at the Hermitage in 1827. Detractors pointed out that Jackson’s overseer had murdered Gilbert and that Jackson had encouraged the violent environment that allowed the murder. One Nashville newspaper editor sent Daily National Journal editor Peter Force a letter explaining that Gilbert’s death “grew out of an order given by the Genl” to apply “1000 lashes” to the runaway slave and that Jackson had ordered the circumstances of his death “hushed up.” Jackson’s complicity in the slave’s death was unproven by the evidence, but that fact did not deter opponents such as Andrew Erwin: “I never had a slave brought before me for offending, against whom I gave an unmerciful sentence, such as you are said to have done at or near your own fire side at the Hermitage.” 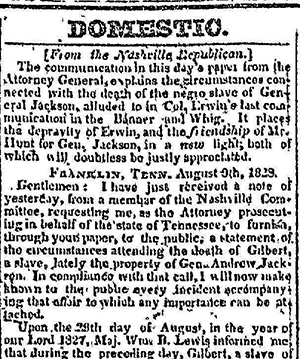 A second question about Jackson’s southern identity arose following passage of the 1828 tariff, which elicited significant vocal opposition from white southerners, especially in South Carolina. Rumblings against an over-expansive national government spread throughout the South and provided rhetorical ammunition for President John Quincy Adams’ reelection campaign. Pro-administration newspapers suggested that Jackson was going to lead a southern army of 100,000 men in a military coup and that 50,000 bayonets would be used against the American people “to force them to obey a President selected by a few ambitious, restless, covetous partisans.” Charles Hammond, one of Jackson’s chief critics, used his Cincinnati Gazette newspaper to vilify Jacksonian newspaper editors for ignoring the danger that South Carolina’s anti-tariff rhetoric posed to the Union. They were willing to turn a blind eye to their South Carolina neighbors and “countenance negro trading” by supporting a candidate “bound neck and heels to the slave interest of the union.” Electing Jackson, in other words, was tantamount to dismembering the Union, or at the very least, condemning it as a failed experiment in republican liberty. Pro-Jackson newspapers retaliated by charging the Adams supporters with seeking to steal the election through salacious fabrications and wanting to incite slave rebellions that would lead to the murder of southern slave owners. 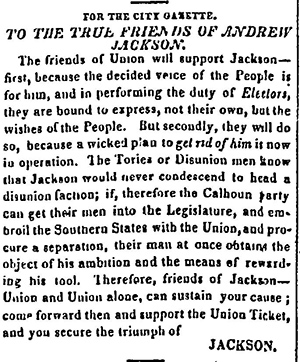 During the course of my research for Andrew Jackson, Southerner (LSU Press, 2013), and especially as I examined the 1828 presidential campaign, it became clear that newspapers still offer new and fruitful ways of rethinking the Jacksonian period. While I was able to physically visit archives, such as the Library of Congress, to examine some of the newspapers, I also used online access to look at others. The availability of searchable newspaper databases was immensely helpful in tracking down some of the editorials I was unable to find in hard copy and will be increasingly beneficial to Early Republic historians.

Mark R. Cheathem is an associate professor of history at Cumberland University in Lebanon, Tennessee. His Andrew Jackson, Southerner was recently published by LSU Press. He blogs about his research and teaching at Jacksonian America.